The prestigious ‘Corral de la Morería’ has hosted the program presentation of the 59th ‘Festival Internacional del Cante de las Minas’, which will take place between July 31st and August 10th, 2019, in La Unión (Murcia). The act was led by Pedro López Milán, president of the ‘Fundación Cante de las Minas’ and mayor of La Unión. 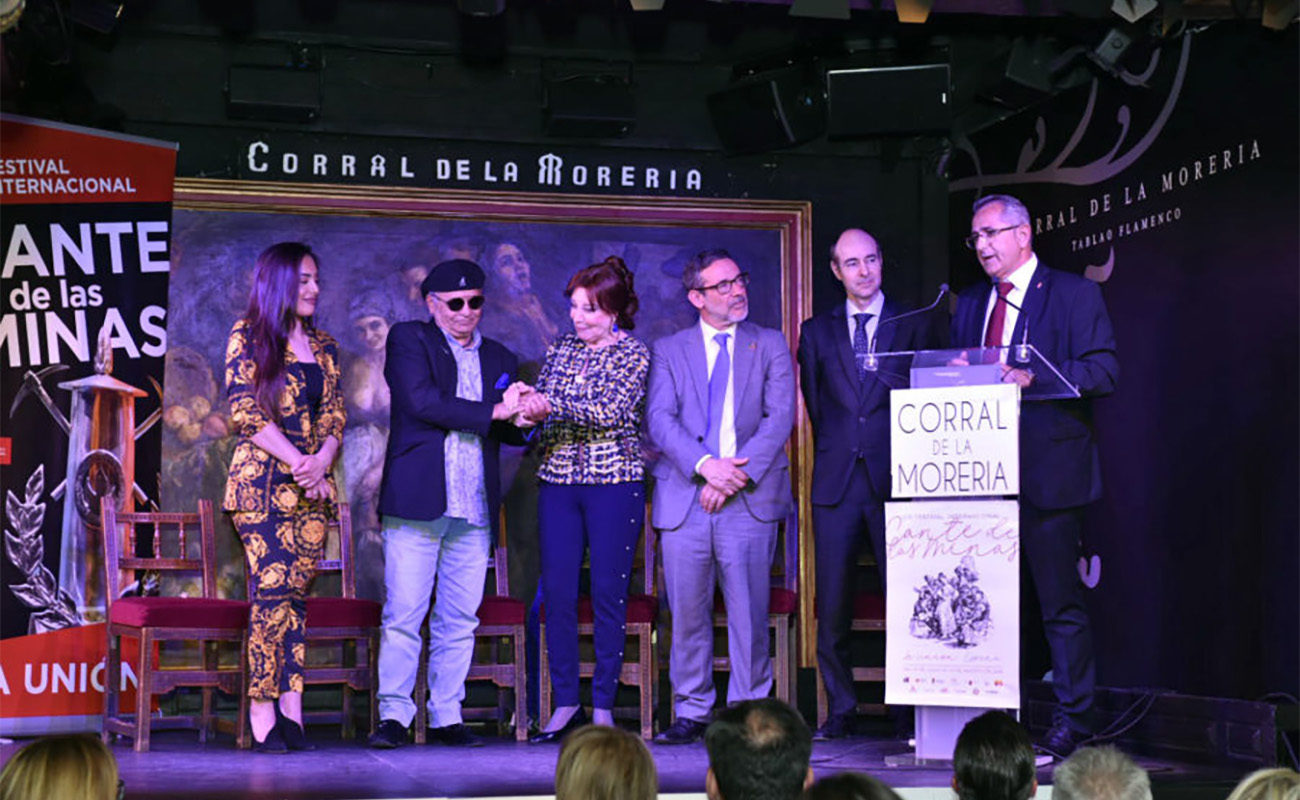 The prestigious Corral de la Morería has hosted the program presentation of the 59th Festival Internacional del Cante de las Minas, which will take place between July 31st and August 10th, 2019, in La Unión (Murcia). The act was led by Pedro López Milán, president of the Fundación Cante de las Minas and mayor of La Unión. López Milán was joined by Blanca del Rey, owner and artistic director of the Corral de la Morería, and Juan Manuel del Rey, its manager. Francisco Javier Jiménez, delegate of the Government of the Murcia Region, and Alba Heredia and El Pele, two artists who will perform in the festival’s galas, were also present.

«A different festival born in strength at La Unión in 1961, product of hardships, with the sole mission of protecting those cantes de levante, which have attracted the best flamenco artists from its early days. A tablao which will bring a lot of success to its winners», stated Pedro López Milán at the presentation.

Awards of the 59th edition

The Fundación Cante de las Minas has awarded the 2019 Honorific Desplante prize to the above-mentioned Blanca del Rey for her contribution to the festival. One of her biggest efforts was splitting the 2018 Desplante prize into male and female categories. «I’ve suffered much for many years seeing how unjust it was that male and female dancers competed with each other, because anyone who dances does so with freedom», stated Del Rey.

The Castillete de Oro — the highest accolade awarded to personalities who have promoted flamenco art — was given to José Domínguez ‘El Cabrero’, an artist who, despite being one of the great stars of cante jondo since 1980, still works as a goat herder (cabrero). The Asturias Central Brigade of Mining Rescue was given the same award, due to its heroic work in mining accidents and subterranean rescues.

Besides, the Republic of Argentina was awarded the prize Catedral del Cante through its capital, Buenos Aires, for its role as a flamenco reference in South America. The Foundation highlighted great similitudes between flamenco and tango, which is also one of the basic palos with particular styles in Granada, Cádiz, Jerez, Málaga and Triana.

The 59th edition of this festival opens on Wednesday, July 31st, with the Jornada Prólogo Gala de La Unión, to be held at the Old Public Market, featuring the Agrupación Musical La Unión and Cora Argentum, who will perform the hymn of La Unión, and the Rondalla y Coro del Hogar de la 3ª Edad, who will perform the hymn of the festival. The Escuela de Baile Artedanza will also perform. This gala will be closed by Óscar de Manuel with La Unión musical ensemble.

On Thurdsay, August 1st, Aída Gómez, pregonera of the 59th Festival Internacional del Cante de las Minas, will open the Inaugural Gala by reading the pregón. This will be followed by performances of the winners in the last edition of the festival: María José Carrasco (awarded the Lámpara Minera), Andrés Barrios (awarded the Filón piano), Agustín Carbonel (awarded the Bordón Minero), Mónica Iglesias (awarded the Desplante femenino), Hugo López (awarded the Desplante masculino).

The evening of Tuesday, August 6th, Flamenco en la Mina returns.  La Mina Agrupa Vicenta will host the performance by the winner of the 2015 Lámpara Minera award, María José Pérez. Next, on the stage of the Public Market, the galas will be back, with Pedro El Granaíno — Granaíno Jondo — and Farruquito —Improvisao.

The semifinal galas of the contest which will reveal the prizes awarded by the Festival del Cante de las Minas — Lámpara minera, Bordón, Filón and Desplante — will take place on Wednesday 7th, Thursday 8th and Friday 9th of August. The final gala, reveling the winners of the prizes in all categories in the 59th edition of this festival, will be held on Saturday, August 10th at La Unión Public Market.

«The festival belongs to everyone and we need the support from all administrations. From them we must defend and preserve flamenco», explained Pedro López Milán. He also wished to thank the Fundación Lázaro Galdiano for its good disposition and commitment to allow the work of Francisco de Goya y Lucientes to be used in the illustration of the official poster of the 59th edition of the Festival. 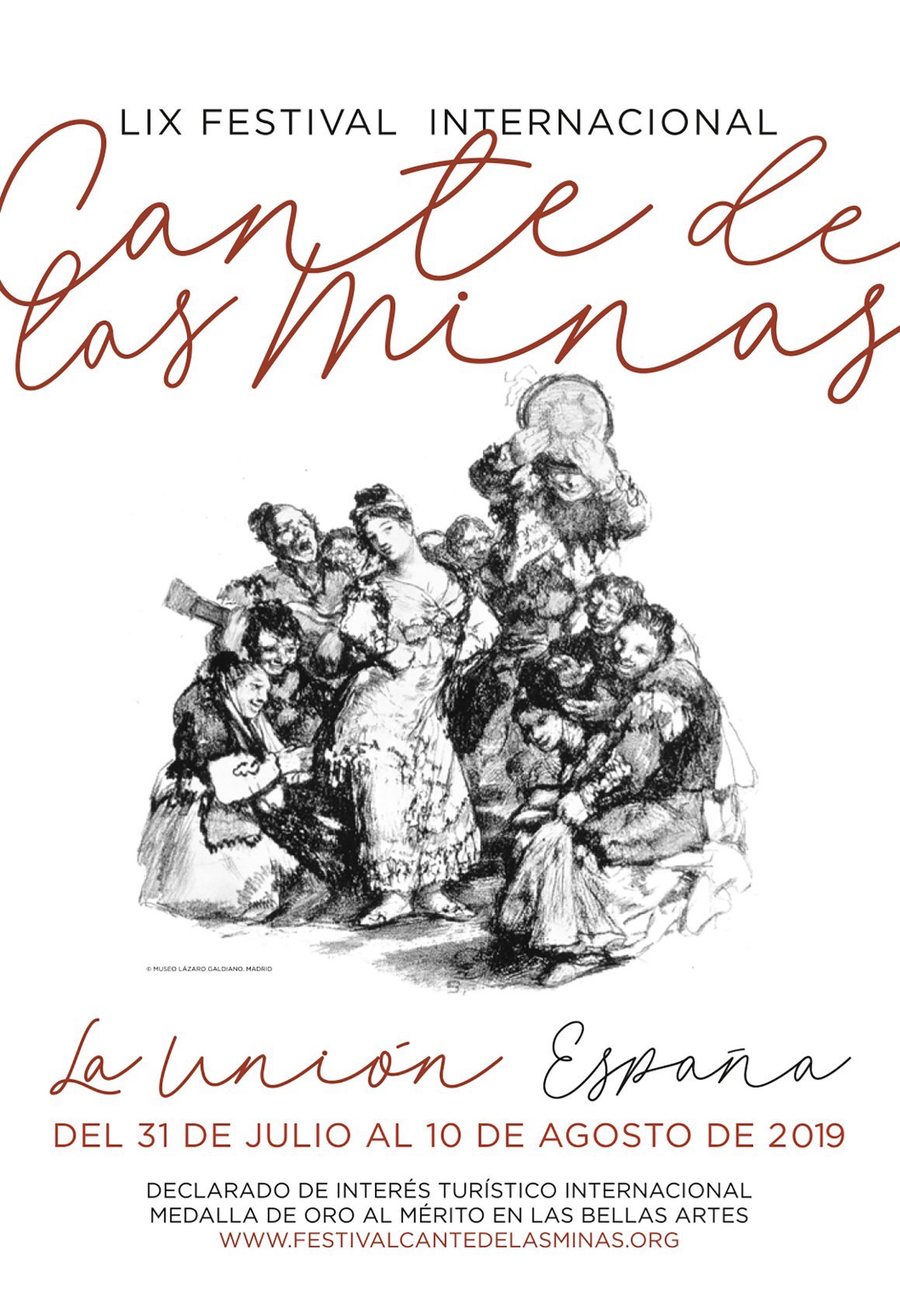