The new edition — the sixth — of the Encuentro Internacional de Guitarra ‘Paco de Lucía’ will take place between July 24th and July 28th, 2019, in Algeciras, birthplace of the mythical guitarist. This is an event which, according to José Ignacio Landaluce – mayor of Algeciras–, reached ten million people in the media and social networks in its previous edition.

The sixth edition follows the same format as its predecessor:  a series of five concerts at Parque María Cristina and many other complementary activities. Around twenty courses of guitar, cante, baile and compás at the Municipal School of Dance and Theater ‘José María Sánchez-Verdú’, exhibitions, projections and conferences in the documents center, and baile at Plaza Alta. As if that wasn’t enough, the second Reconocimiento Internacional ‘Guitarra Especial de Algeciras’ will be awarded.

The event will get started on July 24th with the performances of guitarist Manuel León and cantaora Alicia Carrasco in their show Mujer Klórica: los bienes de la tierra. The following day, the stage will welcome a Raimundo Amador in his 60th anniversary tour Directo a casa. Besides, after is performance there will be a guitar recital, Trío, with Antonio Serrano, Antonio Sánchez and José del Tomate. On Friday, July 26th, Sara Baras show Sombra will be staged. And on Saturday 27th Noche flamenca will be performed by cantaores Pansequito, Aurora Vargas, María Terremoto and Perico El Pañero. The last concert will be on Sunday 28th with the show Esencias by the pianist Dorantes and cantaora Marina Heredia.

It’s a unique event with flamenco as its sole protagonist. A masterful tribute to the magical Paco de Lucía. The poster of the even was designed by Ramón Sánchez — nephew of this guitarist — and is based on a painting by Algecira’s painter José Barroso. 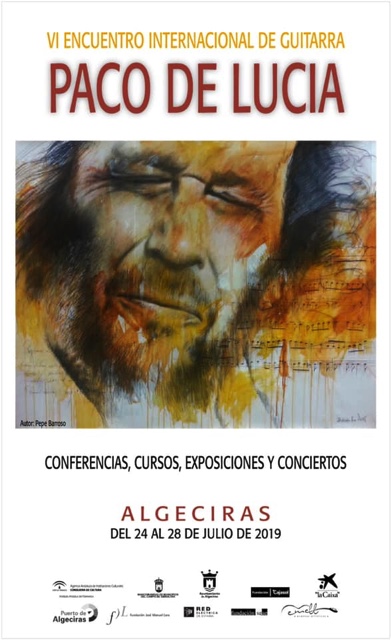