Cádiz’s City Council presents a flamenco festival from November to December 2019 with over thirty events that include workshops, expositions and master classes 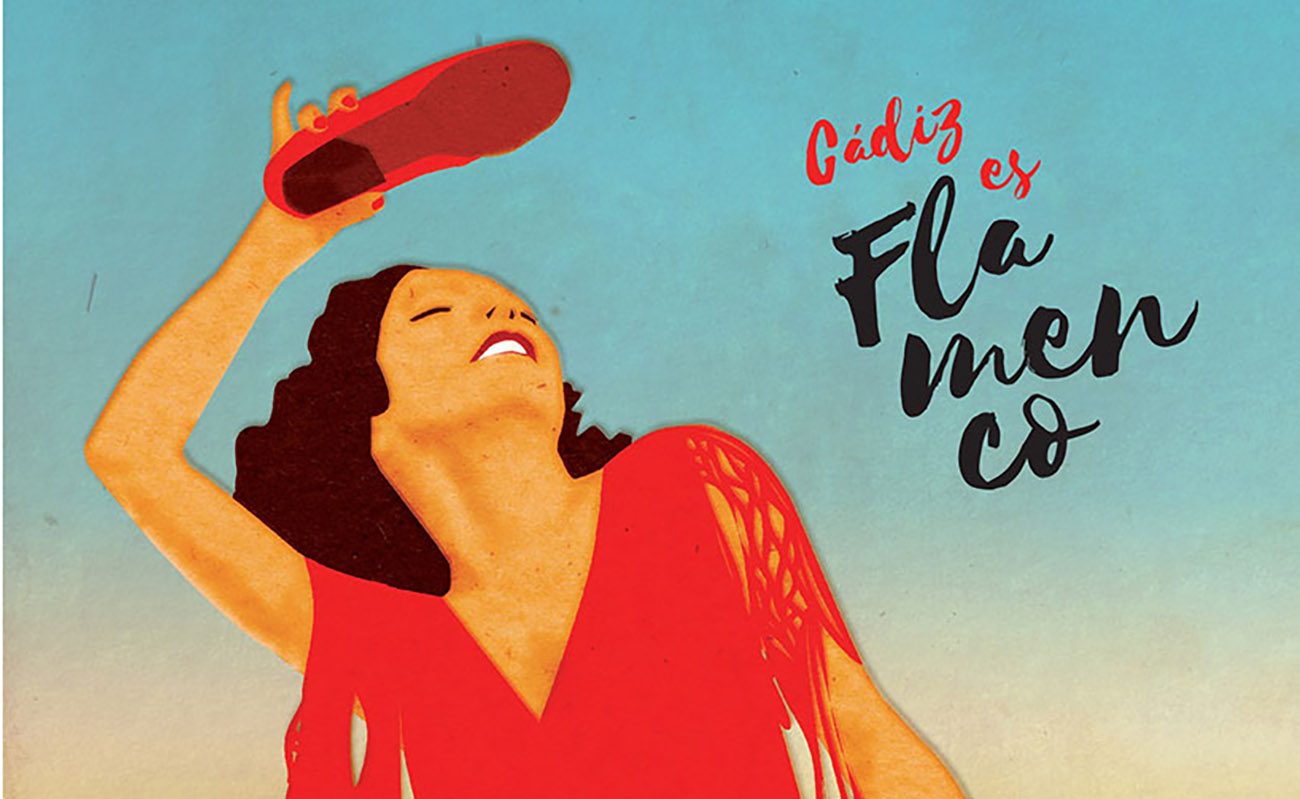 There is a new edition of the Flamenco Heritage Festival. On this occasion, it’s the city of Cádiz that is hosting this event, which takes place from November 6th to December 2nd, 2019. Flamenco will be on the spotlight in this provincial capital featuring over thirty events, with twenty-four activities, ten workshops and master classes, and two exhibitions. The performances of El Capullo, La Fabi, Daniel Doña, Carmen de la Jara, Rosario Toledo, David Carpio, Marco Flores, María del Mar Fernández, Ketama and the party 50 años junto a Juan Villar are noteworthy.

The festival was presented by Monte Mures, councillor of Cádiz Tourism, and Carolina González, coordinator of Centro Flamenco de La Merced. «When people forget their history and their roots, they’re unable to recognize themselves in the mirror. There were many attempts to erase the memory of Andalusia and Cádiz, our land. They tried to conceal, disguise and hide its origins, but they were unable to, because of flamenco», stated Mures in the presentation. «It’s in flamenco where the Gypsy, black and moor roots got blended. Listening to flamenco is listening to history. The real history, the history of the people on the streets, a history that is often ignored in the history books», she added.

One of the goals of the festival is to «portray the potential of our city in an art genre that we consider as our heritage and thus deserves to be protected and cared for, remaining alive, growing and evolving, as this is the only way for it to endure for a very long time», stated González.

Local and national artists get together in a festival that features all kinds of flamenco, from the most traditional to the most innovative, featuring young artists with potential or with an extensive professional career. As usual, the Centro Municipal de Arte Flamenco La Merced will be the epicenter of the festival, although the aim is to take flamenco to other public and scenic places around the city.

The quarry is the future, so it’s no surprise that once again this festival features a flamenco workshop for children. There is also the workshop Escribir flamenco (Writing flamenco), with the collaboration of Miguel Ángel Argüez, and there’s even a workshop to learn how to make a guitar. Then there are the usual master classes of cante, baile and flamenco guitar.

Admission to all the workshops and classes is free. The expected attendance is between fifteen to twenty people, depending on the particular class or workshop. Classes have two levels: an intermediary level, with a deadline for registration, and another level aimed at the general public, with registration on a first-come, first-served basis until reaching capacity.

Registrations can be downloaded from www.cadizesflamenco.com  and the filled application must be emailed to cadizesflamenco@gmail.com

Finally, all flamenco aficionados will be able to enjoy two exhibitions held at the Centro de Arte Flamenco de La Merced: ‘El duende desnudo’, an exhibition of photography and painting by Julaj Horniak, and ‘Flamencos con Mariana’, with photographs by Joaquín Hernández Kiki.

Admission to all shows is free until the capacity is reached and are intended for all age groups unless stated otherwise. 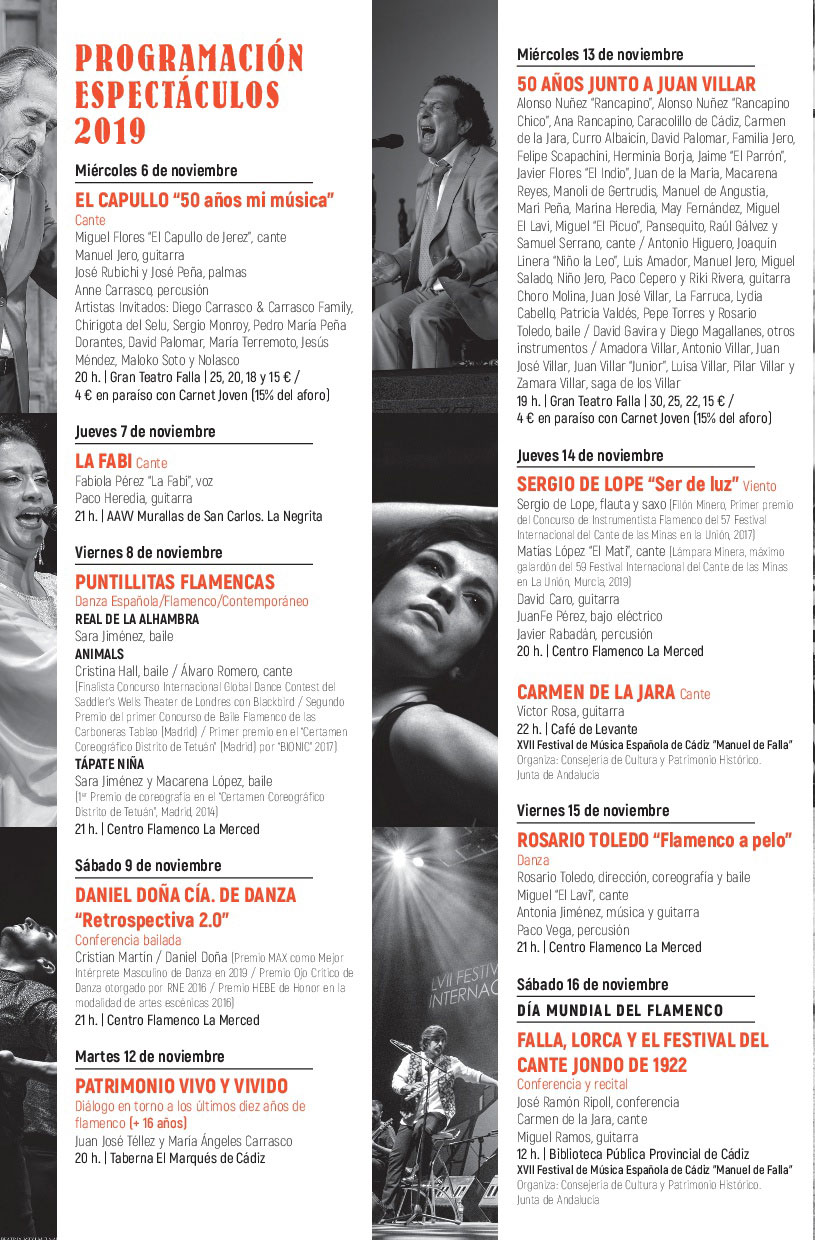 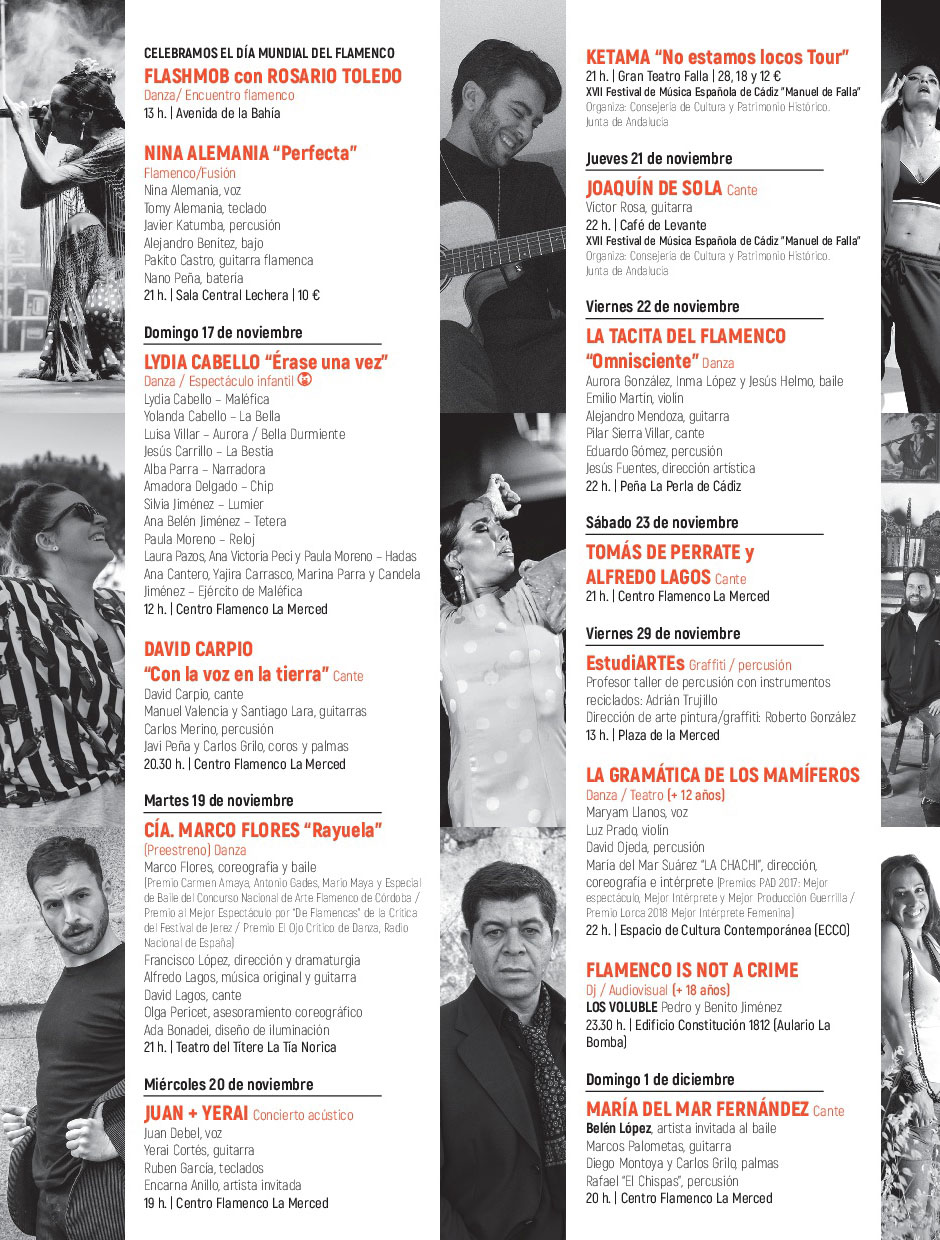 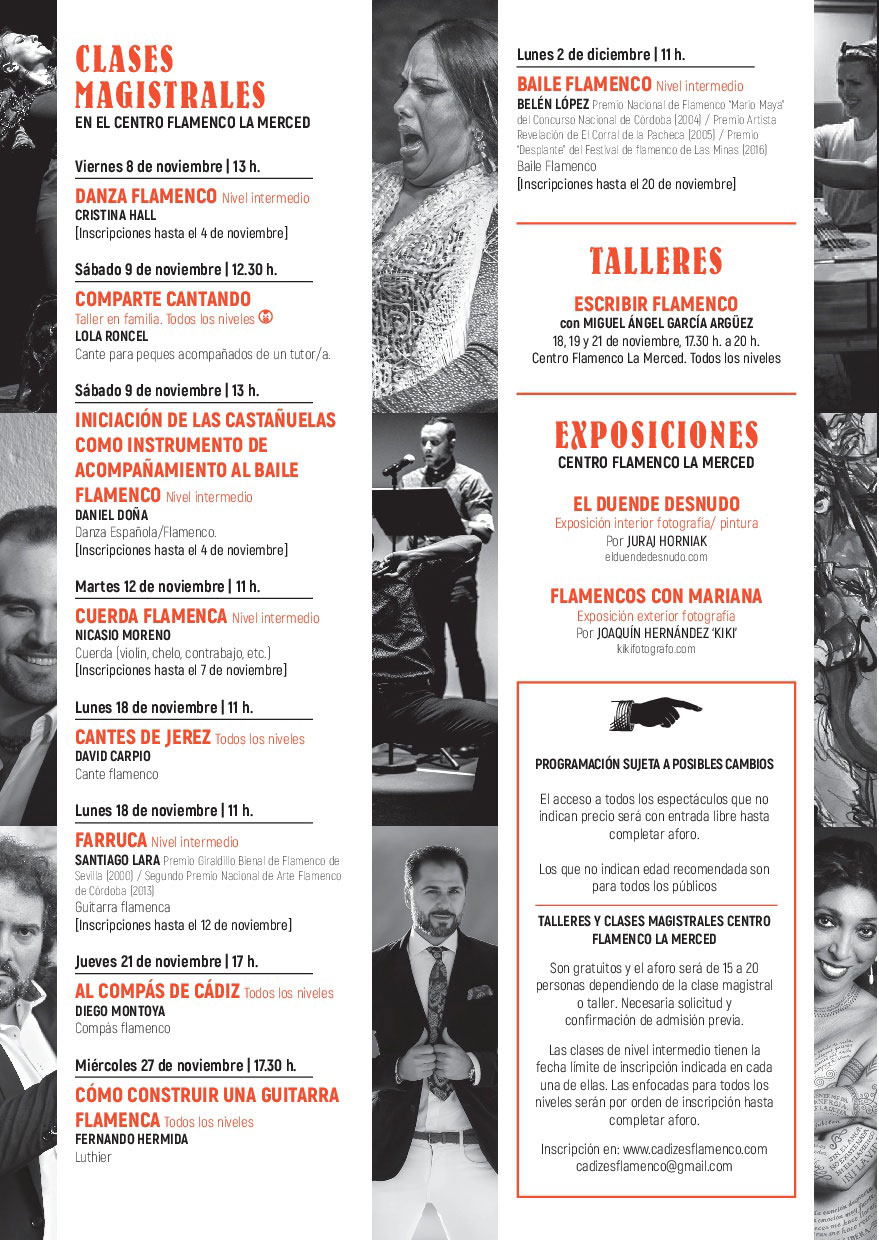 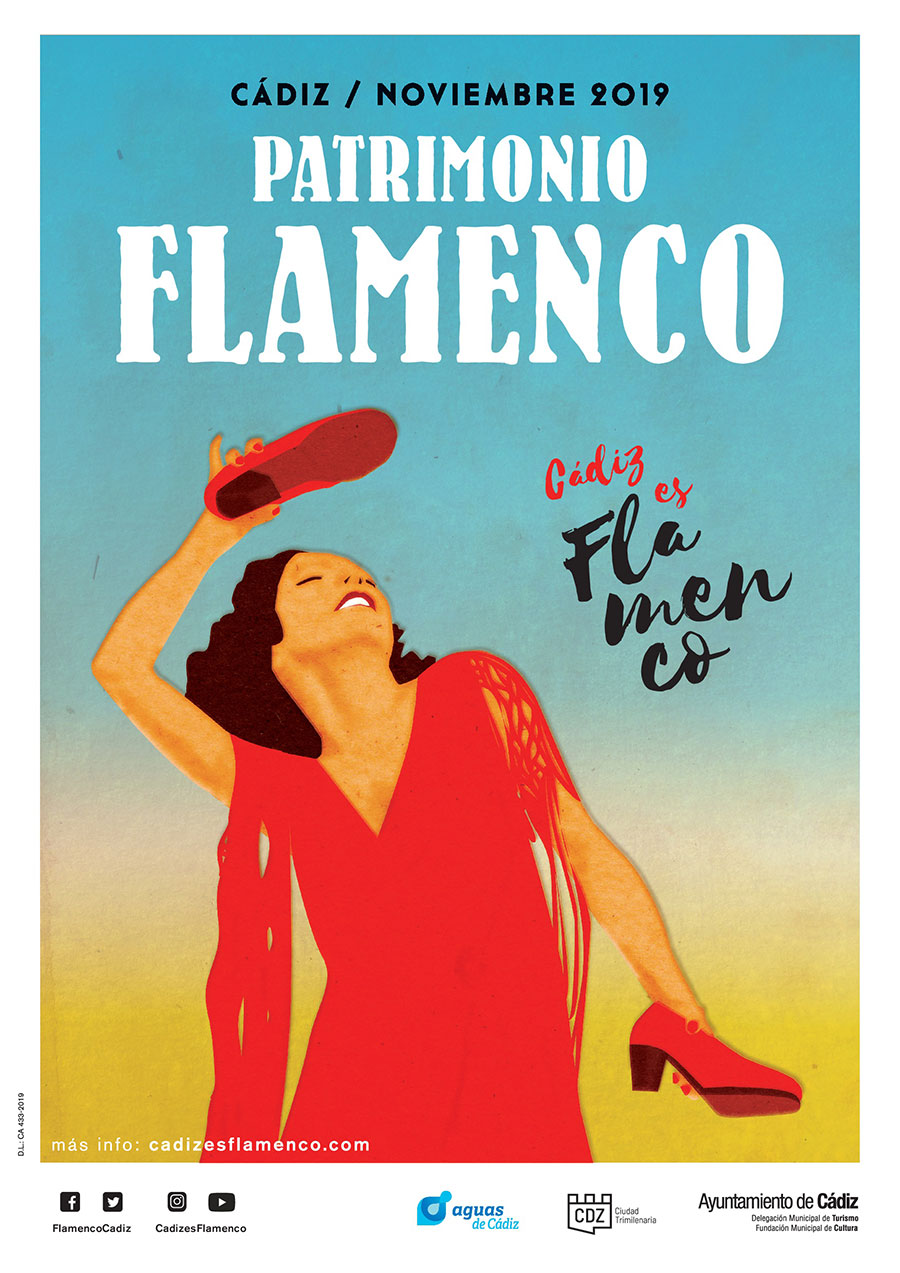