Despite being paralyzed by polio, Lola López, a 55-year old bailaora, moved from Barcelona to Seville to enjoy her passion, thanks to the program ‘Flamenco inclusivo’ by bailaor José Galán. 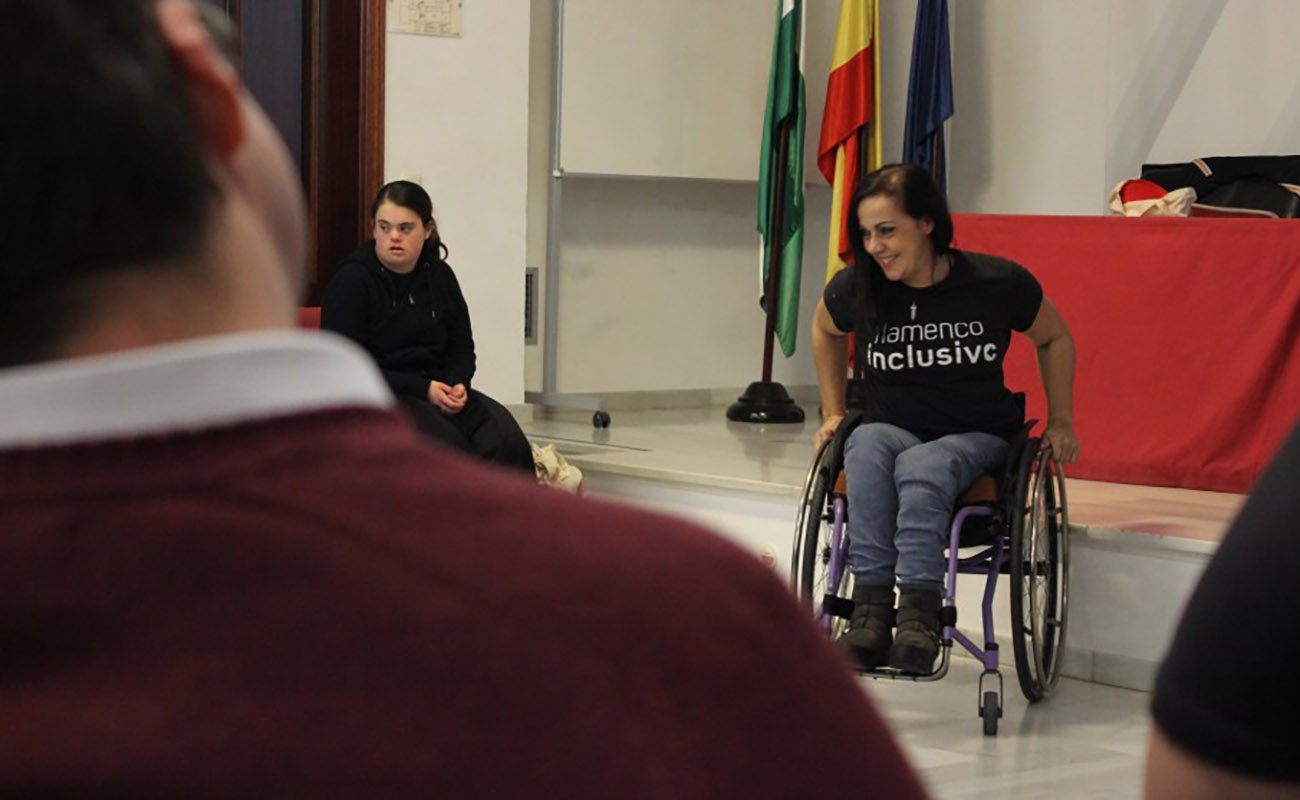 In ExpoFlamenco we always speak of flamenco as a global art genre, because it has no boundaries and it reaches all corners of the world. For Lola López, a 55-year-old bailaora from Barcelona, flamenco has been a way to escape, as told in a beautiful article by Ana Carrasco González published in EUSA‘s university newspaper.

When she was just six months old, Lola López contracted polio, an infectious disease which causes muscular atrophy and paralysis after attacking the spinal cord. In her case, only one leg was affected, but when she was forty years old, she started to lose mobility in her second leg, requiring a wheelchair to move around.

Far from feeling intimidated by her difficulties, Lola entered the world of flamenco. «I registered in an academy of baile. When I came to class, my teacher didn’t believe I was her student, assuming there had been a mistake. During the whole class, I feel rejected when I tried to dance», explained the bailaora in that article.

«Rejection hurts», admits Lola. Yet, all she needs is her wheelchair and her art to express all the flamenco she has in her. In 2017, while she was still living in Barcelona, she found out from the social networks during the Festival de Jerez about the program Flamenco inclusivo, conceived by the bailaor and teacher José Galán. She didn’t think it twice and travelled to Seville to start her lessons.

«I don’t limp or stumble, I don’t fall, and I feel nimble», says Lola. This artist dances using the breaks and turning the wheels of her wheelchair.

She’s been living in Seville since 2018 and is enjoying her flamenco lessons. «I don’t limp or stumble, I don’t fall, and I feel nimble», says Lola. This artist dances using the breaks and turning the wheels of her wheelchair, she heel-taps and moves with elegance, showing that flamenco goes well beyond physical abilities.

«The fact is that there have been numerous artists in the past who had different disabilities. That’s the case of Niña de la Puebla (who was blind) or Enrique el Cojo (literally, Henry the Lame). Just imagine how hard is to do footwork being lame! This artist sought to find balance in a different way, making greater emphasis in his upper body and arms. The fact is that when something wears out, we must compensate in some other way. This is very interesting, that’s why I say that diversity enriches flamenco and contributes new perspectives. That’s the reality», explained José Galán himself in an interview for infomedula.org.

For three years, José Galán has taught his flamenco inclusivo workshop in Seville. Now, thanks to the backing of Fundación Unicaja, he’s also teaching it in Cádiz until June 2020. This project is aimed at people with any type of disability, be it intellectual, physical or any kind of mental illness.

In this workshop, dance becomes a therapeutic tool aiding the development of physical and psychological abilities, focusing on aspects such as coordination, balance and rhythm through music. The activities aim to teach and express flamenco through body positioning and the handling of rhythm, allowing for improvisation as an expression of each individual, without any limitations.