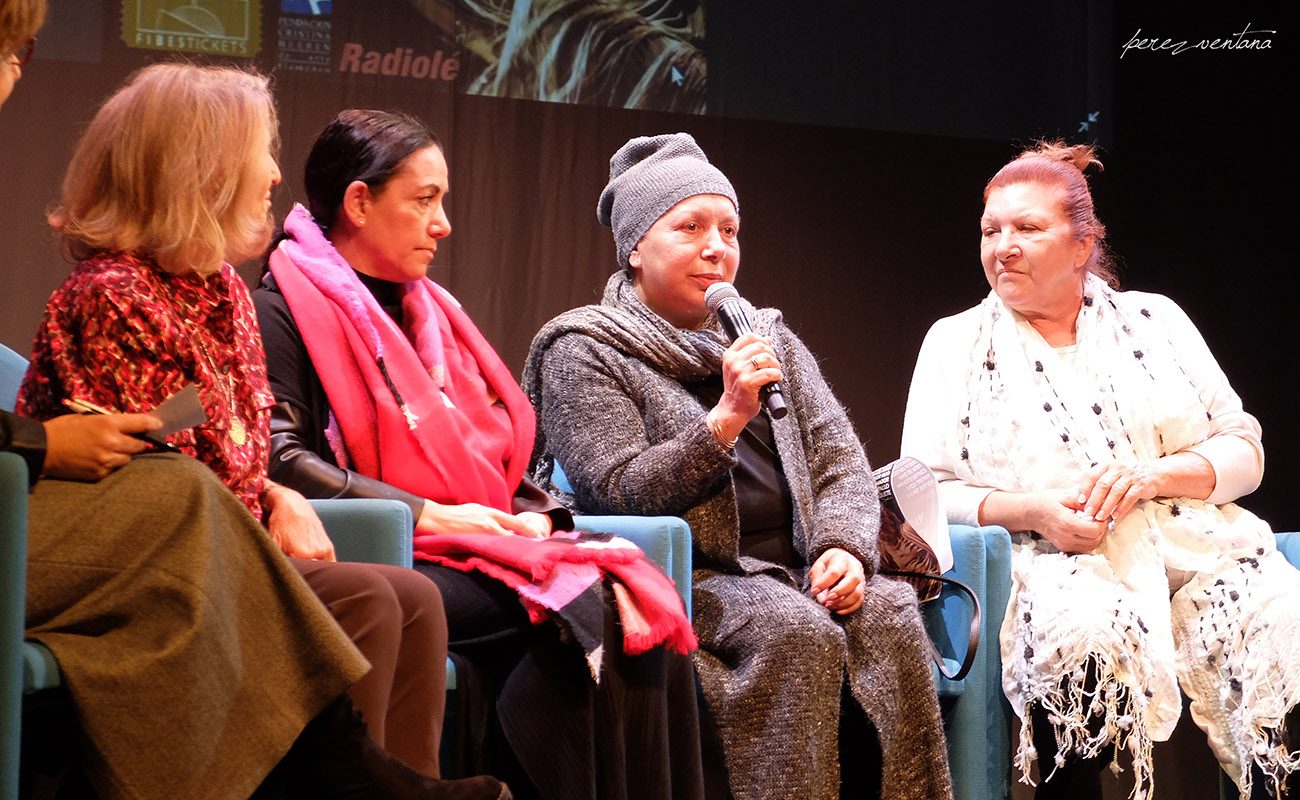 «My time is up and I’m quitting the stages». Carmelilla Montoya is saying farewell to her professional career for health reasons. But she’ll do it while being honored by over fifty artists with whom she’ll share a special gala at Seville’s Fibes Auditorium on December 5th at 9 PM. Some of them joined the presentation of this event to the media, an act which took place in the theater of the Cristina Heeren Foundation, an entity which is collaborating with this charitable show.

Eva Yerbabuena explained that “Carmen is a strong woman, a role model for everyone”. «We, flamencos» — she added — «are not just getting together to honor a professional career, because what makes an artist great is the person behind it». This same sentiment was expressed by bailaora Milagros Mengíbar, cantaora Aurora Vargas, guitarist Pedro Sierra and — with a video message — by bailaor and choreographer Rubén Olmo, current director of the Ballet Nacional de España, which will collaborate with the scenic direction. These are just a few of the many bailaores, cantaores and guitarists who will honor the bailaora, cantaora and teacher from Triana in this gala which, as Cristina Heeren summarized, will be a “celebration of the artistic life of a symbol of the art of Triana”.

Carmelilla Montoya was “speechless” as she tried to thank all her colleagues who will pay her a tribute on December 5th at Seville’s Fibes Auditorium. “My treasure is the people who love me”, she said very emotionally in the presentation of this gala at the Cristina Heeren Foundation, where she has been a teacher for the last two years. She stated that it will be “an incredible evening, an evening to remember”. This bailaora and cantaora from Triana has a clear picture about the design of this gala, because “it’s complicated to organize so many artists and I don’t want it to be monotonous”, she stated. To that effect, she’ll have by her side Rubén Olmo, director of the Ballet Nacional de España, who will help her in the scenic direction, as he indicated in his video message. Montoya explained that the show is structured in three acts: “First, the men will sing a round of tonás and martinetes, then the women will sing and in the section of baile, which will start with Rubén Olmo dancing Rafael Riqueni‘s Poema de amor with zapatilla, other bailaores and bailaoras will add their touch, for example Milagros Menjíbar will dance with her mantón, which she pioneered, or Eva Yerbabuena will dance copla… if she wants to”.

It was all confirmed right there. Eva Yerbabuena said that she felt, above all, thankful for “sitting here, because these women are my role models”. In name of her colleagues, the bailaora and choreographer from Granada said that “flamencos will always support each other, because it’s not possible to be a great artist without being a great person”. Guitarist Pedro Sierra agreed, stating that “flamencos care for each other, they’re good friends”. This feeling was echoed by Milagros Mengíbar, who recalled the two years they’ve been teaching in the flamenco academy of the Cristina Heeren Foundation, praising not just “her way of teaching, but her good heart”.

The academic director of the Foundation, Pepa Sánchez, who presented and moderated this event, highlighted the academic talent of the honored artist. “In our school we didn’t want Triana to be just an institutional mention, but we wanted to integrate the artists in our classrooms so that its flamenco legacy could be brought to life again”. Cristina Heeren, president of that collaborating entity, agreed, praising the teacher. “Carmelilla’s classes are special, I’ve seen she starting her lessons having their students sing and I think it’s a great way to make them understand the uniqueness of Triana in this art”. Finally, cantaora Aurora Vargas remembered that “we grew up together in the same neighborhood and we’ve worked together our whole lives. She added that “Carmelilla Montoya is quite an artist, a great bailaora and a terrific person”.

This tribute, with Jesús Molina as production coordinator, will feature many other artists. Over fifty bailaores, cantaores and guitarists will perform for free with this bailaora from Triana as she bids farewell to the stages. Among the bailaores, Cristina Hoyos, Antonio Canales, la Farruca, Pastora Galván, Javier Barón, Ana Morales, Rosario Toledo, Adela Campallo, and María Moreno will perform. Pansequito, José de la Tomasa, El Pele, Arcángel, Remedios Amaya, María Terremoto, Esperanza Fernández, La Susi, Alba Molina, El Extremeño, Segundo Falcón and La Tobala will be among the cantaores, and Rafael Riqueni, Paco Jarana, Niño de Pura, Manolo Franco, Paco Cortés and Miguel Ángel Cortés, among others, will be the guitarists. This tribute will also feature the comedy duo Los Morancos. Tickets for this gala, which also has the collaboration of Radiolé, are already on sale at Fibestickets.es.

Carmelilla Montoya, born in Seville in 1962, is an artist with roots in Triana, daughter of Carmen Montoya, niece of Antonia La Negra and Juan Montoya, and cousin of Lole Montoya. She started dancing when she was a little girl, as attested by the iconic TV series Rito y geografía del cante. Since she was 9 years old, she was part of the ensemble La Familia Montoya. When she was 15 years old, she was awarded the National Prize of Baile Flamenco by Jerez’s Cátedra de Flamencología.  She continued her career performing with artists such as Camarón, Antonio Canales and Paco de Lucía. She has also taken part in shows such as Fedra, together with Lola Greco and Amador Rojas, and La Farruca’s Gitanas. In 2012 she released her CD Homenaje, with the collaboration of Miguel Poveda, La Tana, Raimundo Amador, Remedios Amaya and Alba Molina, among others, showcasing her other artistic talent as cantaora, a talent which she has also explored since she was a little girl. She’s been part of the teaching staff at the Fundación Cristina Heeren de Arte Flamenco since 2017. 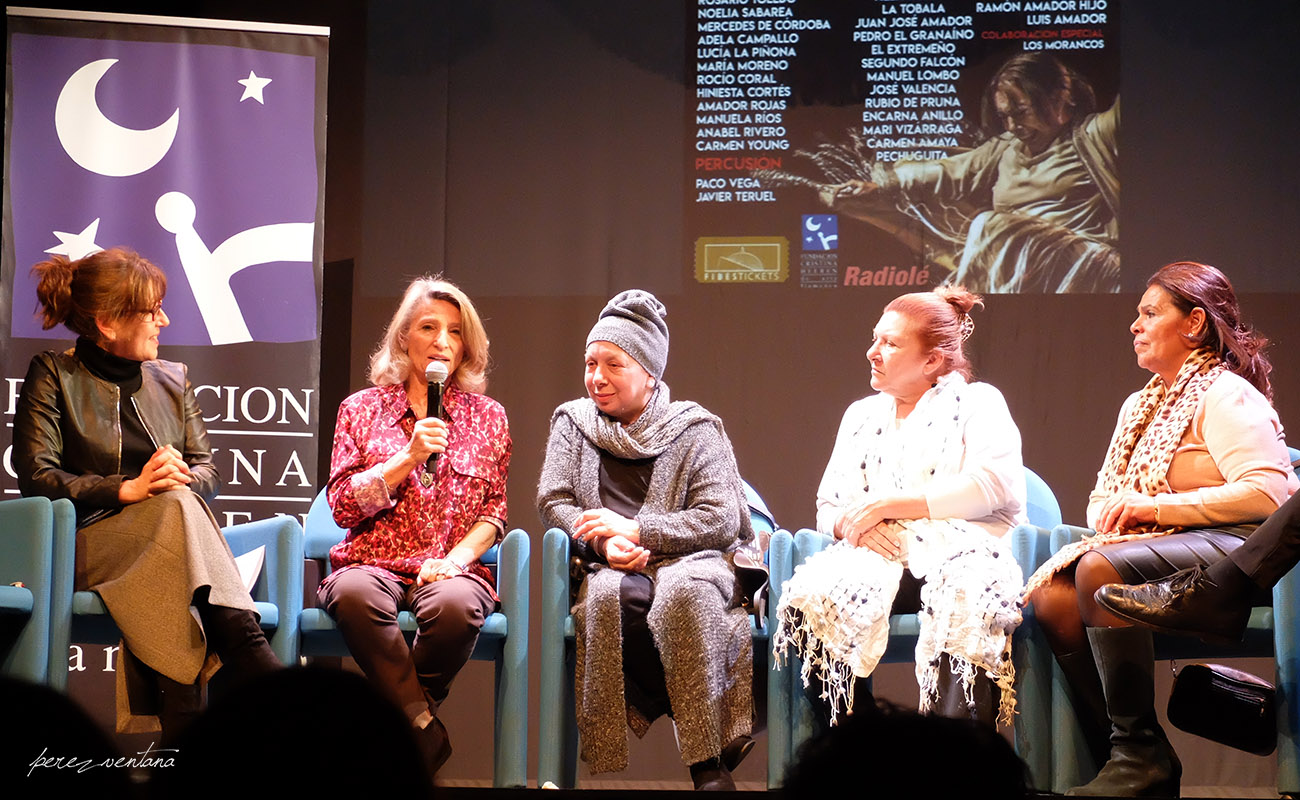 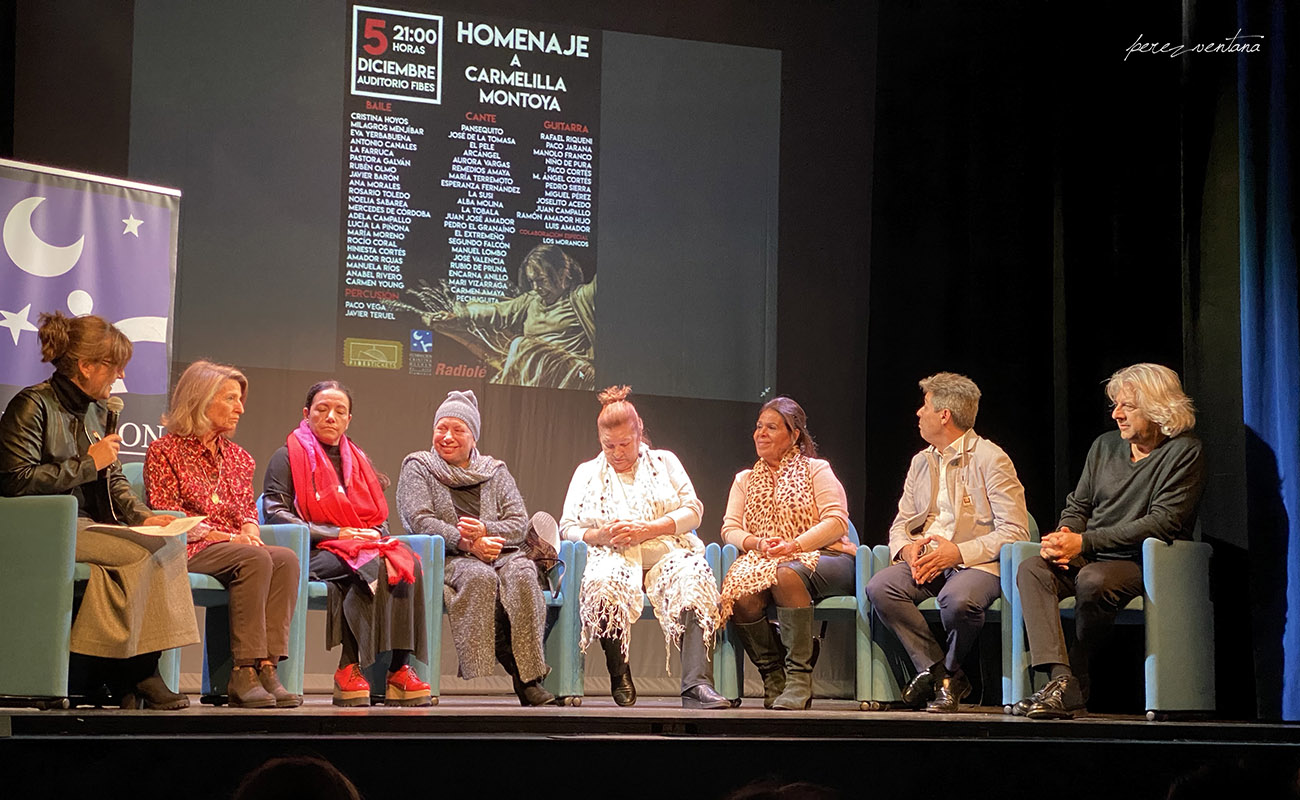 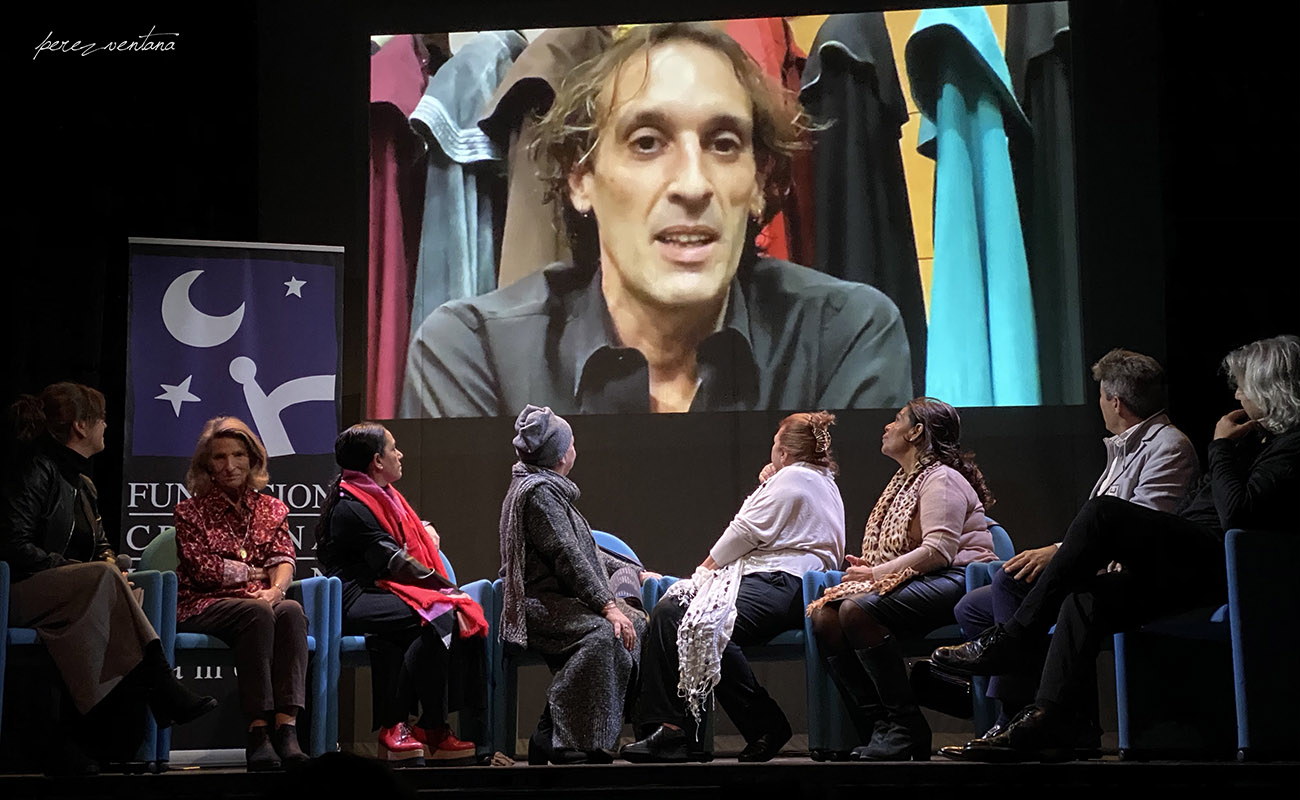 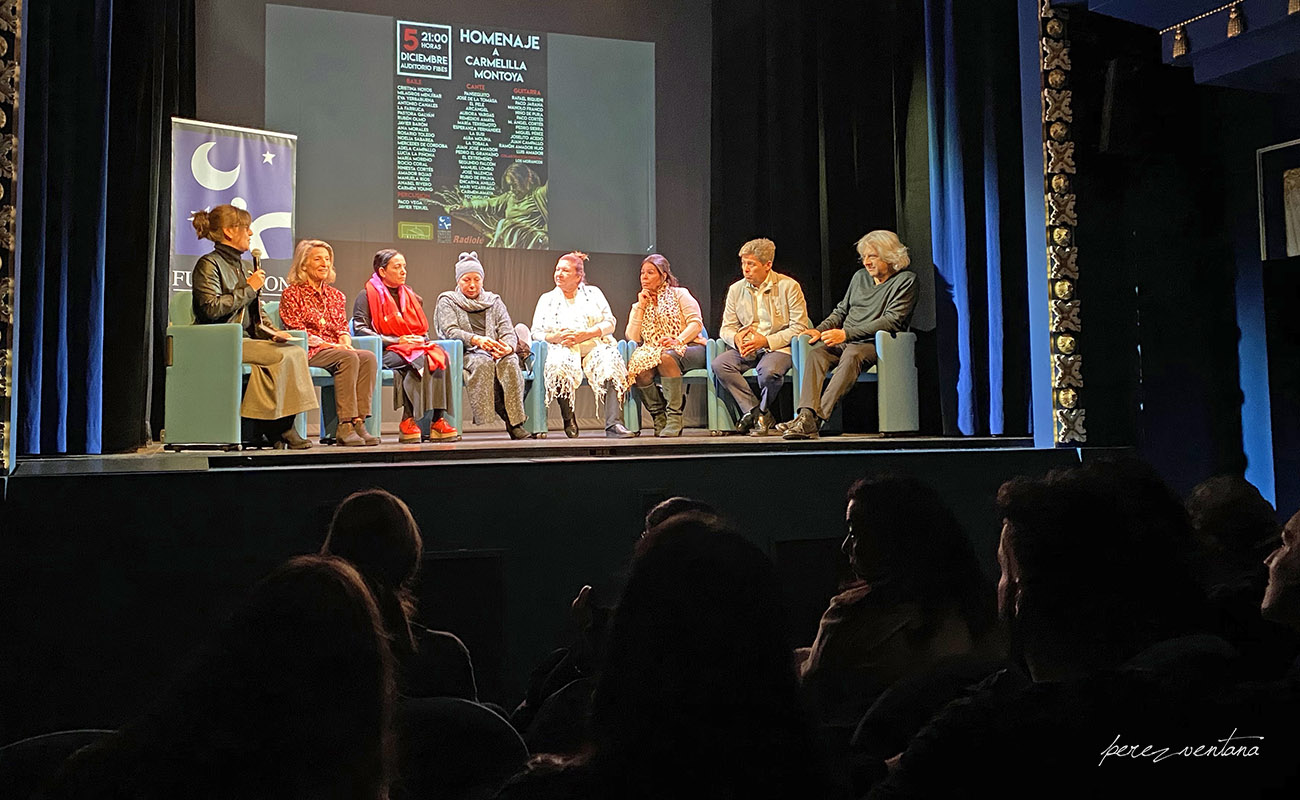