Paco Cepero, that man capable of accompanying cante with his guitar like few others in history, has just released 'Sueño Latino', his latest album so far. "Here there is Cepero for a while while the coconut and my hands work," he assured at a press conference while one of the themes of this new album in which "flamenco with Latin 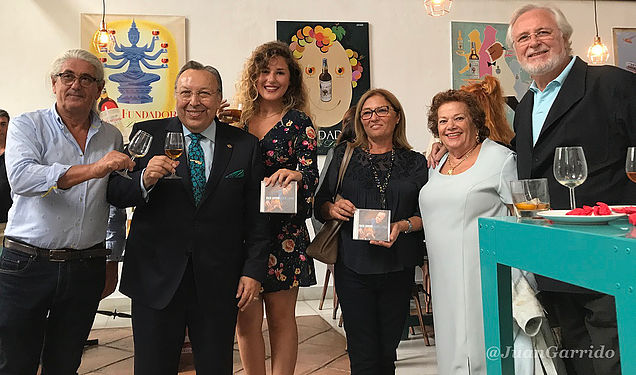 Paco Cepero, that man capable of accompanying cante with his guitar like few others in history, has just released ‘Sueño Latino’, his latest album so far. “Here there is Cepero for a while while the coconut and my hands work,” he assured at a press conference while one of the themes of this new album in which “flamenco with Latin music, like those of the round-trip cantes, “Cepero said. The setting chosen to present this musical work was the Fundador winery, and in the press room were, among others, artists such as Vicente Soto, Antonio Reyes, Rancapino Chico, Samuel Serrano, Luisa Muñoz, David Lagos, Melchora Ortega or the singer of copla Laura Gallego.

The event was attended by numerous colleagues in the press, headed by Rafael Navas, director of Diario de Jerez, who accompanied the teacher at the presentation table. There was also the director of marketing of the winery, Eugenia Herrera, and the writer and poet Enrique Montiel, who wanted to express through a spontaneous and natural semblance the feelings caused by this “priceless gift”.

Talking about Paco Cepero in artistic terms is not limited only to his role as a guitarist. Although it is true that its beginnings, back in the late 1990s, was in Jerez together with the artists who were living at the time of the parties and intimate gatherings, it soon took a gigantic step, in the year 62 begins to accompany the great Paquera de Jerez, who had been left without a guitarist and who decides to have a young Cepero, according to the guitar player “because – on his guitar – he wore the air of Jerez”, and since then he has not he has stopped playing his guitar to this day. He was born in Jerez in 1942, nephew of José Cepero, a long cantaor who made the fandangos his flag. He soon arrives at Tablao Los Canasteros by Manolo Caracol and starts playing the flamenco greats. Before I had done it in Jerez with Tío Borrico, Sordera, El Troncho, Manolito Jero, Earthquake, Tía Anica la Periñaca until La Perla, Lebrijano, Juan Villar, Turronero, passing through Camarón, Chiquetete, La Marelu, Pansequito or Aurora Vargas and La Macanita … Moreover, the first recorded images of José Monje Cruz ‘Camarón de la Isla’ are under the umbrella of Paco Cepero’s guitar.

Paco approaches the artistic profile of the Renaissance when he begins to create compositions for the great artists of our country, be they copla, flamenco or Spanish song. Who does not know the ‘Love, Love’ of Lolita, or ‘The cowardice’ of Chiquetete, or the magnificent disc of Rocío Jurado ‘Where are you love?’, Which produced the master Cepero? Marismeños, Bordón 4, Lebrijano, Isabel Pantoja, María Jiménez … are other names that have interpreted Cepero’s creations.

‘Sueño Latino’ is the sixth solo album by the maestro of the guitar after ‘Amuleto’ (1977), ‘De pura cepa’ (2000), ‘Corazón y Bordón’ (2004), ‘Abolengo’ (2007) and ‘Suite Gades’ (2012). In this work he thanks David Lagos for “allowing me to record it in his studio, I’ve felt at home”, as well as José Amosa “who always records and mixes perfectly, even what I get improvised, never escapes anything ” Among the themes that Paco wanted to highlight as special are ‘Onuba’ (some fandangos), ‘Para Chari’ (song dedicated to his wife) or ‘Alameda Vieja’ (some bulerías “very Cepero style”).