After the great success of the first edition of the Festival Flamenco Mediterráneo de Alicante, the organizers have wanted to keep alive what originally was an idea by a handful aficionados in the city. The commitment of Fundación Caja Mediterráneo to back a high-level programming featuring great contemporary artists, promoting once again compás in eastern Spain, is truly praiseworthy. While last year this festival featured 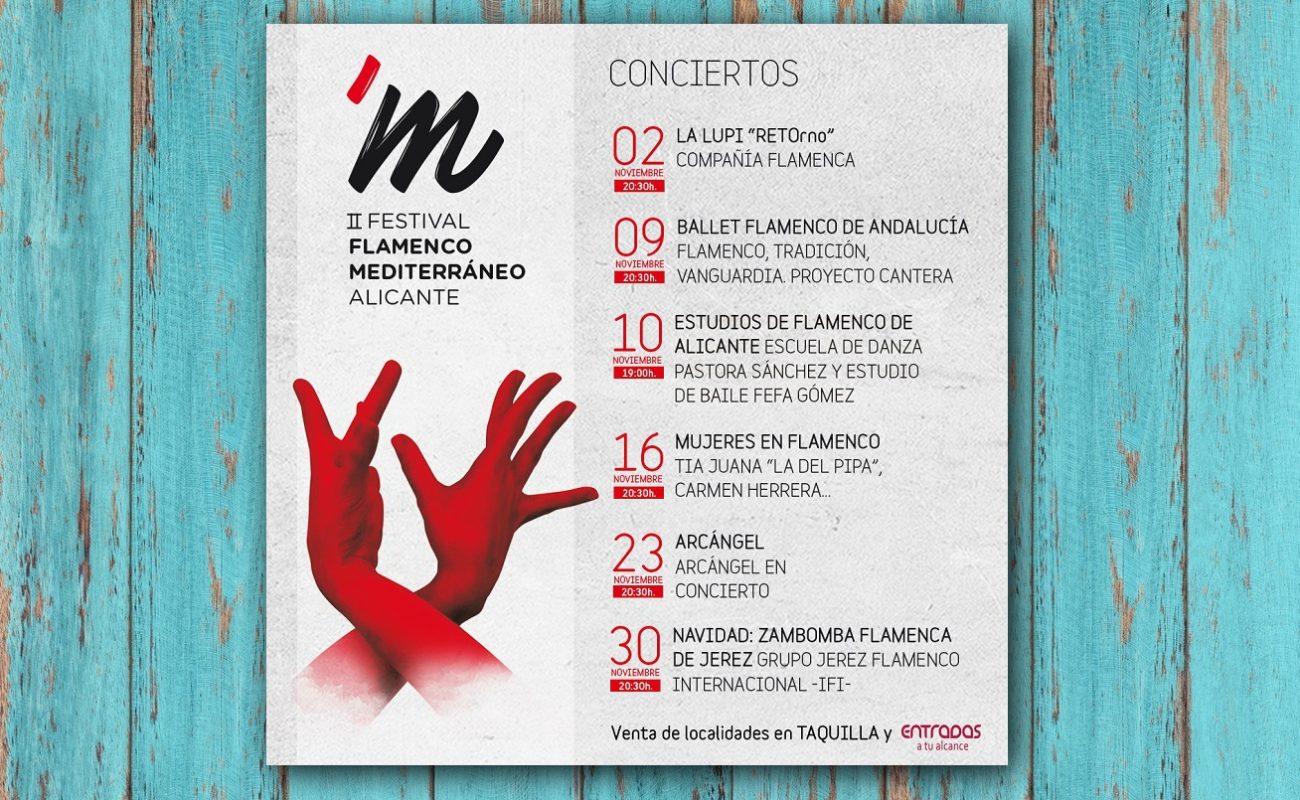 After the great success of the first edition of the Festival Flamenco Mediterráneo de Alicante, the organizers have wanted to keep alive what originally was an idea by a handful aficionados in the city. The commitment of Fundación Caja Mediterráneo to back a high-level programming featuring great contemporary artists, promoting once again compás in eastern Spain, is truly praiseworthy. While last year this festival featured names like the well-known guitarist Dani de Morón, as well as Jesús Guerrero, and the bailaores Jesús Carmona and Fernando Jiménez, among others, this year’s edition continues to bet on quality, above all.

This is a festival that not only features performances, but also has a great program of master classes, following the example of other leading festivals such as the one in Jerez, which is kept alive by students who come to learn different styles of baile, always keeping the rhythm with cante and baile. Besides, two renowned documentaries will be screened, featuring two iconic artists, La Paquera de Jerez and La Chana. The former will be screened on Monday, November 5, with the title “Por Oriente sale el sol: La Paquera de Jerez en Tokio”, by Fernando González Caballos, and the following Monday will feature one of the most charismatic bailaoras from Catalunya, Antonia Santiago Amador ‘La Chana’, directed by por Lucija Stojevic.

The first gala is scheduled for the evening of November 2, with La Lupi’s show “RETOrno”. The challenge (“reto”) is to put together many years of work, looking into the past, remembering the baile of the old days, the baile of the tenement yards and emulating them por tangos, evoking the mastery of good traditional flamenco with bata de cola and mantón, honoring the baile of sombrero cordobés, without forgetting her many years of work, and always maintaining the “less is more” mantra. The following day, La Lupi will give a course por tangos.

November 9 with be the turn of Ballet Flamenco de Andalucía which has been, through its 23 years, a quarry for great talent, producing artists who have later become renowned bailaores. From Israel Galván, Mercedes Ruiz or Juan José Jaén “El Junco”, among many others, this institutional company has been a good school where bailaores and bailaoras have the opportunity to learn from the great masters. This teaching approach has been reinforced in this new period of its history, as the project chosen for this stage, led by Rafael Estévez, has turned the Ballet Flamenco de Andalucía into a kind of artistic agora, where the dance troupe finds a place to express and develop its creative concerns. The following day, Saturday November 10, the stage will belong to the dance schools of Pastora Sánchez and Fefa Gómez, two of the most popular teachers in Alicante.

‘Mujeres en el Flamenco‘ is the name of the production that the group Jerez Flamenco Internacional will bring to Alicante the evening of November 16. Leading artists in women’s cante such as Tía Juana la del Pipa, Lela Soto, Gema ‘la Cantarota’ and Tomasa Peña will evoke, each in their own way, legendary artists of this genre such as La Paquera de Jerez, Perla de Cádiz and the sisters Fernanda and Bernarda de Utrera. In baile, Carmen Herrera will evoke bailaoras who have also made history, such as Matilde Coral and Angelita Gómez. Pepe del Morao, grandson of Manuel, will accompany all of them at the guitar, as his grandfather once did. The following day Carmen Herrera will offer a master class por tientos.

Arcángel, born in Huelva in 1977, has been a leading flamenco artist practically since he became a professional cantaor when he was 15 years old. This cantaor will be the protagonist on the evening of Friday, November 23. His echo and his concept of cante flamenco coexist in natural harmony with a deep knowledge and respect for the roots of arte jondo, having a boundless interest in finding new inroads in the development of flamenco art: it’s in this delicate and beautiful line (often mentioned but seldom heard or even sensed) that separates tradition and modernity where this cantaor from Huelva conceives his art. In the morning of the following day, Saturday November 24, the teaching will be done by Patricia Guerrero, bailaora from Granada, por alegrías.

Finally, closing the lineup on November 30, Jerez is back once again with its traditional zambomba, one of the most typical popular events in that city. Zambomba Jerezana: Around a bonfire, in a tenement’s yard, sharing the few things people have: sweets, wine… That’s the atmosphere of the authentic zambomba de Jerez, one of the most cherished traditions of that city in Cádiz province. The celebration of the birth of Baby Jesus (“Niño Dios”) is at the core of the festivities, and that’s the topic of the many verses and villancicos that echo in all corners as a symbol of the celebrations. For some time, Jerez has become an epicenter of Christmas musical culture, being a tourist attraction for thousands of people eager to witness first-hand that coexistence that still exists in its original form. Eva Rubichi, Coral de los Reyes, José Mijita, Ana de los Reyes, Joaquín ‘El Zambo’ and Domingo Rubichi will add compás to the Christmas spirit. The following day, Fernando Jiménez, also a member of the zambomba troupe, will offer a master class por bulerías, closing the festival.

Tickets are available at http://flamenco.cajamediterraneo.es/tiketing/ 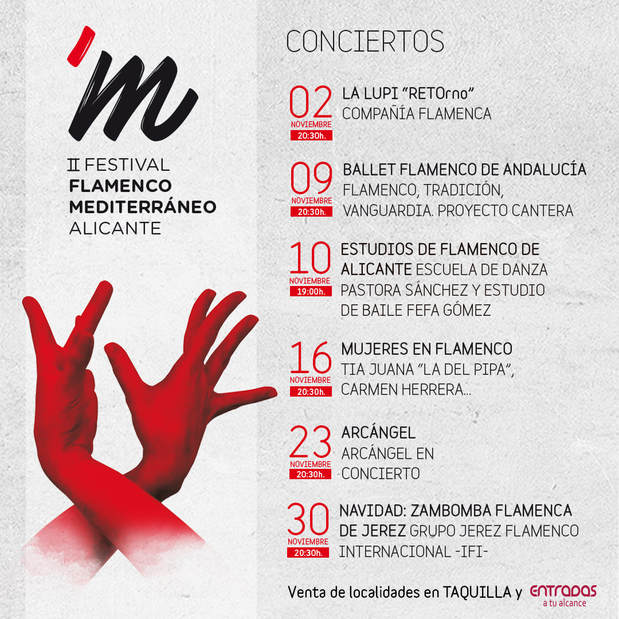 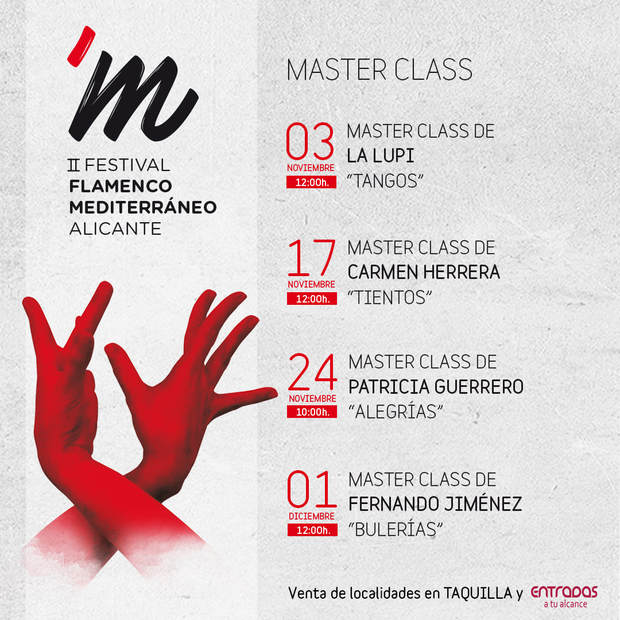 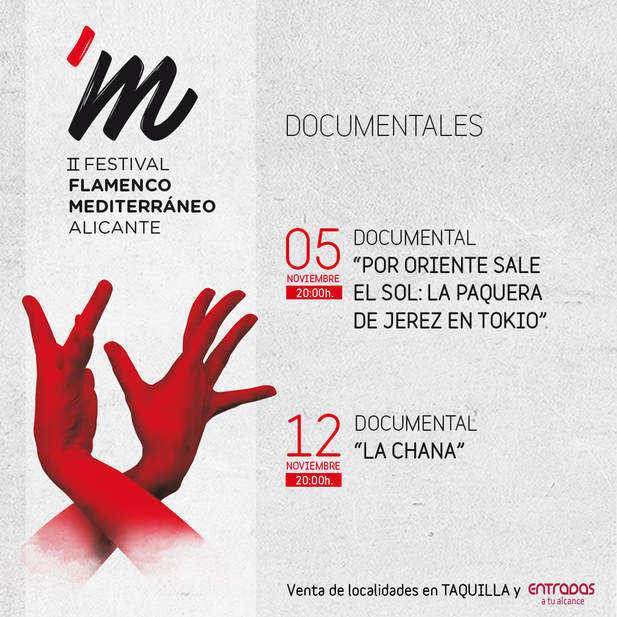