Last Wednesday I wrote an article about a young cantaor from La Línea, El Purili, and now I want to introduce David Rodríguez Romero, a 17-year-old from Arahal, in the province of Seville, whose skill as a guitarist has already been attested by great artists such as Manolo Sanlúcar or Rafael Riqueni. The vocation for music and flamenco in this kid is extraordinary, as well as 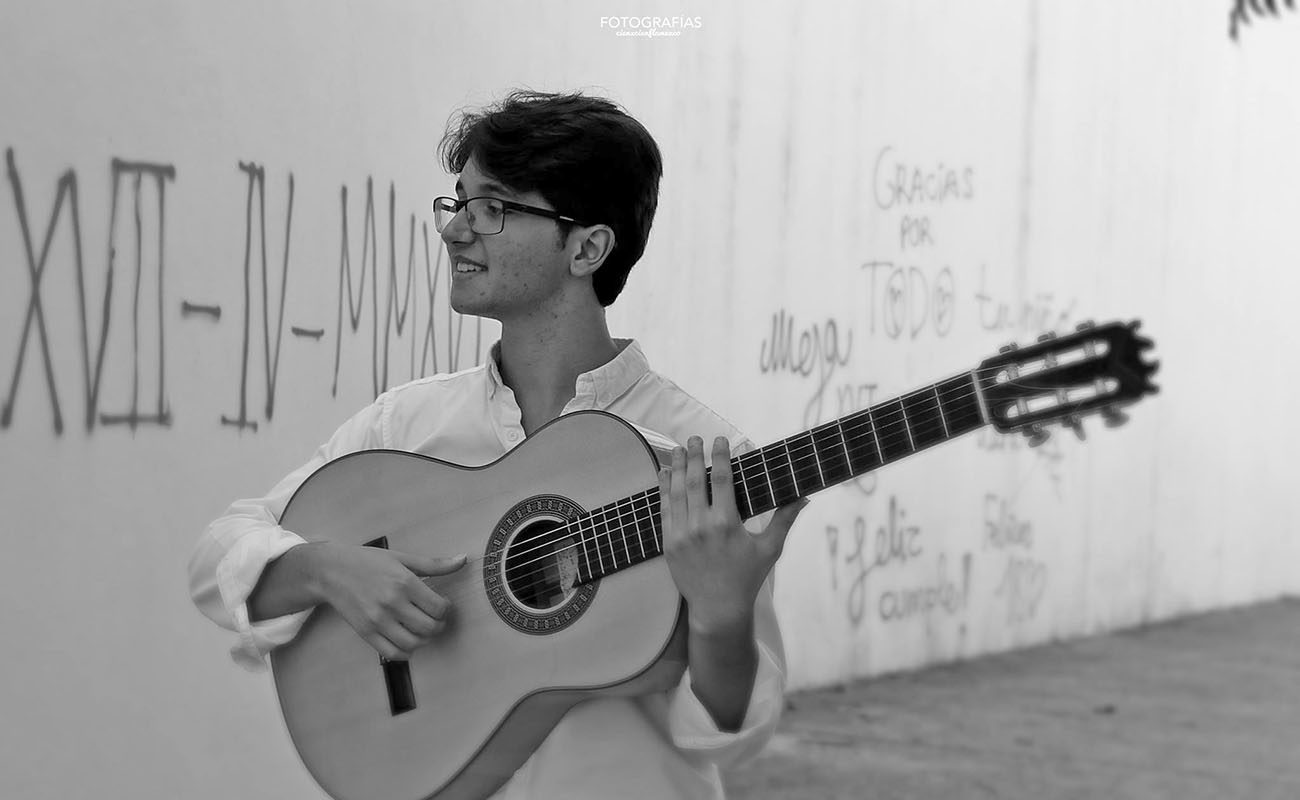 Last Wednesday I wrote an article about a young cantaor from La Línea, El Purili, and now I want to introduce David Rodríguez Romero, a 17-year-old from Arahal, in the province of Seville, whose skill as a guitarist has already been attested by great artists such as Manolo Sanlúcar or Rafael Riqueni. The vocation for music and flamenco in this kid is extraordinary, as well as his fondness for the great artists of guitar and cante. As he was born in my hometown, I’ve known him since he was a little child, and it was amazing to see how he, at 10 or 12 years old, could say things about flamenco guitar that older guitarists weren’t able to articulate. He often hanged out with the town’s good aficionados, particularly aficionados of cante, to experience the scene and soak in sensibilidad jonda.

Manolo Sanlúcar once told me that a young guitarist should have three qualities: a gift for music, afición1 and love for other arts. No one is born a musician, but some people are born with a special sensibility for music and art in general. One day, as a kid, we may listen to someone playing the guitar in a family gathering or on TV and we may realize that is precisely what we want to do: to play the guitar. Then, all we see are guitars everywhere, even in our dreams. That is what happened to this teenager from Arahal, who one day knew for sure that he wanted to live embracing a guitar for the rest of his life. That is what he does, he embraces and plays the guitar with a loving gentleness, making soft and deep music, loving his guitar above everything else. That is why he is meant to be a great guitarist. I could say he already is a great guitarist, but he’s still young and needs time.

I like him since he was a kid, because he plays with his soul. What does that mean, to play with our soul? It means to feel what we play, to be moved by our playing, and when that happens it’s easier to convey feeling. David is not a machine, he doesn’t eat his guitar, attacking the strings at breakneck speed or pounding the instrument’s box. He is a guitarist who possesses enormous gentleness, having a cadence that is soft and, above all, deep. It has always been a mystery to me how come the same guitar can sound differently when played by different guitarists with opposite styles. For example, Paco de Lucía and Manolo Sanlúcar or Diego de Morón and Manuel Parrilla. When David Rodríguez plays the guitar, he sounds like no other but himself, as he’s a kid who has an immense gentleness, who talks in a quiet, low voice, and is never loud. Is that personality? No doubt about it.

I was surprised by the fact that just three or four years ago, being just a kid, he was already playing his own compositions. The urge to compose his own musical pieces arose very early in him, and that’s something extraordinary. To be able to compose, it’s necessary to have life experience and to be able to analyse the surrounding reality. David had barely been out of Arahal when he already felt the need to express his own feelings with his guitar. Arahal is a big town, with over twenty thousand residents, surrounded by olive groves, by taverns where people sing and play the guitar and with an unquestionable flamenco tradition. The mother of Niña de los Peines, Pastora, was from Arahal, as so was her grandfather, Tomás El Calilo. The first Niño de Arahal, El Rubicano, from the days of the ópera flamenca, was from Arahal, as was the case with the last Niño de Arahal, Jaime Portillo Sánchez, both already deceased. David is aware of his town’s flamenco tradition and cherishes it, and that makes him a guitarist with sensibility who feels a boundless love for cante.

We don’t know how far he’ll get, because he’s still young and we’re well aware that many promising young artists end up giving up the guitar out of frustration or just because something else comes up in their lives. I believe that David Rodríguez will be a great guitarist, and I’m saying this not just because he’s from my hometown and I feel a great esteem for him on a personal level, as I do for his brother Marco (creator of the Cienxcienflamenco website) and for their parents as well, for sure. I say this because, besides his abilities, David possesses that treat that makes people achieve greatness in a given art: the will to be great. Afición, commitment, talent… In short, love for the guitar and for flamenco.

1 The word “afición” is understood as a passionate intertest about something, implying a will to know and understand, achieved by study and learning.