One of the artists of cante andaluz that I’ve always had an interest in has been Juan Breva, a cantaor and guitarist from Vélez-Málaga, whose 100th anniversary of his death should be commemorated this year, as he died on June 8, 1918. He was truly a great cantaor , and not just regarding his body (the poet García Lorca remarked that he had the body of 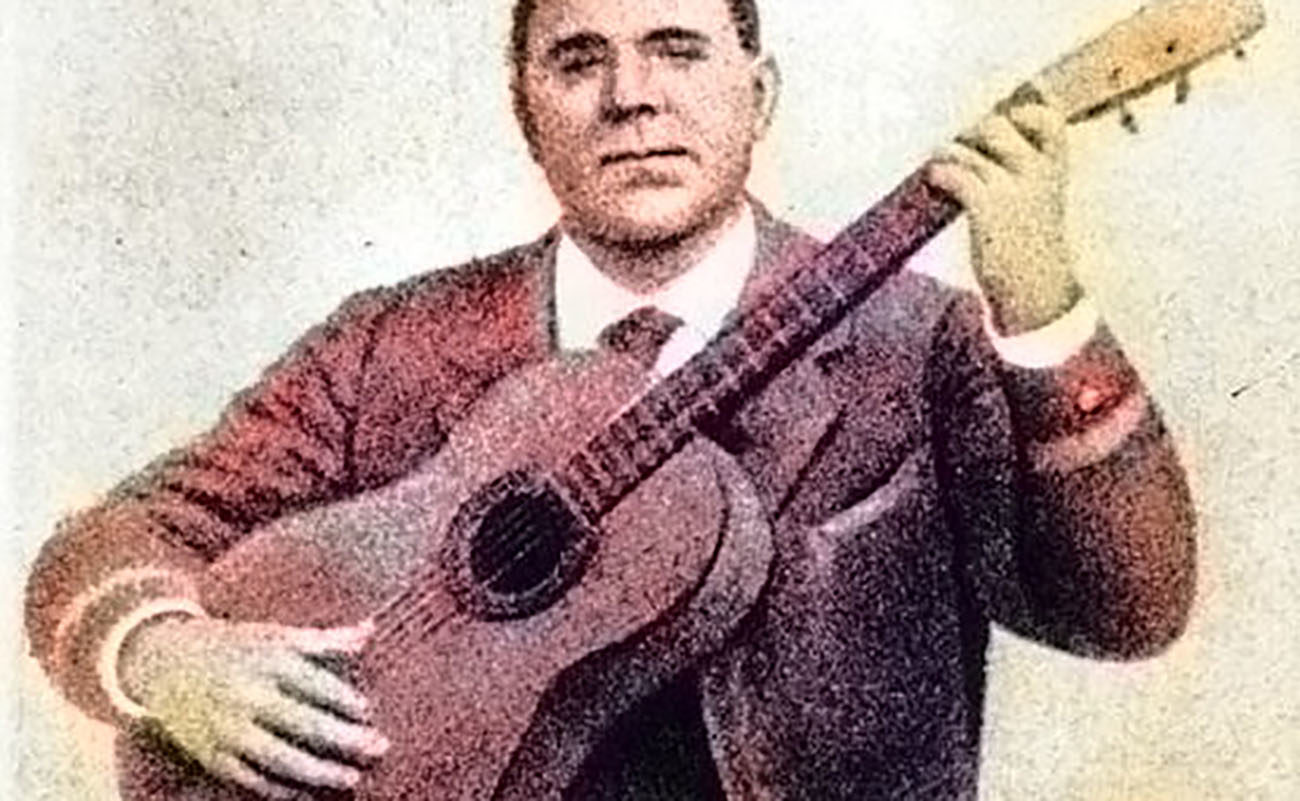 One of the artists of cante andaluz that I’ve always had an interest in has been Juan Breva, a cantaor and guitarist from Vélez-Málaga, whose 100th anniversary of his death should be commemorated this year, as he died on June 8, 1918. He was truly a great cantaor , and not just regarding his body (the poet García Lorca remarked that he had the body of a giant and the voice of a girl), but also regarding his style. He was one of the pioneers of cante jondo, having created and popularized several musical styles from Málaga’s cante. He was one of the first true professionals of this art, and he would routinely fill cafés and theaters to capacity in the Spanish capital, at a time when Silverio, Paco El Gandul and Canario de Álora were still alive. When he arrived in Madrid, bent on nationwide success, he created such an upheaval that the theater entrepreneurs would raffle opportunities to feature him, like it used to happen with the best Italian tenors. That big man from Málaga would accompany himself with the guitar and captivated kings and princesses, although he never lost touch with the common people.

We can’t properly define Juan Breva as cantaor according to the scarce discography he left behind, among other things because he was at least 65 years old when he was first recorded in 1910, so his singing prowess would naturally have dwindled by then. Despite of his relative old age and the fact that his health was very frail at the time, we can discern his incredible singing technique and the way he set his voice, which was truly amazing considering the times and his illness. Yet, the reason we should celebrate him on the 100th anniversary of his death is not just because the way he sang of because of the recordings he left behind, but because of what he represented and contributed at the time. Among other things, Antonio Ortega Escalona (his real name — he was born in Veléz-Málaga in 1844) opened the doors for other cantaor es and cantaor as, and he always looked after the artists from Málaga, as shown by his interest in providing opportunities for El Canario or La Trini, who were, together with Juan, the greatest flamenco artists in those days. .

Artists must be analyzed considering the times when they lived. Juan Breva was a flamenco cantaor , but he rubbed shoulders with artists from other genres and he contributed to popularize Málaga’s cante among actors, poets, tenors or politicians. No one from Málaga before him had achieved so much renown. After he became an established cantaor , Canario de Álora became his rival, as he was also performing in the Spanish capital in the 1880s, with the stage name Canario Malagueño. However, it was a short-lived rivalry, because when Álora had achieved success with his personal malagueña, he was stabbed to death by the father of Rubia de Málaga in 1885. Juan Breva then became the sole great master of Málaga’s cante, until his death.

We have to say that Juan Breva has never been forgotten in Málaga, on the contrary, he even has a peña flamenca named in his honor, which happens to be one of the best peñas in all of Spain, and is also a flamenco museum. I am sure that the 100th anniversary of the death of this artist will be celebrated at the Peña Juan Breva as the occasion merits. Málaga’s cante cannot be conceived without this great artist, and this peña understands its responsibility. It always did, and always will.

Thus, 2018 will be the year of Juan Breva, that cantaor from Vélez-Málaga who imitated the birds and conquered the world. Well, if not the whole world, at least Spain, a country which was starting to discover an art called flamenco.