The power of Rubito at Peña Mazaco 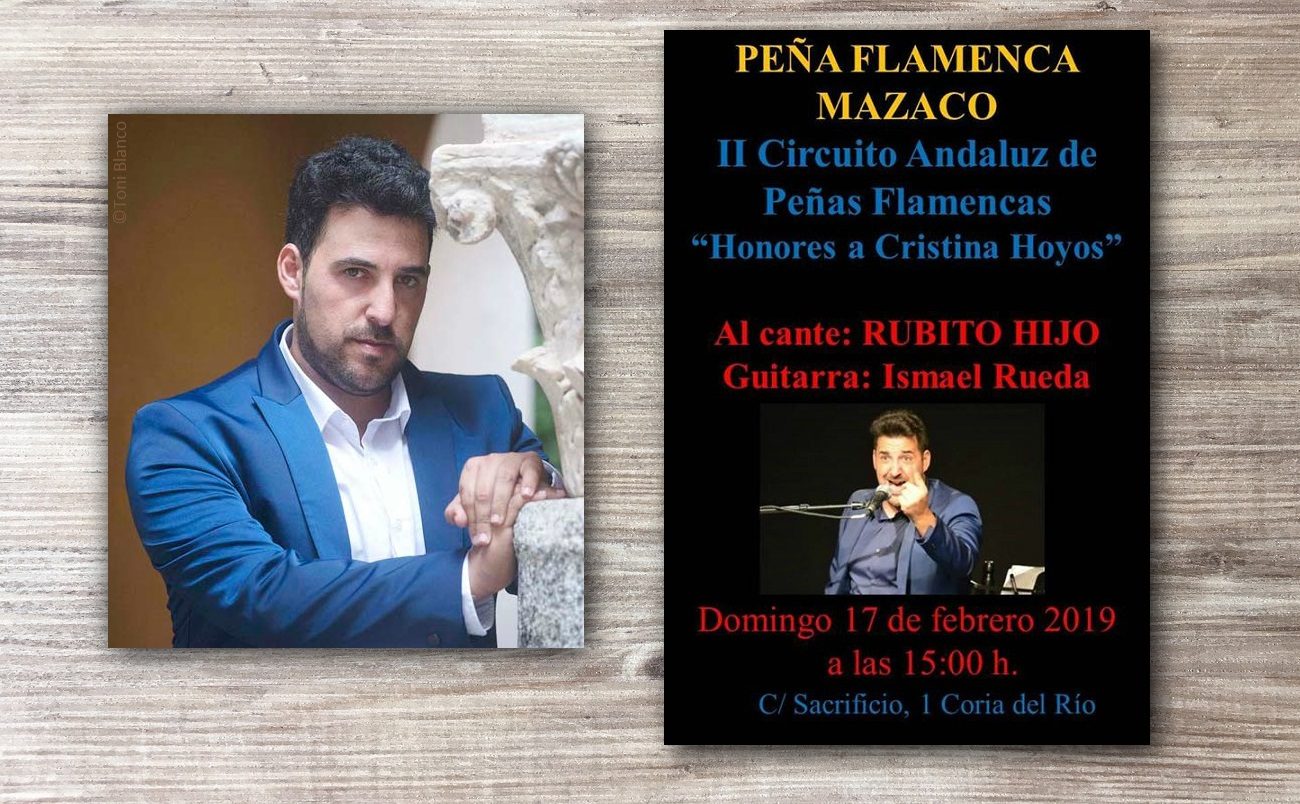 I no longer go to peñas as much as I did years or even decades ago, perhaps because I’m getting tired or because I have too many commitments. I now live near Peña Mazaco in Coria, and I will take advantage of this fortunate circumstance, because the best place to enjoy a good recital of cante is in a traditional peña, just like this one. Coria is a town that I really like, for reasons I believe I already explained in this blog, and yesterday there was a recital by the cantaor Rubito hijo, accompanied by the guitarist Ismael Rueda, who is from the province of Málaga. It was not a good time, 3 PM, but the fact is that the small venue was packed, and we had a good time listening to traditional cante.

Manuel González Cabrera, Rubito, from La Puebla de Cazalla (Seville province), is a singing heart. There are few cantaores so commited to authentic cante jondo like himself, without ever taking a break and having a spectacularly powerful voice. It’s true that cante it’s not just about commitment and voice, but I agree with Chacón: when he was asked which were the three qualities a good cantaor should have, and he replied “voice, voice and voice”. On the other hand, Caracol said that voice wasn’t as important, and that singers with soft voices had been able to make important contributions to cante. Opinions for all tastes.

Rubito is from the same town as Francisco Moreno Galván, Niña de la Puebla, José Menese, Miguel Vargas and Manuel Gerena. That is, a town with a long tradition in cante. He’s the son of a cantaor from Paradas, Rubito de Pará. Rubito hijo didn’t need to go anywhere to learn cante, then, because he had a teacher in his own house. Later he learned from everyone, perhaps like most cantaores, being a particular fan of Miguel Vargas, Menese and Antonio Mairena, without forgetting another cantaor who is almost like a god to him, Paco Toronjo.

Rubito gave a long recital, with very good details in soleares de Alcalá and soleares de Triana, alegrías, tientos-tangos, seguiriyas granaínas and fandangos. Yet, he started with particularly powerful tonás, which is an unusual way to start a recital, because this is really hard on the voice. There are not many cantaores left who are so committed and who sing so fiercely.

I also liked the guitarist, Ismael Rueda, because he refrained from showing off and was always at the service of the cantaor, having a clean technique and a bright sound. The public gave them a standing ovation, because besides performing several good cantes, they were brave to do it at three in the afternoon, just after lunch, when a sleepy laziness sets in. These two great professionals were able to enliven us.

This recital, by the way, was part of a circuit of the Federación de Entidades Flamencas de Sevilla, dedicated to the maestra Cristina Hoyos. The peñas flamencas, dear readers, are still essential.