Who was Concha La Peñaranda?

I felt quite sad when I heard about the death of the great researcher from Murcia, José Gelardo, as he was a good friend whom I admired for many years. Right away, I thought about something pending that we wanted to find out: whether a cantaora murdered in Valencia in 1889, Concepción Rodríguez y Calvo, was the same person as La Peñaranda. There 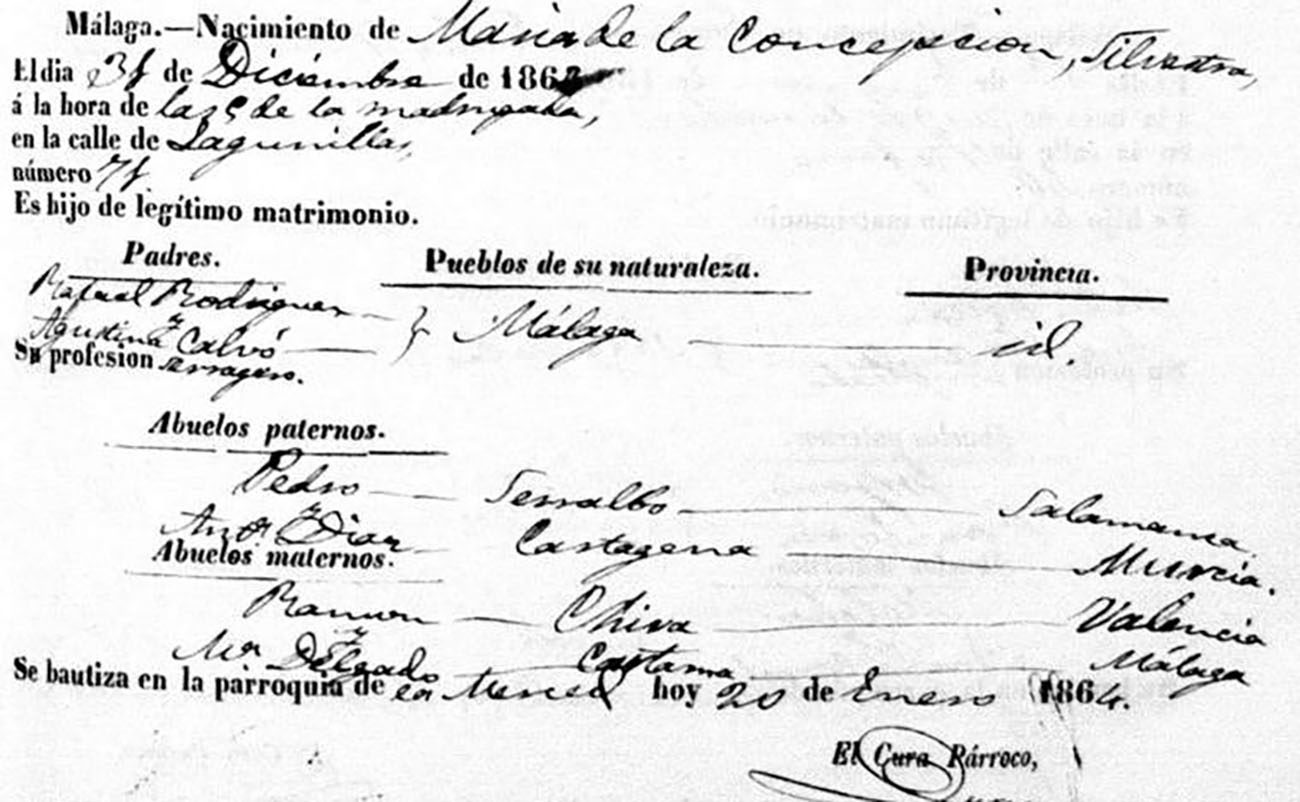 I felt quite sad when I heard about the death of the great researcher from Murcia, José Gelardo, as he was a good friend whom I admired for many years. Right away, I thought about something pending that we wanted to find out: whether a cantaora murdered in Valencia in 1889, Concepción Rodríguez y Calvo, was the same person as La Peñaranda. There is no question that the woman murdered in Valencia was a cantaora. Whether, as Gelardo claimed, she was La Peñaranda, the famous cantaora who achieved great success performing at Café Burrero, is less likely. I discussed this matter with him and he asked me to forward any information I was able to gather about this, but I put this project on hold, among other things because it never crossed my mind that my good friend would die so soon.

The only poster showing “Concepción Peñaranda (a) La Cartagenera”, just like that, was published in my book El Cartel maldito about the life and death of Juan Reyes Osuna El Canario. When Gelardo saw that poster, he called me and told me he had started to doubt whether the cantaora murdered in Valencia was in fact La Peñaranda, because in that poster this artist shows up as “Concepción Peñaranda”, that is Peñaranda as her surname, not as a stage name (which shows up as La Cartagenera instead). Interestingly, whoever made that historic poster didn’t make any mistakes with any of the other artists featured, and I wonder why they would have made a mistake precisely with this artist.

It’s clear that the actual name of La Peñaranda was “Concepción Peñaranda” and not “Concepción Rodríguez”, and that the latter, murdered in Valencia, was a different artist. Fernando el de Triana wrote about La Peñaranda in his book Arte y artistas Flamencos (Madrid, 1935), and he referred to her as La Cartagenera, as it’s written in that poster. If the famous La Peñaranda had been murdered, wouldn’t Fernando have told us about it, like he did with El Canario? He would have certainly done so, because this writer from Triana had attended her performances, and according to what he wrote about her, it’s obvious that he admired her as an artist. Likewise, Núñez del Prado wrote about La Peñaranda in his book Cantaores andaluces (1904), and it’s noteworthy that he didn’t say anything about her tragic death, considering how prone he was to lurid details.

It’s true that La Peñaranda vanished from the historical record in the 1880s, but this also happened with many cantaoras and cantaores. José Gelardo was unable to find in Málaga the birth certificate of Concepción Rodríguez y Calvo, the unfortunate cantaora murdered in Valencia. I managed to find it, and this is the main information that appears in the document:

I think it would be very odd if Concepción Rodríguez, from Málaga, was La Peñaranda, because why would she get “Peñaranda” as a stage name, if that surname doesn’t show up as any of her parents’ or grandparents’ surnames? Thus, like I told José Gelardo, I’m absolutely certain that the cantaora murdered in Valencia was Concha1 La Cantaora, who apparently was the sister of Niño de San Roque. The real, authentic La Peñarandawas Concepción Peñaranda, the one who shows up in the 1885 poster, alongside El Canario de Álora, El Canario Chico, La Serrana, Antonio el Pintor, Lamparilla and La Carbonera, among other famous artists.

I promise to shed light soon on this mystery as a tribute to my dear friend José Gelardo, who wrote about this celebrated artist in 2007, in his great book about El Rojo el Alpargatero. I don’t mean to call him out, less so after his death, but rather to fulfil my promise of sorting out a matter he lost a lot of sleep over.

1 Translation note: “Concha” is a common Spanish nickname for “Concepción” 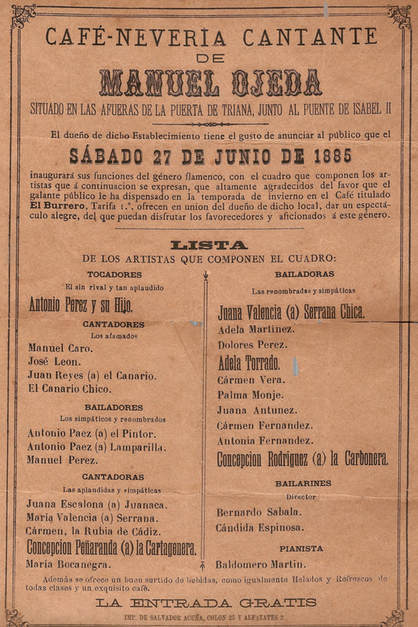