If in Paradas they decided to acknowledge the career and mastery of Manuel Moreno Maya ‘El Pele’, it was for a good reason, because Paradas is not given to nonsense. 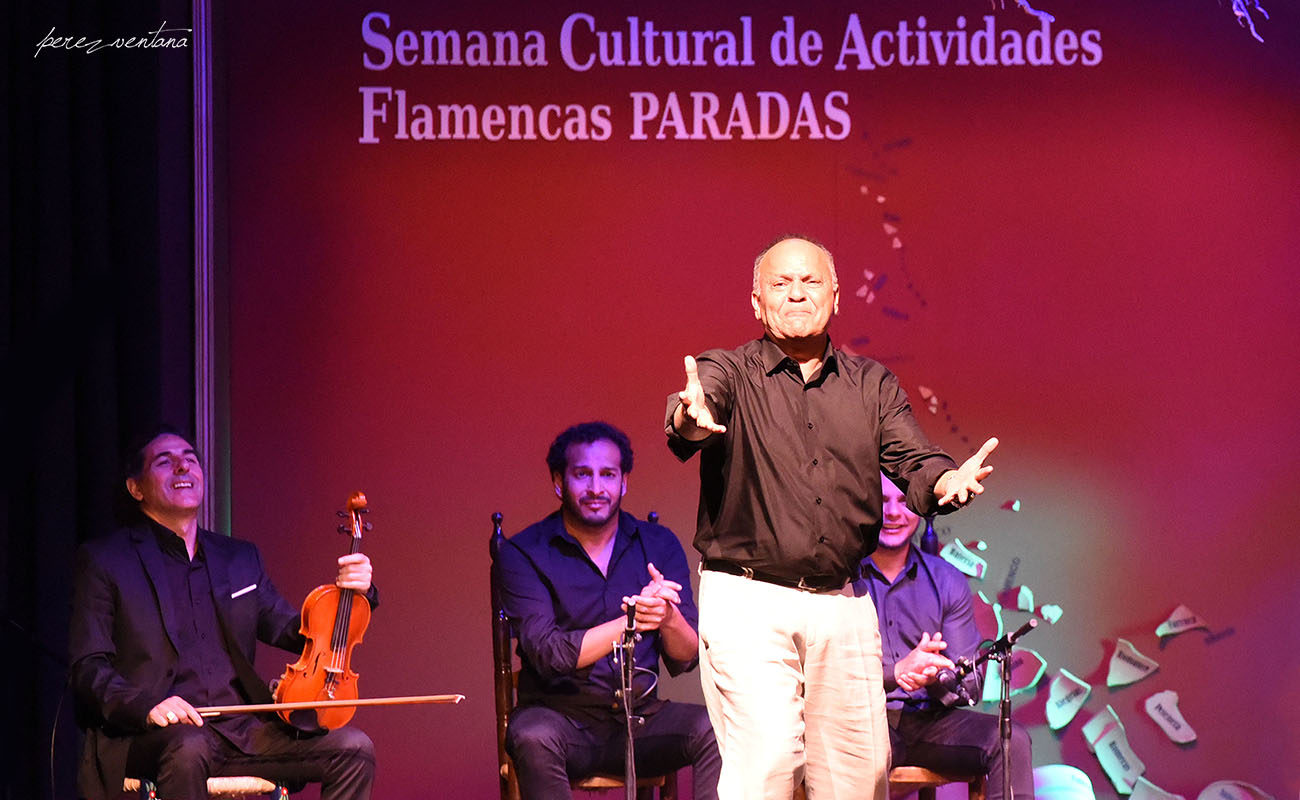 I have hundreds of reasons to appreciate El Pele and none to question this appreciation I’ve had for, let’s see, almost half my life. I’ve known him for decades, and I’ve experienced some moments with him that nothing and no one would make me forget. In Seville, in Andalusia and also beyond Spain. I don’t remember exactly when I first listened to him singing, but I recall it was a wonderful thing. Antonio Montoya probably was involved, as it happened when I met so many other artists, Vicente Amigo among them.

I’m not sure if I’ll regret saying this, because I’m getting a lot of heat lately, but Montoya is the agent I have most admired, always, perhaps because he’s the one I’ve known better and the one I’ve dealt with the most. Thus, I could write a literary essay about him, about his passion, talent and courage as aficionado, independently from his work as manager or agent. In fact, it’s in great measure due to him that we’re all gathered here to honor this great cantaor from Córdoba. Thus, Mr. Montoya, my respects, and welcome.

Critics and flamencologists often have a hard time separating the cantaor or cantaora from the person. I also say cantaora because these days we cannot afford to omit women, with the topic of feminism and male chauvinism in flamenco so popular nowadays, sadly. I would love to be able to separate the cantaor El Pele from the citizen from Córdoba Manuel Moreno Maya, but that would be impossible because this man sings in complete harmony and coherence with the human being he is. His voice and his style couldn’t be found in cantaores such as, for example, Calixto Sánchez and Miguel Poveda, who have other very commendable qualities. I cannot imagine them having the voice and style of the artist we’re honoring today.

Could you imagine Manolo Caracol, with his face, features and Gypsy personality, having the voice of Angelillo? Or that singer from Vallecas having Caracol’s voice? It’s also impossible to imagine Antonio Mairena with his huge Gypsy king-like presence, moving his chin like Niño de Marchena. Or Paquera de Jerez saying, like Rocío Márquez, that she was inspired by Rubens‘s paintings and not by the tenements in the Santiago neighborhood or by a stew pot on a wooden table. That’s the situation of cante jondo these days, full of nonsense.

We have not written much about this, and it would allow us to better understand the artists. I mean, separating the artist from the person. Yet, in the case of EL Pele, that would not be advisable because he’s a fun, spontaneous, fresh and very affectionate human being. He also has his peculiar sense of humor, but that’s something which is part of every flamenco, and when we know how to understand it, it’s a true source of inspiration.

I’ve always said that the most important thing in arte flamenco are the artists, well above flamencologists, critics, agents or members of peñas. It’s the artists who create or interpret, the ones who puts the passion, duende and pellizco. The ones who move us and give us goosebumps. When I say “artists”, I don’t mean copyists who imitate their maestros, but cantaores or cantaoras who contribute new things and have a unique style. We live in an age of great copyists and imitators.

How often do we have the opportunity to listen to a new, fresh, unique voice with its own personality? Yet, flamenco critics in general often become fans of those imitators, something that I’ve seen in my forty years in this profession. Critics cannot be fans of any artist. And if they are, it’s something that shouldn’t come up in their reviews. Our role is not to get along with the artists, but to analyse what they do, with all its consequences. It’s not that we should antagonize the artists, but we cannot be the cheerleaders of our favourite artists, either.

How often does a cantaor with the voice of El Pele comes out? Some would say, talking about imitators, that this cantaor from Córdoba is a copyist of Manolo Caracol, something that simply is not true. A copyist was, to name just one, the late Pepe Collantes de Terán, from Dos Hermanas. El Pele emulates Caracol with art, but he’s not a copyist, because a copyist follows the score, and tonight’s protagonist doesn’t follow any score because he’s an anarchic cantaor, although he follows an order, his own, which he imposes upon himself.

Anarchic means disorderly, yet El Pele has such a control over his voice, rhythm and compás that he can’t possibly be defined as disorderly. That is, he’s anarchic but has a lot of control over what he does, due to his knowledge about cante in general. I’ve listened to him sing superbly like Juan Talega, without imitating him, but just emulating his mettle and his essence. And I’ve also listened to El Pele sing a malagueña de La Trini with the finesse of Bernardo el de los Lobitos and the depth of Manolo Caracol.

There has never been a profusion of brilliant cantaores, although there has been lots of good cantaores, for sure. There has not been as many true geniuses as recorded by flamenco historians, but the few that have existed have defined the art of cante jondo. Chacón, Niña de los Peines, Manuel Torres, Marchena, Caracol, Morente and Camarón are some of the geniuses who have left an indelible imprint in flamenco. They filled essential periods of our art and left us works which have influenced several generations.

This artist from Córdoba is the favorite of most cantaores of the generation that came after his own, from Arcángel to Estrella Morente and Miguel Poveda. There have been cases like that in flamenco history, but not that many. Artists who have inspired other artists, such as, to name just a few, El Chaqueta, Miguel el Rubio, Antonio el de la Calzá, El Chino or Pele himself. I remember, for example, the admiration that Camarón de la Isla and Enrique Morente felt for him.

El Pele is a cantaor from Córdoba who is much loved in Seville, where he performs several times through the year, if not in the Bienal then in its summer festivals or in the peñas flamencas of the province. He has had memorable performances in our city, such as that one at the Reales Alcázares, in the Bienal, when he sang por soleá for Manuela Carrasco at Patio de la Montería.  The Giraldillo is still dazed with that performance, which earned him even more fans in the capital of Andalusia.

Although it was in the 1980s when El Pele shot to fame in cante, after he released his album La fuente de lo jondo in 1986, he’s been a cantaor since he was a child. He was born with the gift, without a doubt, but it was not easy for him to achieve success in cante. It’s true that when he attempted to stand out there was already a constellation of stars, such as Camarón and Morente, mentioned above, besides Fosforito — also from Córdoba —, Lebrijano, José Menese or Turronero. It wasn’t easy to be noticed, just like happened to Antonio Mairena in the 1930s. Yet, when that album was released, with Vicente Amigo on the guitar, which was a brilliant move, El Pele started performing everywhere, also because his voice was in its prime.

El Pele will be honored today at the Semana Flamenca de Paradas, which is taking place between March 17th and March 23rd, with the participation of renowned speakers and artists. Considering the importance of this flamenco week, the cantaor is feeling like a kid in a candy store and will perform in the closing act with the cantaora from Seville Remedios Amaya. Quite a treat for those who want to come this day to La Comarcal to honor an artist who is enjoying in his lifetime what it means to be loved and admired all over the world. El Pele gives it all when he’s on a stage, but also gets much in return, because he’s idolized by young artists and aficionados, and truly beloved by all who love an art which this artist from Córdoba is giving his life for.

El Pele says that today’s event is not a tribute, but a recognition. It’s all the same, dear maestro. This tribute is not for you to retire and stay at home and never sing again. It’s a way, the best way, to acknowledge your mastery, your career, your mettle as brilliant cantaor who has always given it all. You are not the typical great cantaor who avoids responsibilities or hides behind his brilliance, but you grab cante by the horns every time you sing, without lowering the tone of the guitar to make it easier. This tribute is not a recognition of brilliant pellizcos and inspired moments, but of many decades of commitment to an art which, without you, would be quite boring, frankly, because you’re not a inflexible cantaor, but an artist of cante. If here in Paradas they decided to acknowledge your career and mastery, it was for a good reason, because Paradas is not given to nonsense.

Thus, congratulations, and I hope this is not the last tribute in your honor, but that many others will follow while you’re still alive and strong enough to enjoy it in person, like tonight.