I’m so sorry, Manuel! I hope you’re able to get something worthwhile from that recording. But don’t quote the dog in your book. He’s a big fat liar! 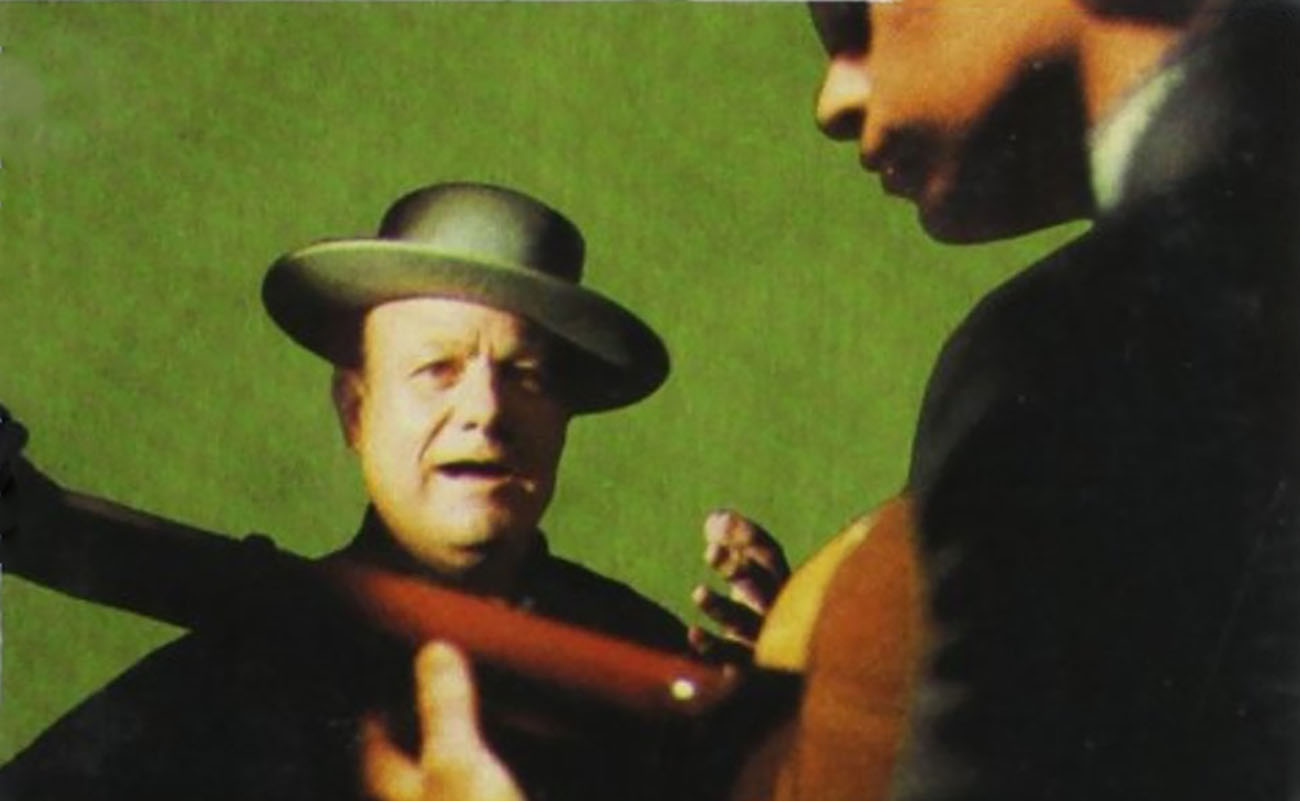 Carlos Saura, the film-maker from Aragón, sent two agents to the academy of Antonio El Farruco to convince him to dance por sevillanas with the other two members of Los Bolecos, Matilde Coral and her husband, Rafael El Negro, for the movie “Sevillanas”, which ended up being a great success. The agents offered him good money, but the genius of baile not only rejected their offer, but told them:

-Tell Carlos Saura that if one day he wants me to dance por soleá, I’ll do it for free, but I’m not a dancer of sevillanas.

His late son-in-law, El Moreno, once told me that in those days Farruco was dirt-poor. Such was Antonio Montoya Flores, “El Farruco”.

About thirty years ago, the newspaper I worked for assigned me to interview Chano Lobato, and we agreed to meet at his house, located next to the Betis stadium. It was in the morning and he offered me a shot of moonshine. His wife wasn’t home and he was unable to find the shot glass, so he took a big 20-ounce glass that was meant for decoration in his home bar and filled half of it, perhaps trying not to look cheap. As we chatted, I sipped the moonshine, and eventually I finished it all. When his wife, La Chana, arrived and saw the huge glass Chano had used, she was furious:

-Chano! What’s with the huge glass you gave this kid?!

-Well, he drank it all, can you believe it?

As I was sitting, I didn’t notice how tipsy I was, but as soon as I stood up it was like if the whole world started spinning. Chano suggested that I laid down for a bit until I felt better, but I told him that it was best if I took some fresh air outside, on the street. Just as I stepped out of the house on Reina Merceded avenue, I saw a bench and I laid down there. I woke up at 3 PM, and my tape recorder was gone, stolen.

One morning I interviewed Antonio Pérez Guerrero El Sevillano at his flat on Doctor Fedriani street in Seville, for my book about El Carbonerillo. It was a hot day and we went out to his balcony. As soon as I turned on the tape recorder a dog on the neighbor’s balcony started barking. It was a Pyrenean Mastiff, if I remember well, who according to Sevillano barked in the style of the cantaor Centeno. It was almost impossible to talk, and we had to stop the interview several times. On top of it, Sevillano’s wife would vainly attempt to quiet the dog down by yelling at it. Sevillano had a very sharp wit and as I was leaving he told me:

-I’m so sorry, Manuel! I hope you’re able to get something worthwhile from that recording. But don’t quote the dog in your book. He’s a big fat liar!

One evening, Chocolate was singing at the Peña El Chozas, and the neighborhood’s baker, a friend of him, sat on first row. As Chocolate sang, the baker would not stop giving advise:

-Antonio, sing that verse a bit tighter, like Tomás used to do…

Chocolate would just glance at him, flustered.

-Antonio, focus on the guitar, you’re getting off-beat…

Chocolate was getting pale, tired of the baker’s running advise, and when he finished singing one of the palos he was performing, he burst:

-What the heck is wrong with you?! Do I ever tell you how to make donuts?!

One day, when Juan Mojama was recording with Ramón Montoya (Gramófono, 1929), that cantaor from Jerez showed up wearing a fancy trench coat, where Ramón noticed a stain:

-Juanito, do you have anything in the pocket of your trench coat? I can’t help noticing a very unsightly stain.

-Yes, Don Ramón, I have two pieces of herring to clear up my voice. I would prefer ham but, being a singer, I can’t afford such luxuries.

-So just go outside, eat the herrings and come back after three hours, otherwise these records will stink of rotten fish just like you do.

Indeed, Juan Valderrama told me that Ramón Montoya was extremely clean and tidy, and it would greatly bother him to see anyone disheveled. And yet, Juan Mojama used to dress very elegantly.