The Chimeras of Ezequiel Benítez

Ezequiel had a good time recording it and it shows right away, from his first cante. Let’s hope that this work helps him to achieve greater recognition and a place in the best festivals. Let’s hope this becomes a reality, and not a chimera. He has earned it. 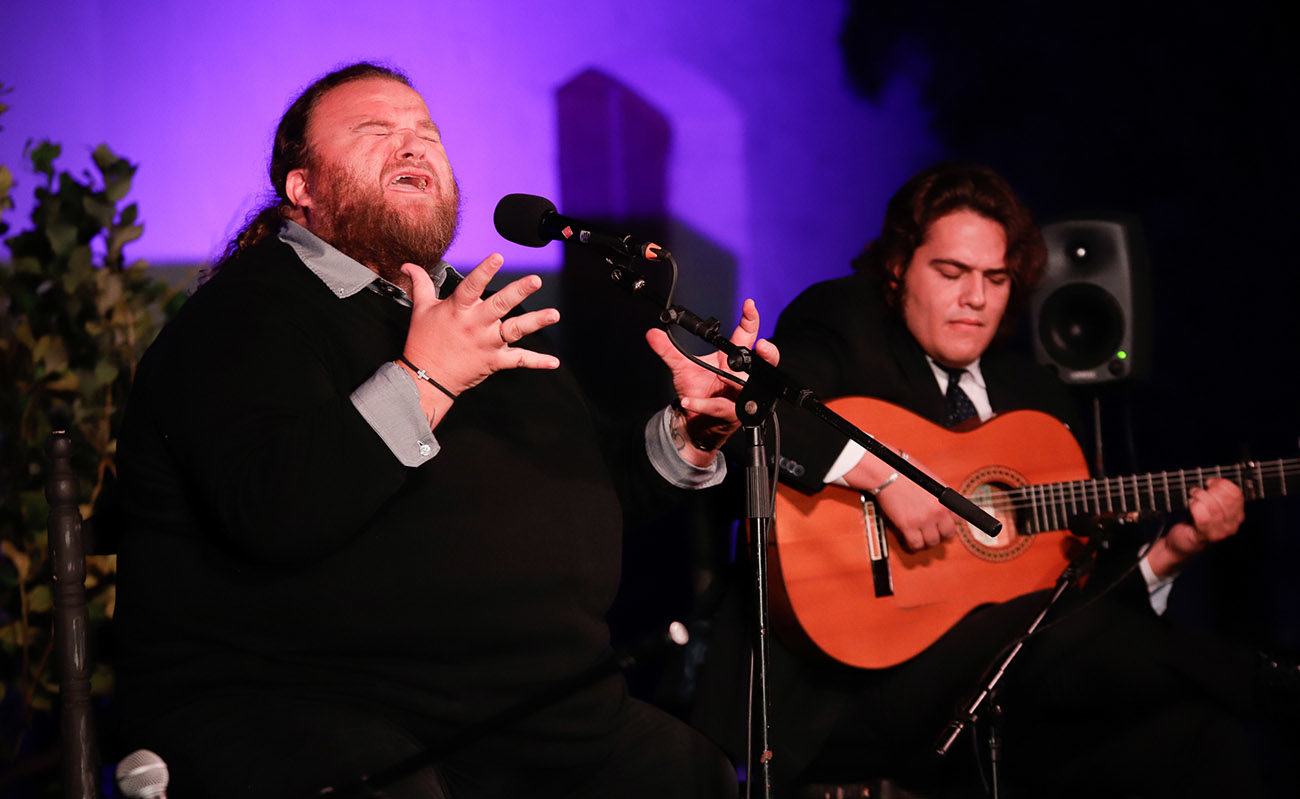 I don’t think that in all of Jerez there is one cantaor with such vocation as Ezequiel Benítez, who is the son of a great aficionado and flamenco connoisseur, Alfredo Benítez. Besides being a great cantaor, Ezequiel is, like his father, a great aficionado whose love for cante borders on madness. When I first met him he was just a teenager and I was amazed precisely at this: his love of the old echoes, of the cantes of the countryside, of the truly jondo. He seemed to be from another era, from the days when Tomás Pavón, Juan Mojama, el Niño Gloria and El Carbonerillo made a living in the tabancos and would only talk about cante and women, in Sevillan places such as La Europa or Las Siete Puertas, at the Alameda de Hércules. Ezequiel is also a proud jerezano, always in love with Jerez’ most significant flamenco neighborhoods, such as Santiago and San Miguel.

Sometimes I went for walks with him in those neighborhoods and he would look at the old houses is if Chacón, Manuel Torres, El Chato, Salvaorillo padre and Currito el de la Jeroma still lived there. I like this, it moves me, specially coming from a young kid (as he was then) because this guarantees the future of the great cantaores aficionados. The album he has just released, Quimeras del tiempo (Chimeras of Time), is a jewel because it summarizes all of this: the feeling and the passion of a young, traditional cantaor who possesses a thrilling sense of the jondo. Maybe there is a little disguise in the way he sings, in the way he performs the most basic palos with a certain mimicry. Yet this happens all the time, it’s nothing new, it has always existed, from the days when Mojama adopted the styles of Chacón and Manuel Torres, and when those two, the kings of cante in their own time, adopted the styles of Silverio and El Mellizo. When Ezequiel Benítez sings in the manner of Antonio el Chaqueta, it’s not a blunt imitation, but rather, an interpretation of that cantaor. The same happens when he attempts to sound like El Chozas de Lebrija in his unique bulerias, or like the great Aurelio Sellés singing alegrías de Cádiz. Ezequiel gets into these masters’ souls to find their essence, to understand them and their cantes.

He tries to follow the musical score, the original, as a good performing scribe. It’s worth admiring the way he performs the cantes de compás, particularly the bulerías and the alegrías, with an astonishing ease, and it’s also fascinating the intensity of his seguiriyas, his fandangos por soleá and his fandangos de Pepe Pinto. One can tell he recorded what he wanted to record, and that he has done it with a commitment to leave a lasting legacy, something of his liking, so he can be recognized for what he is: a cantaor who is much more than interesting, who possesses unquestionable jondura and who has the required and indispensable knowledge to succeed. It’s not easy to be a cantaor in Jerez without belonging to some of the cante dynasties of this land. It wasn’t easy for El Chato, Salvaorillo, Chacón or Cepero, who, regardless, are among the best cantaores in flamenco history. Quimeras del Cante is definitely a superb album, with good guitars such as those of Rafael Rodríguez, Diego del Morao, Javier Patino, José de Pura and Manuel Parrilla, among others. The album has a good feel to it, a fitting ambiance. Ezequiel had a good time recording it and it shows right away, from his first cante. Let’s hope that this work helps him to achieve greater recognition and a place in the best festivals. Let’s hope this becomes a reality, and not a chimera. He has earned it.