The cantaor from Cádiz performed a magnificent recital in the privileged setting of Itálica’s Roman theater. 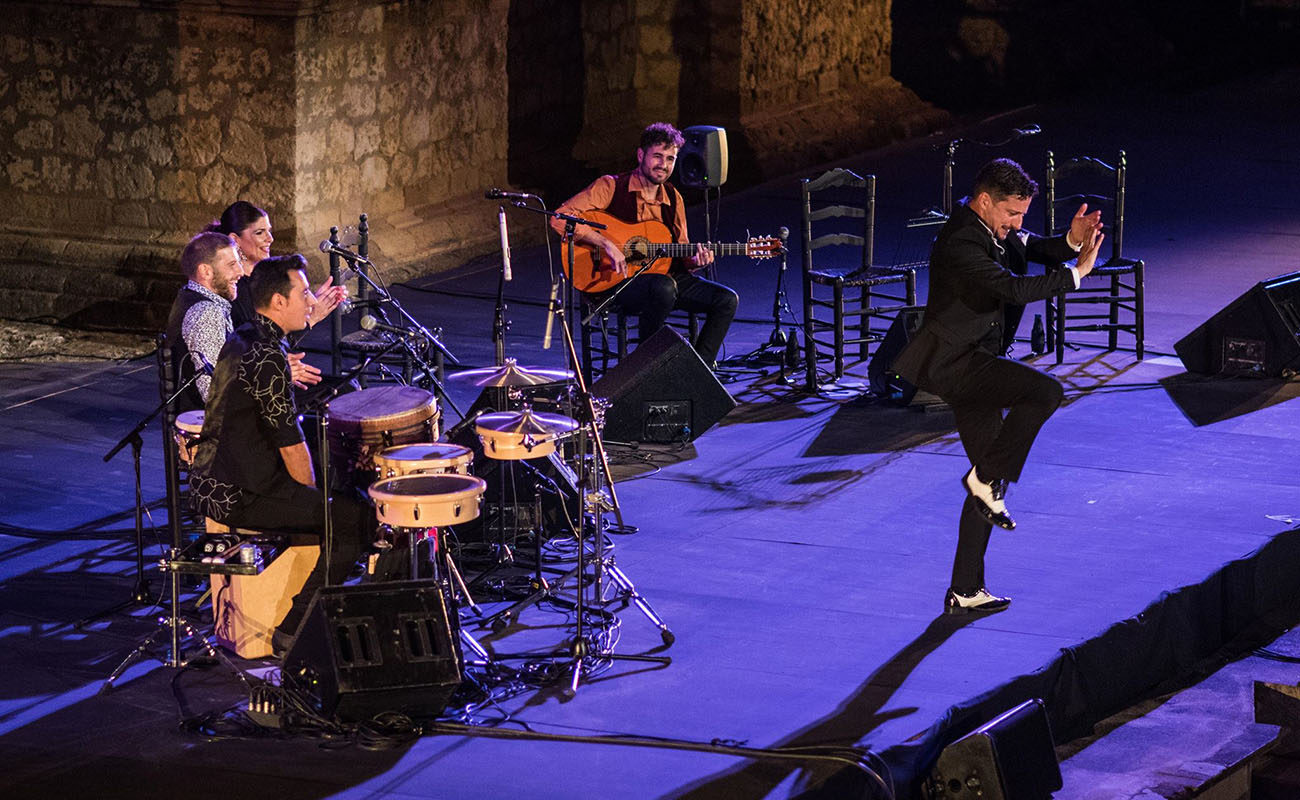 Anyone who has ever attended a recital by David Palomar (Cádiz, 1977) is well acquainted with the high quality of his shows. Not just because he’s been the foremost cantaor of Cádiz for many years, but also because of his total commitment and the splendor of his live performances. “David Palomar + Sexteto”, a production included in the series Flamenco Patrimonio (”Flamenco Heritage”) of the Junta de Andalusia’s Culture Department, had the additional allure of including six of the best musicians in arte flamenco (six!).

The idea is to create several summer festivals held in the old Roman Theaters of Andalusia, adding a touch of excellence to the musical production. The Itálica theater, located in Santiponce (Seville province), is perfectly suited for this, both for its fantastic acoustics and for its state of preservation. Looking at the lineup of musicians over the pulpitum surrounded by ten marble columns, with the half-moon reflected in the orchestra crescent, was enough to get the spectators’ hearts pumping and the artists inspired.

“It’s amazing what the Romans were able to do without cement, considering how hard is to build anything today”, said David, greeting the spectators. He already had the public in his pocket, something he learned from his mentors, like Chano Lobato or Mariana Cornejo, whom he evoked the whole evening at every gesture. That was after a warm nana dedicated to his son, blessed vine, and a magnificent medley of garrotín, cantes del Piyayo and tangos del Titi de Triana.

The seguiriyas were somehow hurried and lacked the depth customary of this cantaor from Cádiz. The one who achieved superb notes was Juan José Alba, who brought the darkest sounds of the ensemble from Chiclana. His falseta de Javier Molina earned oles and more oles from the public, so much so that David gave his all and saved face by singing Tomás el Nitri’s “Camino de Bollullos”. He then took us to the peak of his cante with the soleares of Ramón Jarana, Paquirri and El Chozas de Jerez, which he performed with all his heart after the tangos caeteros of Niño del Mentidero and the slow bulerías of Alfonso Gaspar, two of his role models.

Then it was the turn of the tropical rhythms, as he announced to the public’s delight. In those, David is unmatched. The transverse flute of Diego Villegas (Sanlúcar de Barrameda, 1987) called por alegrías and a touch of freshness was added by the voices of Anabel Rivera and Roberto Jaén, who played hide-and-seek with his percussionist hands. David sang cantiñas de las Mirris and the elegant figure of Abel Harana swept the 2000-year-old stage a compás.

The intimate moment was provided by David and the violin of the Frenchman Alexis Lefèvre, as they whispered a bolero of Nelson Pinedo and then performed Sevillanas (¡flamenquísimas!) dedicated to Manolo Caracol, Lola Flores, Carmen Amaya and Camarón de la Isla. All of this was seasoned by the soprano saxophone of Diego Villegas, who was amazing the whole evening.

From there we got to two and a half hours of performance with bulerías, tangos carnavaleros, tanguillos de Cádiz and Chano Lobato’s rumba “Cacharrito”. Then the king of compás from La Viña looked at the stands yearning for the approval of the spectators, who gave him their thumbs up. Ave, gladiator, the lovers of flamenco salute you. 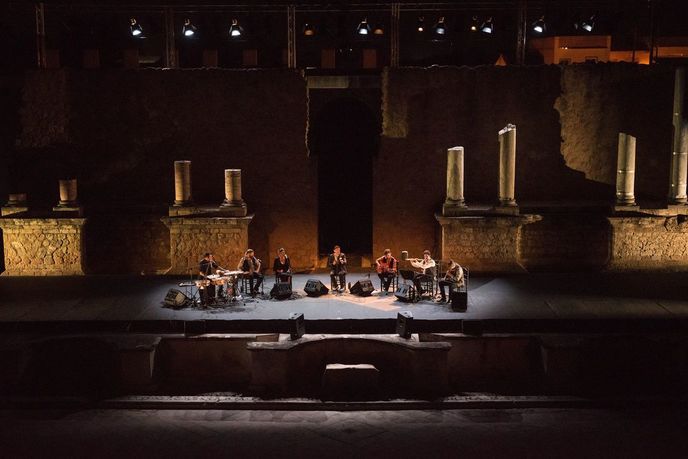 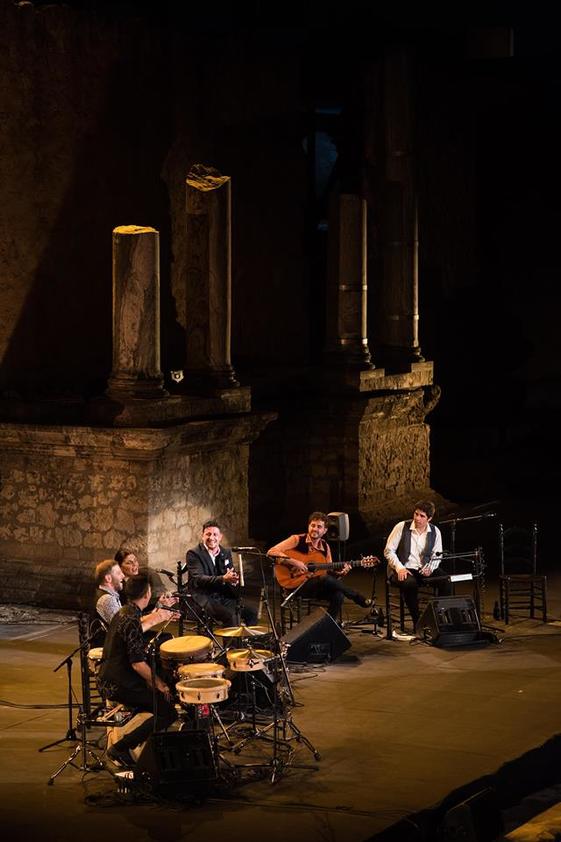 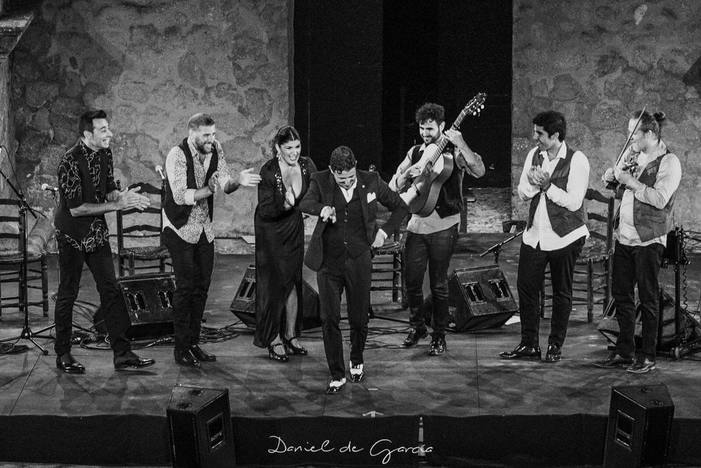 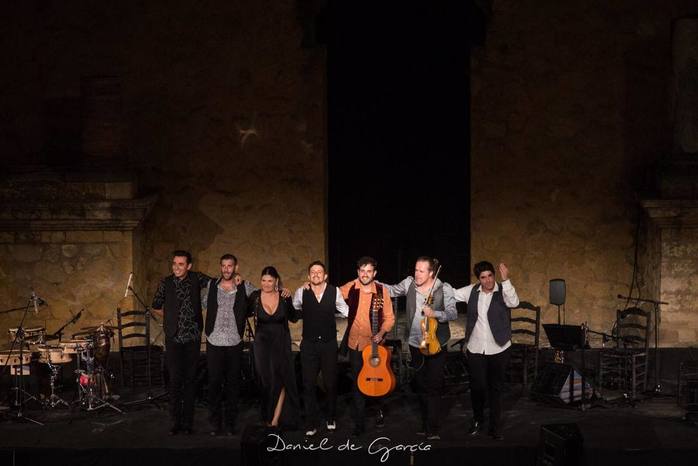