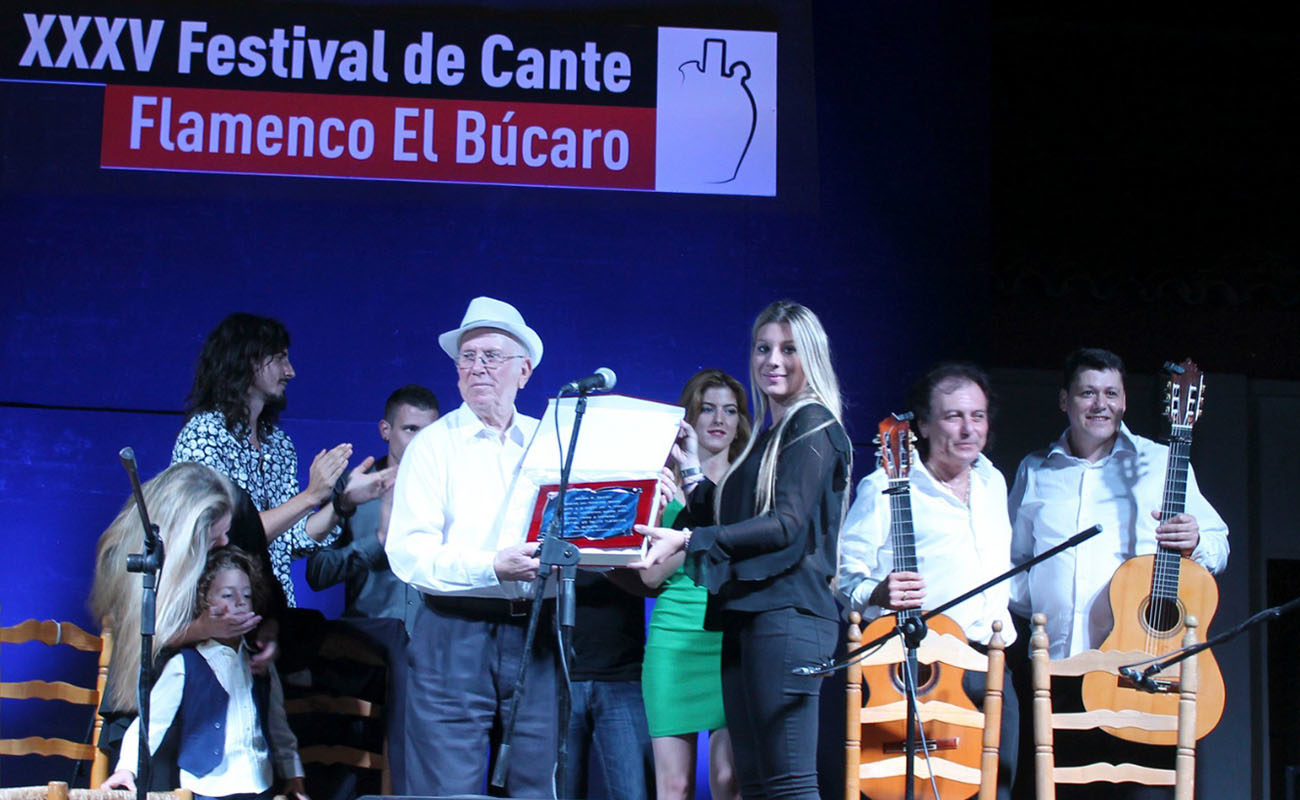 The Festival de Cante Flamenco “El Búcaro” traditionally closes the season of flamenco festivals in the province of Seville. For a few years it has been taking place at Hacienda Santa Cruz, the old sugar factory located next to the railway station, which became the nucleus of San José, a district in the municipality of La Rinconada. Thirty-five editions attest to its quality, and that of its aficionados, who know how to enjoy and listen to traditional cante jondo.

“What’s a búcaro, dad?”, asks a kid with big eyes who doesn’t take his eyes off Antonio Carrión’s guitar. “It’s a clay vase used to keep the water fresh in the field. Farm stuff, you won’t see any in the city”. Thirteen kilometers away, the Bienal de Flamenco de Sevilla attempts to fill up wells and puddles, pile up pitchers and jugs, something to do with parity, apparently. At the Bienal de Flamenco they don’t know what a búcaro is, either.

On stage comes the spring water we all shall drink. It’s José Antonio Carrión Sánchez “Carrión de Mairena”, born in Mairena eighty-six years ago. He is the father of the evening host, the guitarist Antonio Carrión. Nephew of Cancuna, first cousin of Cascabel de Mairena and Niño Segundo, that blessed cantaor of Mairena who served wine por soleá on Castilla street. With his white hat and his face devoid of any wrinkles, he came to the festival to say farewell to cante., leaving us the fresh water of his soleares:

After the tribute to Carrión, by his granddaughters, the palmeras Concha and María Carrión, and by La Rinconada City Council and Seville’s Provincial Council (long life to the public administrators who spare some money for flamenco), a big name of cante climbs on stage. It’s Alfredo Tejada, who comes with his Lámpara Minera award lighting up his voice.

From Málaga, although settled in Granada since he was ten years old, Alfredo left his shirt in rags after he sang the soleá de La Roezna, closing as Joaquín el de la Paula in the style of Tomás Pavón. He did it with the guitar bridge on eight, as Antonio Carrión played on his left, in a little space where hardly a child would fit. Before that, Alfredo had shown his superb skill por cantiñas, tientos with traditional lyrics, very well done in his own style, and the lyrics of Enrique Morente’s La leyenda del tiempo, finishing the session with a round of tangos by that master from Granada. Then, por bulerías, he came to Santiago and left by San Miguel without stopping on Porvera street, “without signing a document” and “with love broken and worn out”, as the lyrics of Fernanda and Bernanda go. 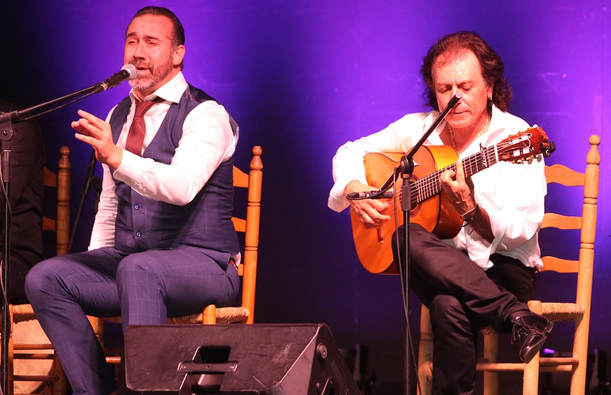 The baile of the young Isaac Tovar, from La Rinconada (who was a pleasant surprise for the presenter of the festival, Manuel Bohórquez, as he “dressed like a bailaor, something very unusual these days”) swiped the dust off the stage before and after the intermission. He did well por alegrías, accompanied by the cante of Juan Mairena, and was even better por soleá, where he gifted us with his beautiful postures and an elegance that reminded us of a bygone era. 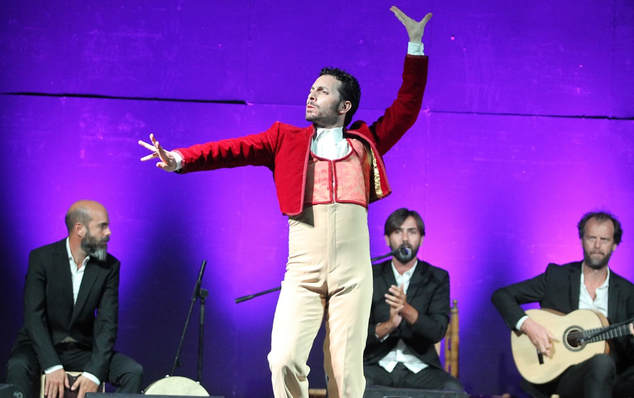 We could sense the expectation when it was announced, around 2 AM, that the next performer would be David Palomar, the unquestionable king of the cante of Cádiz. David knows how to own the stage from his chair, to which he seems attached by an invisible elastic band, as he tries to get up at the end of each verse por alegrías. There is joy in his face, reflected in the public, when he remembers Chano Lobato, La Perla and his teacher Mariana Cornejo. His tanguillos de Cádiz are impressive, unparalleled nowadays. And last night he managed to change his smirk when he nailed solemnity to the chilling scream of the seguiriya, I don’t know how I came up with such simile. 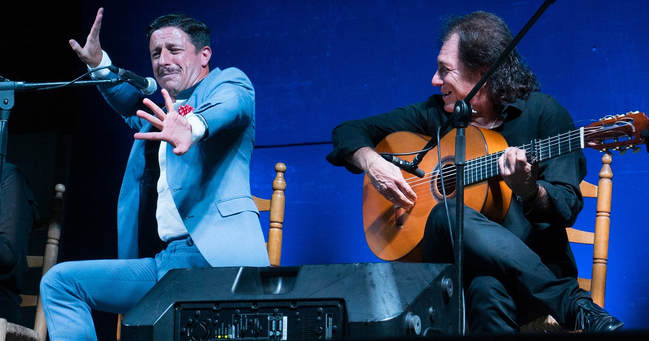 And when it seemed that the night could only decline, with so many pinches with oles, and so much sugar candy, in short, so much fresh water coming out of the steep vase, come to palacia with another Mining Lamp, oh, my love , with a guitarist from San jose. They are Miguel Ortega Y Manolito Herrera , respectively. When they finished the series of soleares apolás, server had already run out of plasters. I’m going to sing for seguiriyas, dedicated to Manolo Bohórquez, who has just announced that next Monday, the 24 th, The Andalusian Post Office will be out for the last time. Shiver of chill, goring in the lower abdomen. With the compass marked, falsetas colors and cheered by the respectable. And when it seemed that the fish was sold, fandangos by Paco Toronjo from the proscenium. We go to Seville, to see what they put in the Biennial. 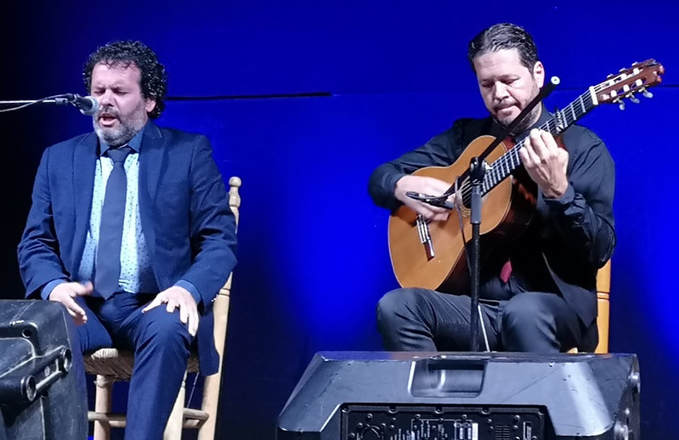