Halfway through the Festival de Jerez, we are faced with Javier Patino and José Quevedo 'El Bolita'. Two different concepts based on the schools of Balao and Carbonero, historic masters of flamenco guitar in Jerez. 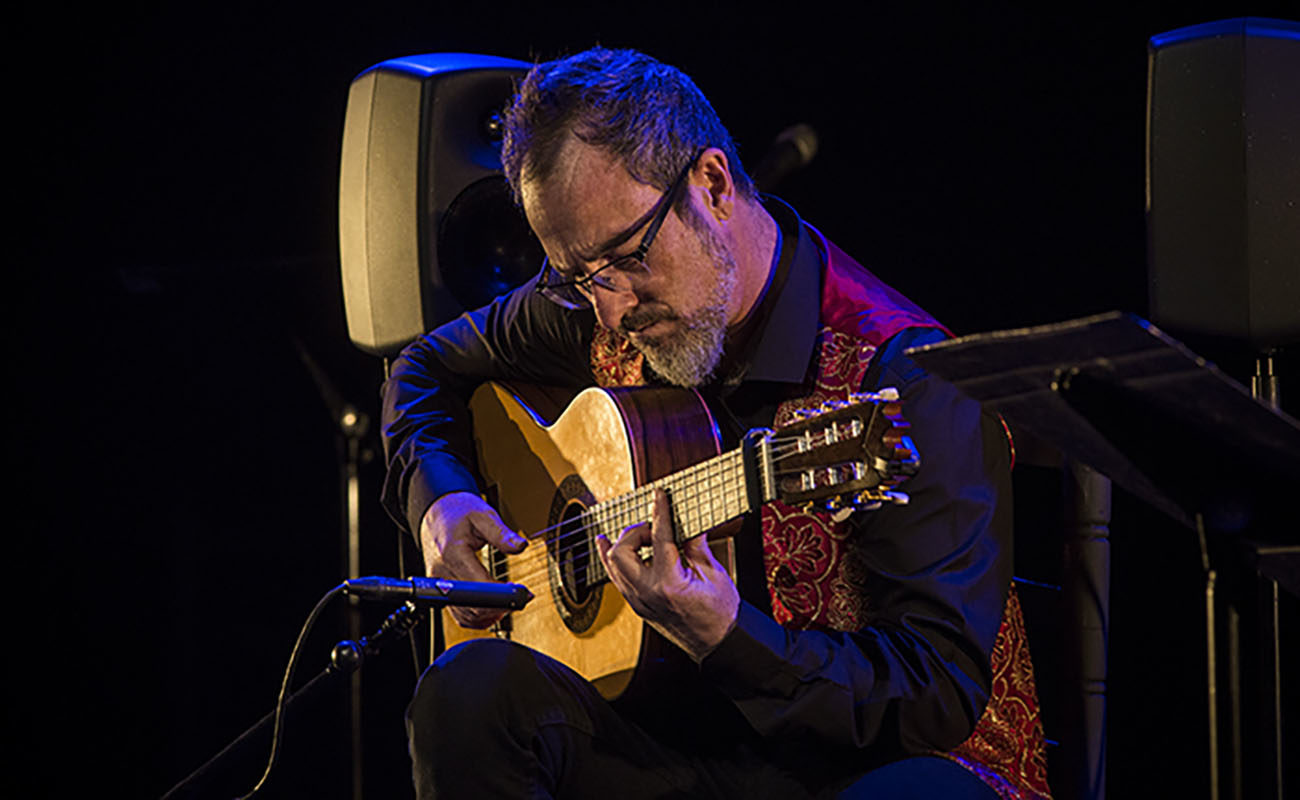 It’s time for flamenco guitar in the Festival de Jerez. Halfway through this event, we are faced with Javier Patino on March 1st, and José Quevedo ‘El Bolita’, the following evening. Two different concepts based on the schools of Balao and Carbonero, historic masters of Jerez whose important contribution to flamenco guitar has barely been acknowledged, since they’ve spawned the most prolific generation of flamenco guitarists up to now. Having said that, we focus on each performance. Patino conceives his music from a traditional perspective, certainly creating his own language but sounding like 21st century flamenco. He’s personal, introverted, distinct, a cante aficionado, humble and grateful. This Festival continues to acknowledge his worth, although that’s not the case of the city itself, where he seldom has the opportunity to perform. Yet, it doesn’t matter, because who doesn’t ask, doesn’t owe. In his recital titled Deja que te lleve (“Let me take you”) he invites us on a delicious trip without barriers, where we make some stops, as in the bulerías together with Salmonete, whom Javier brings to this festival, or the composition Pepa, dedicated to his wife, where he pours all the creativity of his mythological spirit. On the other hand, José Quevedo ‘Bolita’ demonstrates in this occasion a more extended universe regarding his concerns and signs. With Caótico Redux, he continues to take to different parts of the world his most conceptual production, bringing his flamenco music closer to other genres such as jazz or blues, together with great percussionists, wind-instrument musicians or the great double bass of Pablo Martín Caminero. We find bulerías, soleá, tientos and tangos or alegrías, but everything is done through his filter, which adds to each composition his own sounds, taking us to hidden places and making us feel things we had never felt before. It’s fair to remember that an extended version of this production was awarded a Bienal de Sevilla ‘Giraldillo’ in the category “dialogue with other genres” and it will also be staged next summer in Jerez in the series Noches de Bohemia. Bolita is something else.

Ana Morales and Mercedes Ruiz performed at the Villamarta theater. In Sin Permiso (Canciones para el silencio), the former chose to seek her inner self by pondering what happened in her past and discovering the meaning of each moment that made her into who she is now. Her memories — and perhaps temporary fears, existential doubts or dreams that propelled her to the present — are dissected through well-executed choreographies and a warm a simple staging. Everything follows a thread which leads us to the gift of her inner self. On the other hand, in Tauromagia Mercedes ads yet another contribution to the work of the genius Manolo Sanlúcar, translating into baile the tracks of that album. It sounds easy, and perhaps we summarize it too swiftly, but on stage she achieves a show of very high quality, where we fully understand the harmony between David Lagos (cante), Santi Lara (main guitar) and Mercedes. Having the music of the master Sanlúcar as a base may seem like an advantage, although it’s also a great responsibility with a lot of weight. We once again enjoyed baile without tricks by a bailaora from Jerez who always keeps the common sense in her shows, something we appreciate.

In the late hours of Friday, Beatriz Moralez performed in the Sala Compañía venue her show Hembra Alpha, a vindication of women’s baile. She put a strong focus in her accompaniment, in cante as well as in baile and guitar, besides percussion and even in the violin of Bernardo Parrilla. We must highlight the performance of Antonio Agujetas Chico, one of the jewels of Jerez’s young cante who added his flavor to seguiriyas and malagueñas, as well as to the tarantas which introduced Morales’ several bailes. He’s visceral, with strength and nerve, giving it all at every moment. The voices of Sandra Zarzana, Carmen Grilo and Rocío Parrilla are well-suited for baile, particularly because their camaraderie and good spirits are apparent on stage, something that helps to maintain the rhythm.  María José Franco, a bailaora from Cádiz who enjoys maturity in her baile, showed her mastery in Volver (“Return”). “How can you return if you’re always dancing?”, said the off-air voice of her little one. María continues her long career, temporarily interrupted by the birth of her children, in this show together with Luis Moneo, that voice from La Plazuela district which makes everything better. Fine baile in the alegrías, more traditional in her tangos and exceptional in the soleá, which has been one of the best moments in the 23rd edition of this Festival. 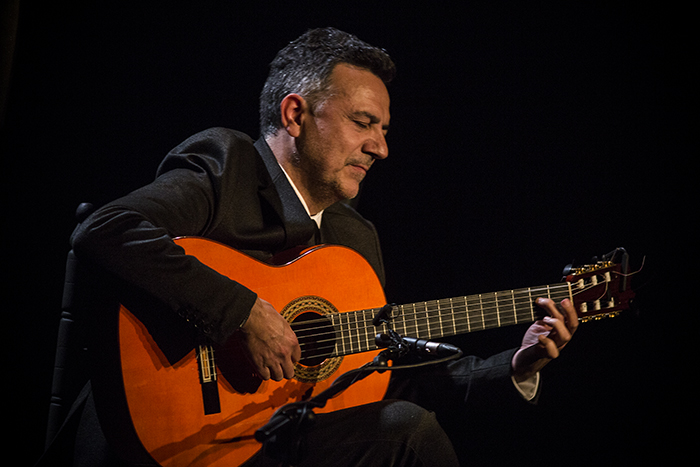 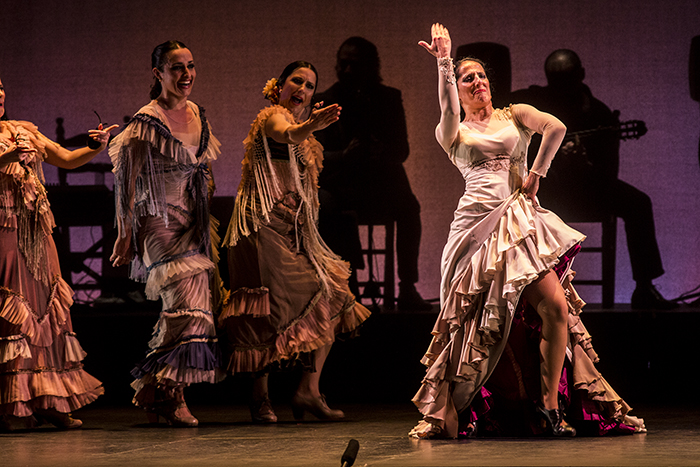 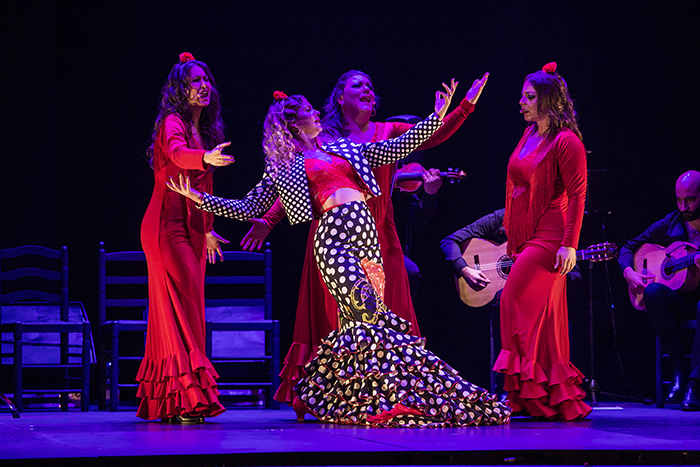 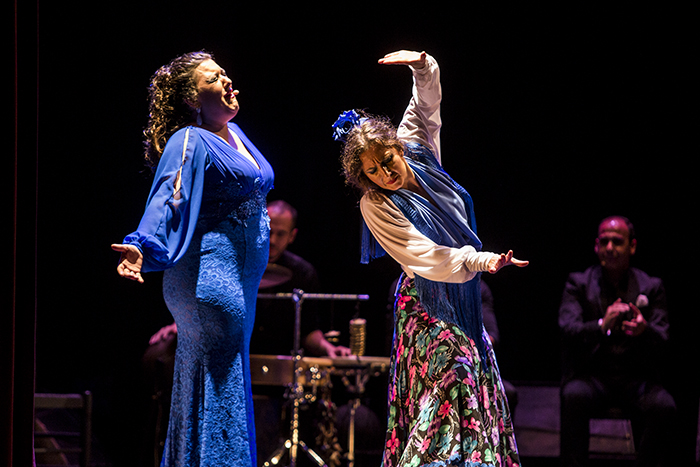 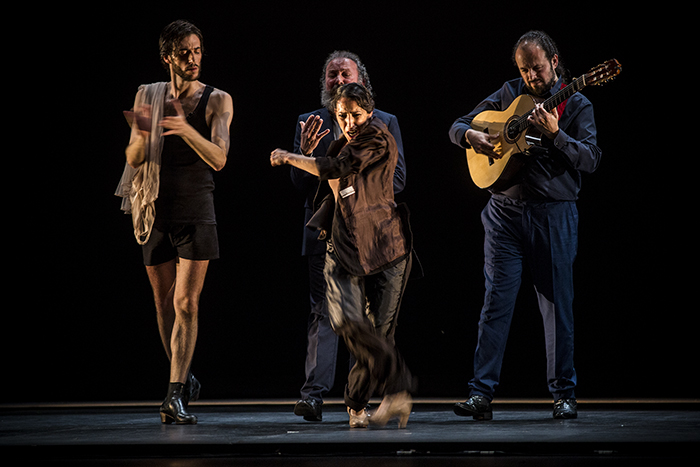