The aggressive thumping on the instrument, broken fingernails, legs kicking out sideways… Then, suddenly, a sweet caressing sound. It’s like having a bipolar lover. 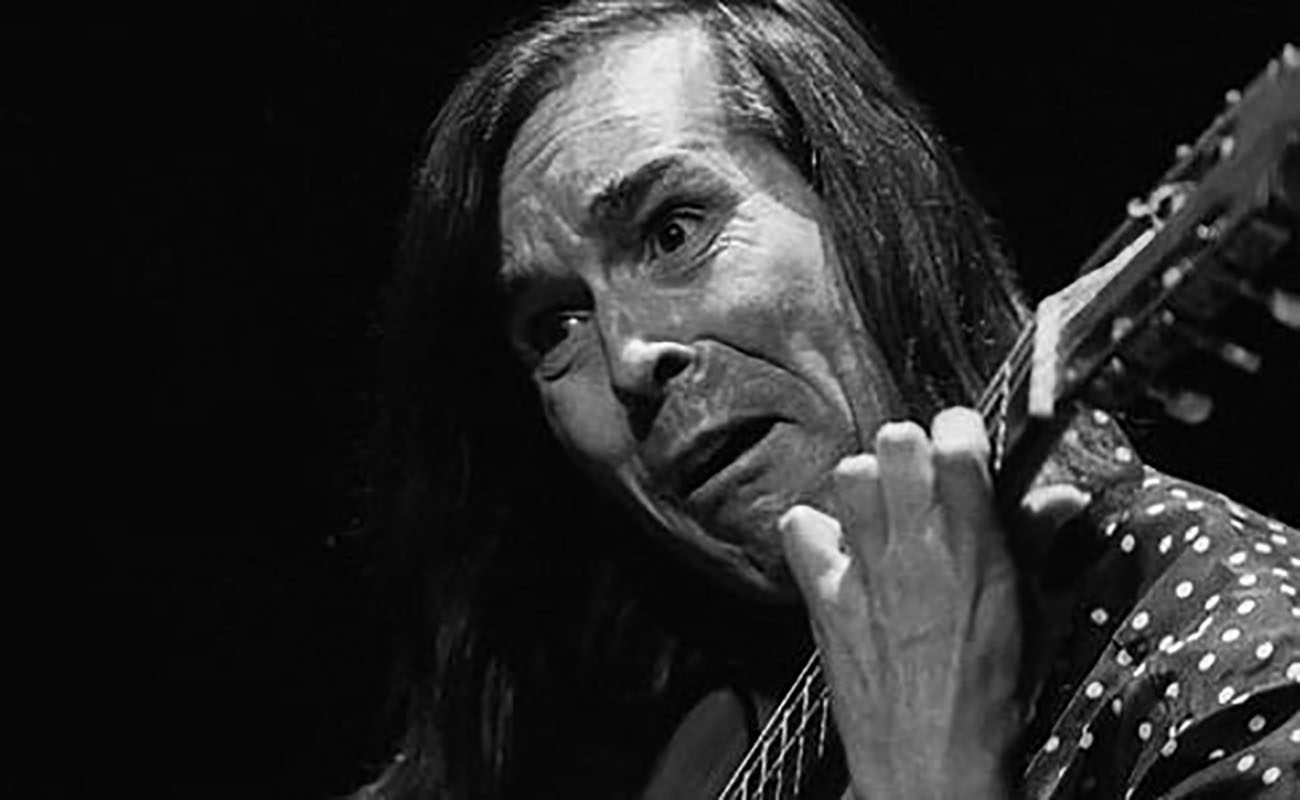 Once upon a time there was a school of flamenco guitar-playing that fans of the genre the world over recognized as the style of Morón de la Frontera and Diego del Gastor.  Possibly Jerez de la Frontera and Granada are the only other cities with easily-identifiable guitar sounds all their own.  And of these three, Morón surely wins first place in the personality contest: few flamenco fans would be unable to identify that peculiar twang that geolocates the music faster than Google.

I actually didn’t know if the word “naïf” used in the title of this article could only be used to describe visual arts, or might also be applied to music.  According to my desktop dictionary, naïf is an artistic style that represents reality by reflecting the ingenuousness of a child’s sensitivity, and is characterized by great simplicity of form and the rejection of academic technique.  Bingo!  It works for me.

Diego Torres Amaya, “Diego de Morón”, naif guitarist, son of Joselero de Morón and nephew of Diego del Gastor.  In the 1960s and 70s, we called him “Dieguito”.  Aside from his being a young adolescent, it was to distinguish him from his uncle, Diego del Gastor.  The “gastoreño” nephews, in addition to Dieguito, are Juan and Agustín, effervescent and authentic, more flamenco than anyone, and the very brilliant Paco del Gastor, guitarists all.

Dieguito, Diego de Morón was always different from the rest.  Fighting with his guitar to drag out the notes kicking and screaming, fingers getting caught in the strings, the aggressive thumping on the instrument, broken fingernails, legs kicking out sideways…  Then, suddenly, a sweet caressing sound.  It’s like having a bipolar lover.  And always the unmistakable attack, the anachronistic, marginal, unpredictable, irregular but honest sound. Music that’s immune to evolution.  When Diego clicks into the groove, he’s the best guitarist in the world.

Memories taunt and tantalize.  Were they dreams or did all that actually happen nearly 50 years ago when there was only one television set in town?  Going up the hill to Casa Pepe (to watch the one television set and have a tapa of spinach with chickpeas) in search of flamenco friends, or the Bar Alemán, the Pasaje, Bar Barea, the Miguelito…you could often find Diego de Morón at the Miguelito, or living at the Fonda Pascual.  Lanky and thin even now, just quirky enough to be a card-carrying flamenco, with his homespun science and philosophy.

Of all the relatives of Diego del Gastor, Diego de Morón is the most faithful to the school (when I lived in Morón, strangers would occasionally come to my door asking for directions to the “school”, which of course did not exist in any physical sense), the one who best captures that peculiar sound that isn’t like guitar-playing from anywhere else.  A second generation of Morón followers who were too young to have known the elder Diego, have adopted Diego de Morón as their rallying point and figurehead.

On Friday, April 5th, in Alcalá de Guadaira, at the Teatro Gutiérrez de Alba at 9:30 pm, Diego de Morón will be the object of a tribute to commemorate his 50 years of profession.  A great number of artists will participate, including Juana Amaya, Pepe Torres, David el Galli, Paco Amparo, Javier Heredia, Luis Peña, Juan del Gastor, El Torombo and many many others.