Morón de la Frontera.  One of the points that marks the geographic rectangle of flamenco in Western Andalusia.  An area generously sprinkled with names that evoke the aroma of a particular way of understanding this art-form.  Less aggressive, warmer…In this town, the venerable Tertulia Cultural Flamenca El Gallo, awarded the Medalla de Oro de la Ciudad in 2015, is celebrating 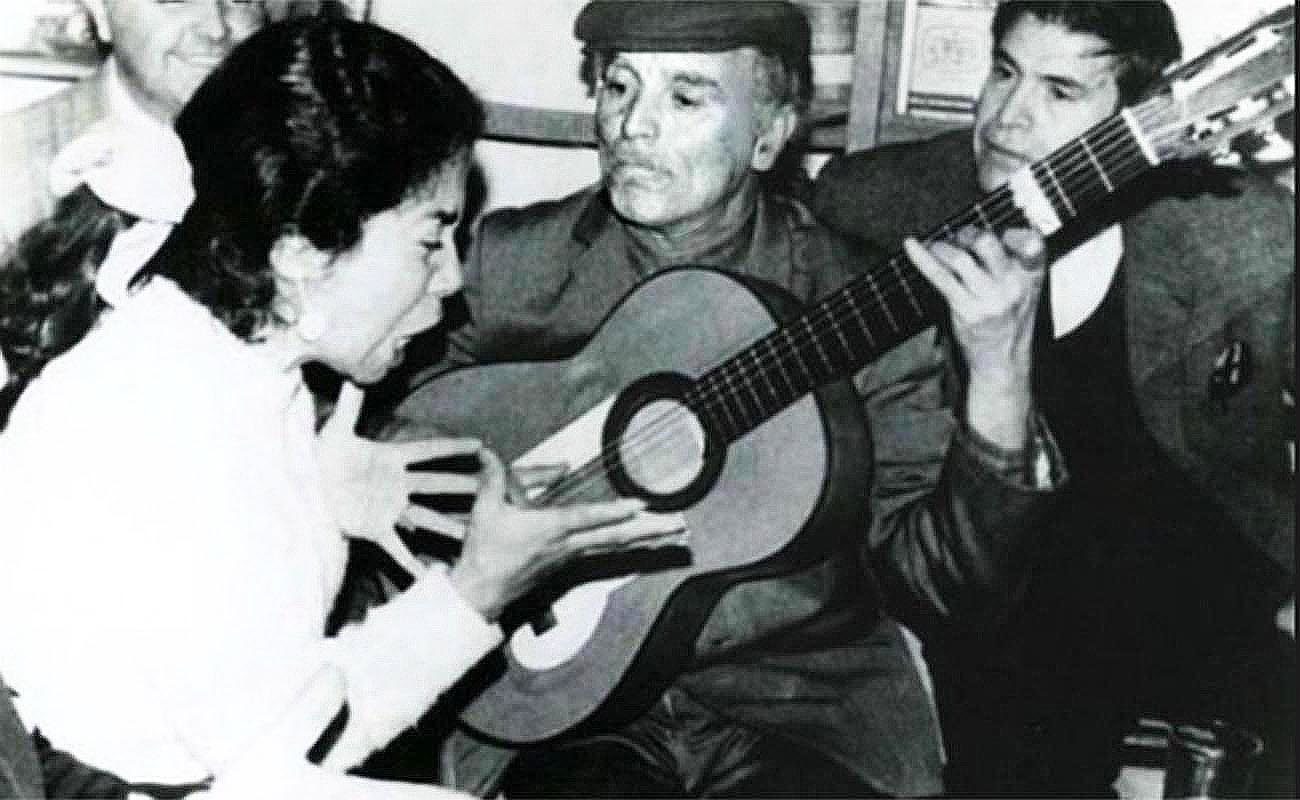 Morón de la Frontera.  One of the points that marks the geographic rectangle of flamenco in Western Andalusia.  An area generously sprinkled with names that evoke the aroma of a particular way of understanding this art-form.  Less aggressive, warmer…

In this town, the venerable Tertulia Cultural Flamenca El Gallo, awarded the Medalla de Oro de la Ciudad in 2015, is celebrating its 50th anniversary, 1970-2020, and preparing an admirable program of activities.  To this end, and in order to raise funds, a CD has been released, Son de Oro, with previously unpublished recordings of artists who received the Insignia de Oro of the association over the years.  It’s an impressive list of artists:  José Mercé, Antonio and Manuel Mairena, Gaspar de Utrera, Miguel Vargas, Fernanda and Bernarda de Utrera, Chano Lobato, Mariana Cornejo and Perrate de Utrera, with guitarists Enrique de Melchor, Paco del Gastor, Diego del Gastor, Chanito and Pascual de Lorca.  In addition, next month at Morón’s Teatro Oriente a benefit concert will be presented with important collaborations.

This morning we spoke to Diego Cano, president of the Tertulia since 2005, and Alfonso López, Spokesman and Secretary of the 50thanniversary commission who shared impressions and information about plans and activities:

Diego, Alfonso, congratulations from Expoflamenco to the board of directors and all the members of the association for this half-century of commitment and hard work.  The years 1970 to 2020 cover dramatic evolution of flamenco.  What events or tendencies has the Tertulia Cultural Flamenca El Gallo been witness to over the years?

We’ve witnessed the birth of the Gazpacho Andaluz Festival which in time would come to depend largely on this Tertulia that came into being in 1970.  We’ve written unforgettable pages in the history of flamenco, awarded gold insignias, participated in fairs, staged recitals and contests with some of the biggest stars of singing, dance and guitar, but above all else, we were able to count on the collaboration of the famous guitarist and fine person, Diego del Gastor, who has long represented the flamenco of Morón.

Are flamenco peñas or associations still relevant, or are they destined to disappear?

Thanks to the tenacity of the members, the peñas manage to keep afloat, albeit with difficulties, but with imagination and dedication we keep moving forward.

Does the peña receive institutional support of any kind?  Is there enough financing for flamenco associations?

Economic support, very little…a bit from the local government, but we presented a project aimed at schools, and it’s always paralyzed for lack of funding, despite the UNESCO designation of flamenco as a World Cultural Heritage.

Some valuable material has been collected and preserved by the peña.  Explain that project.

Our collection is very rich, and the proof can be seen in the release of the CD with previously unpublished live recordings, with lots more to develop other projects, in addition to photographs, posters, books, etc.

Diego, you’re the father of flamenco singer Moi de Morón.  What role do young people represent in the peña?  Is their participation cultivated?

Young people are of utmost importance, and our peña does everything to help and encourage them, which is why we have the yearly Contest for Young Talents, not to mention the recitals we organize with them.

In addition to the benefit festival and the CD you mentioned, what else is planned regarding the anniversary?

In addition to the festival and the CD, there’s a series of flamenco in the neighborhoods, in the schools, a culture month at the theater, expositions, lectures, etc., a full program considering the possibilities.

At this year’s Gazpacho festival will there be anything related to the peña’s 50th anniversary?  What’s the date it’s to be held?

This year the Gazpacho is programmed for July 6th.  There won’t be  much regarding the 50thanniversary because next year’s edition will he devoted to it. 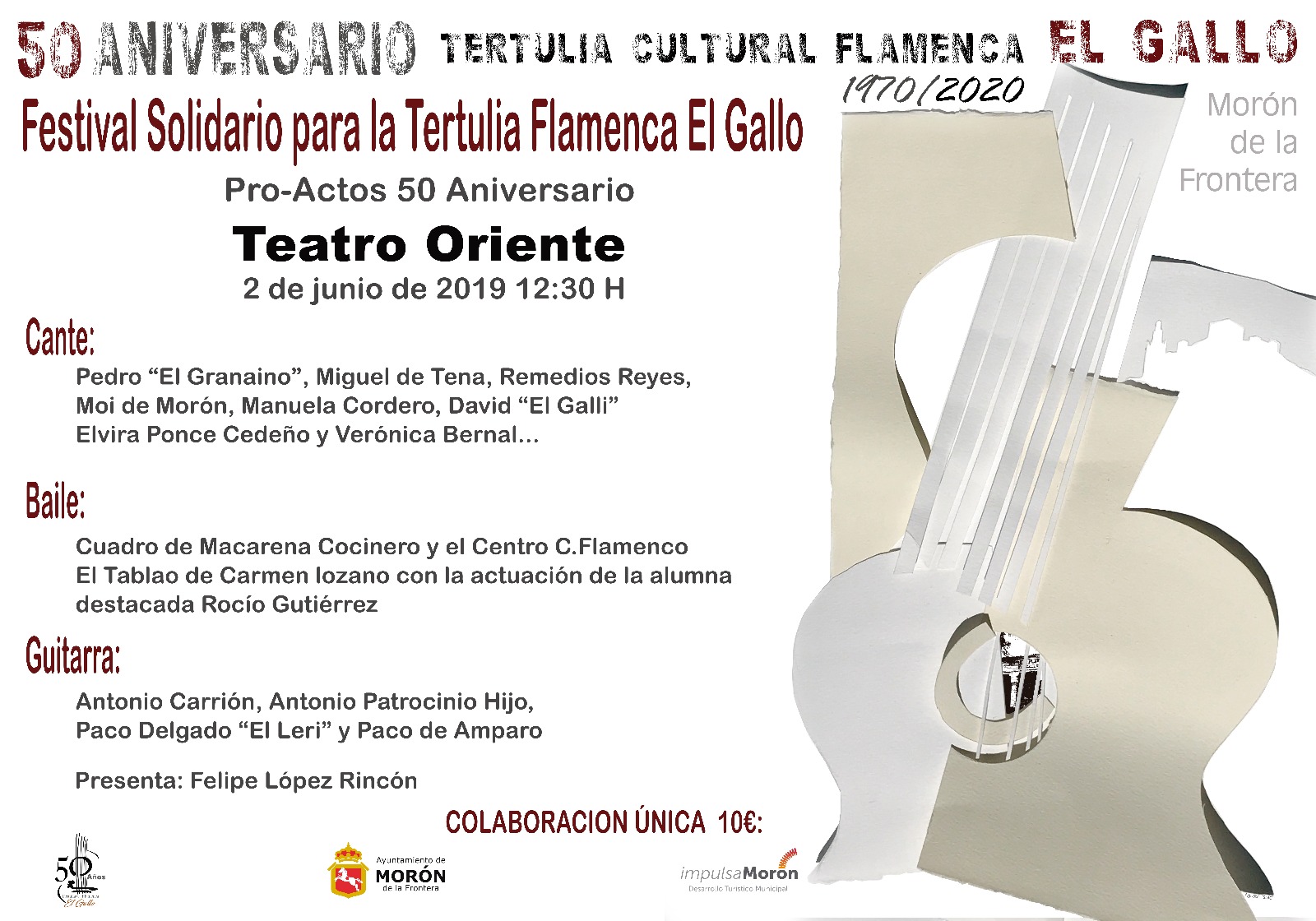