it was today that I felt compelled to remember my much-admired guitar teacher. 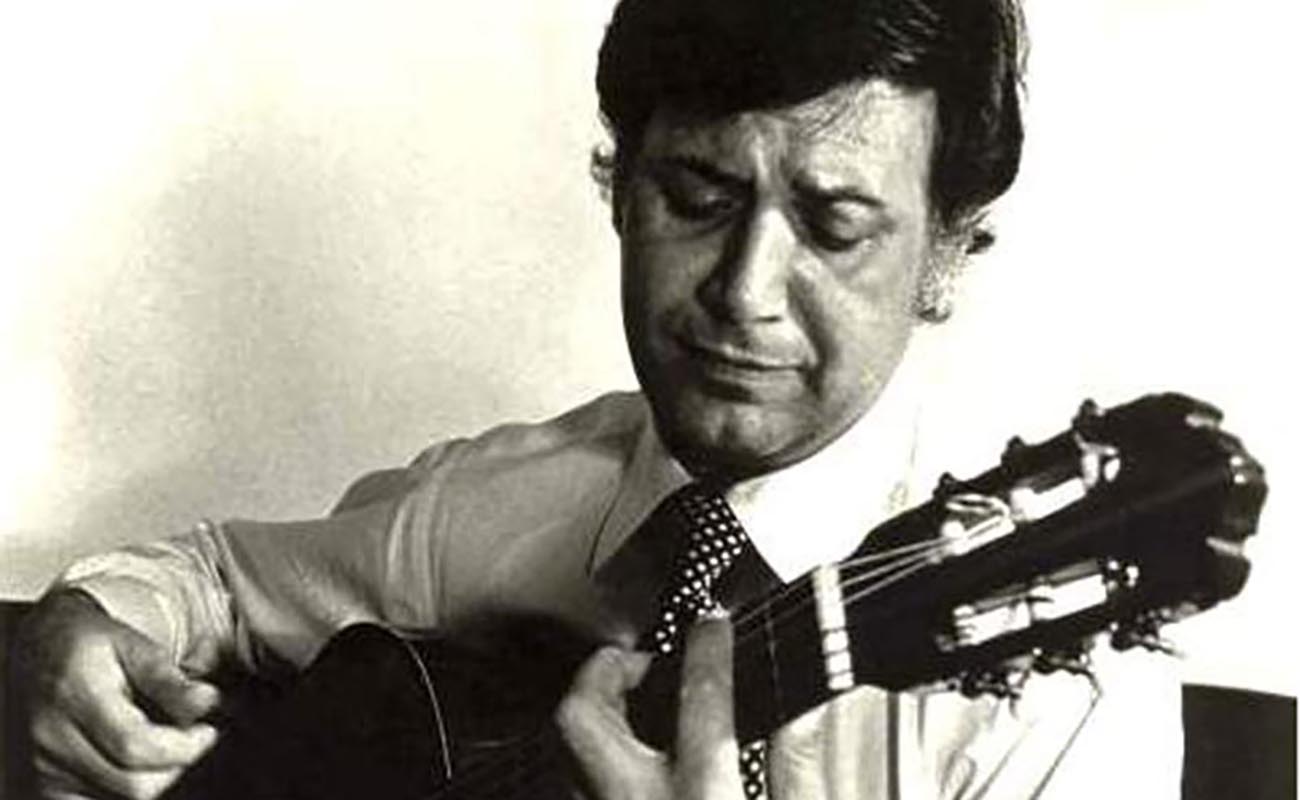 I’ve never been able to do that thing that journalists do when they write about noteworthy people or events that occurred a round number of years ago. Flamenco guitarist Mario Escudero was born in Alicante on October 11, 1928, and died in Florida, USA, November 19, 2004, but I didn’t feel like waiting four years for the “20 years ago” headline, because it was today, February 13th, 2020 that I felt compelled to remember my much-admired guitar teacher.

When my first teacher, Fernando Martínez of San Sebastian died unexpectedly, I had to get my jondo fix from another source.  Marío Escudero had recently set up a guitar studio in New York with classical guitarist Juan de la Mata.  Mario’s young son would sometimes be in the studio learning to place his little fingers on a small guitar.  On one occasion Paco happened to be there waiting for my class to finish in order to practice with Mario.

Mario Escudero often scolded me for not strictly alternating fingers to play picado.  He took me to meet Sabicas, and showed me some great bits and pieces, never a whole composition.  He explained the basics of music, for which I’m forever grateful, and taught me to use the barred G minor in cante accompaniment, harbinger of the expanded musicality that was becoming popular in contemporary flamenco.  Mario encouraged me to accompany dance classes and small performances, although I was too young to enter establishments where alcohol was served, so it was mostly community centers, schools and such.  At one point, he sat me down, solemnly informed me that “girls do not play flamenco guitar”, and suggested I take up singing or dancing to satisfy my hunger for flamenco.  Today’s feminists are appalled that he would have discouraged my enthusiasm, but that bit of wisdom spared me years of disappointment and frustration.

Google helps fill in some data.  Mario’s full name was Mario Escudero Valero Jiménez Valverde, and the family was actually from Camas, Seville with roots in Ciudad Real as well as the Navarre region and other parts of northern Spain.  As a young man he studied with several maestros, most notably, Ramón Montoya.  Mario Escudero was the bridge between the grand era of Montoya, Ricardo and Sabicas, and the brave new world propitiated and set in motion by Paco de Lucía, who would become Escudero’s protégé.

As an adolescent, Mario accompanied renowned dancer Vicente Escudero (no family connection), and also went on to play for José Greco, Antonio and Rosario and Carmen Amaya whose sister he married.  He accompanied an impressive number of great flamenco singers such as Tomás Pavón, La Niña de los Peines, José Cepero, Antonio Mairena, Juanito Mojama, El Sevillano, Canalejas, Pepe de la Matrona and Pericón de Cádiz among others.  He also appeared in several films such as Café Cantante (1951) in which he accompanies Ángel Pericet and Curro Terremoto with other stars of the era.

Mario Escudero, like Sabicas who also settled in New York, believed in the viability of the flamenco guitar as a solo concert instrument capable of conquering a global audience.  His many compositions include the brilliant bulería piece called Ímpetu, which many people mistakenly believe was written by Paco de Lucía who did record it, as did Gerardo Núñez.

The day Mario said to come to the studio the following evening to hear a terrific young guitarist, I remember saying “Paco who?”  Too young to disobey, and old enough to know I should do as I was told, I waded through ankle-deep slush to reach the studio for what I was sure would be a bore that only grown-ups could appreciate.  Ten or twelve key New York flamenco people stood in the small rehearsal studio with black walls as we watched the future of flamenco guitar take shape before our very eyes in the form of this boy, Paco de Lucía.

Mario’s fame grew steadily, nearly rivaling that of Sabicas.  He loved to tell the anecdote of the hand-written letter his father Jesús mailed from Madrid addressed simply “Mario Escudero, guitarrista, USA”, which was delivered to his home about one year after it was sent.  Sabicas would often quip about their friendship: “I steal his music, and he steals my girlfriends”.

Mario returned briefly to Spain where he had hoped to spend his golden years as a senior member of the flamenco community, and he did make some appearances, such as solo guitarist at the 18th Gazpacho Andaluz de Morón de la Frontera.  In 1987, the Cátedra de Flamencología in Jerez honored him with its award for flamenco achievement.

However, illness cut short his dream, and he returned to the United States for care.  The last I heard of Mario Escudero was a telephone call from his nurse in Miami.  She told me her patient was doing quite well, was in good spirits and played the guitar every day, which sounded like very good news.  But she then added “one question: the guitar doesn’t have all its strings, do you think we should get him the ones that are missing?”. 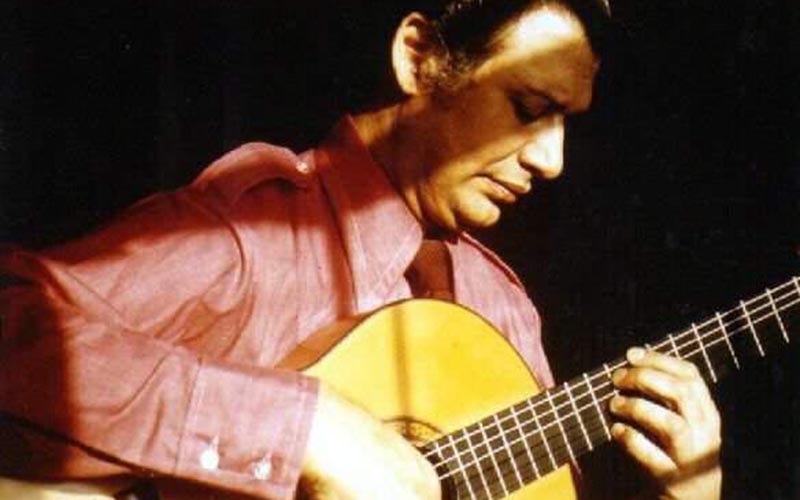 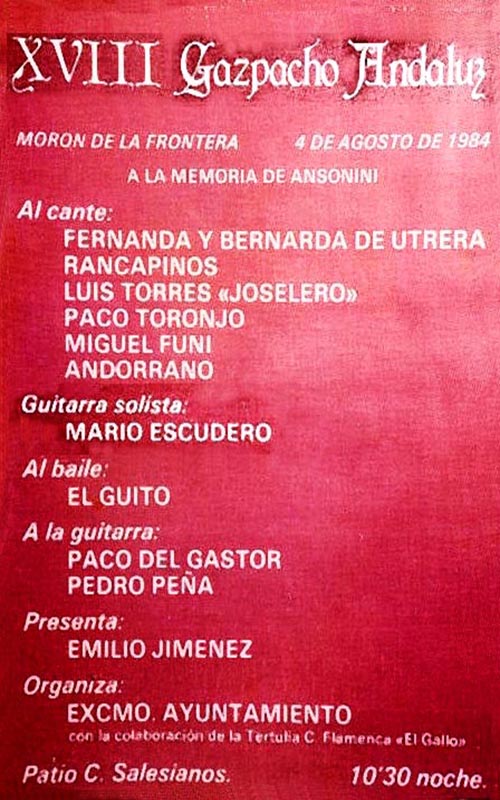