Home / Estela Flamenca  / Mystery and duende of a timeless document

Mystery and duende of a timeless document

In 1952, a half-century before Carlos Saura was filming this genre, director Edgar Neville (Spanish, despite the Anglo name), made Duende y Misterio del Flamenco: that’s 66 years ago. 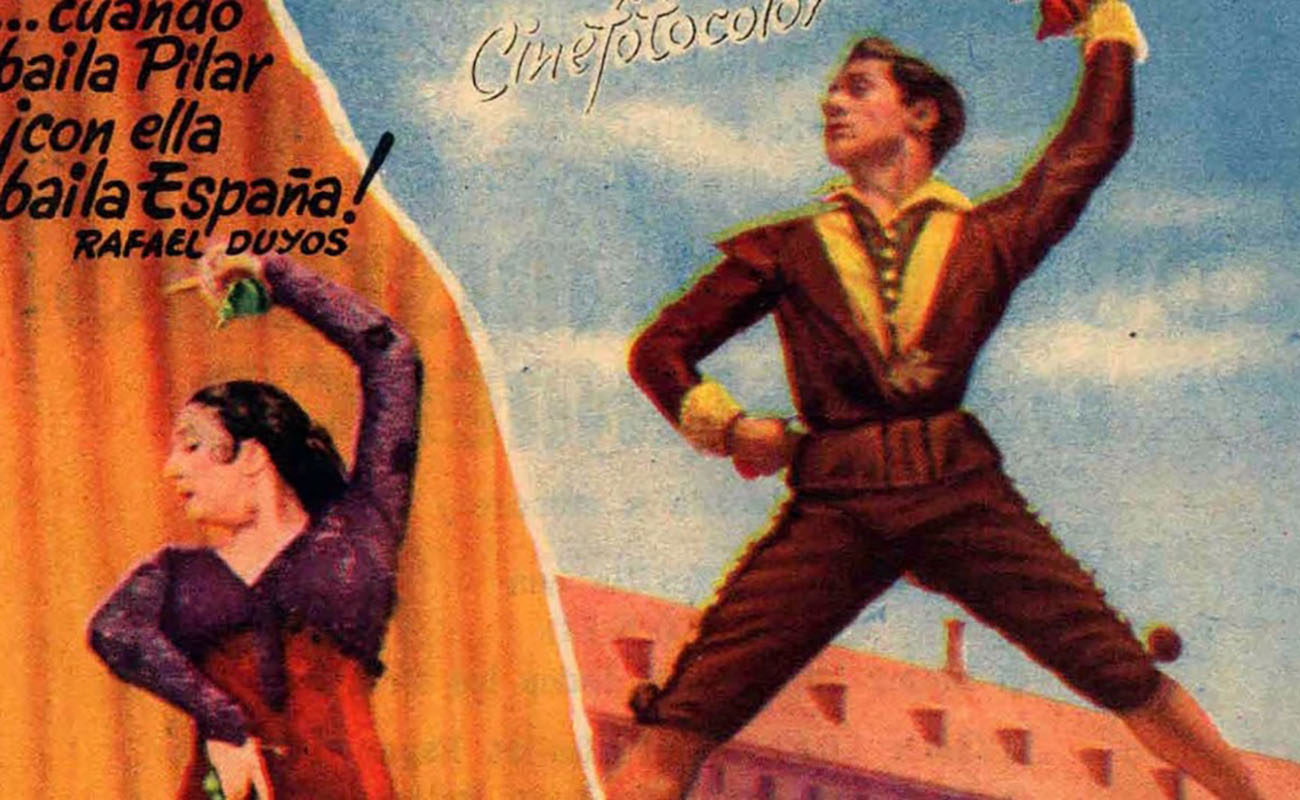 It’s funny…when I give talks or participate in panel discussions, I often get presented as an “investigator”. And it always surprises me, because I don’t really investigate anything at all, except my own memories and thoughts about flamenco. We have these brilliant people such as our very own Manuel Bohórquez, who actually does investigate, so we’ll leave that to him.

At this point in time, when flamenco fans seem to be looking to the horizon to see the shape of flamenco to come, while the pungent, rough-edged flamenco I grew up with in the 1960s and 70s is gradually dying out and sadly being forgotten, it feels like a good time to remember what is for many flamenco fans and experts, the greatest flamenco documentary of all time. In 1952, a half-century before Carlos Saura was filming this genre, director Edgar Neville (Spanish, despite the Anglo name), made Duende y Misterio del Flamenco: that’s 66 years ago.

As a chronicle of flamenco of the first half of the twentieth century, the 75-minute film has withstood the test of time surprisingly well, considering the pace at which current flamenco is evolving: an entire millennial generation considers Paco de Lucía and Camarón the “old masters”. If scratchy old recordings of singers we’re told to worship are sometimes a difficult swallow for young flamenco fans, Duende y Misterio manages to focus on a more contemporary transitional moment centered on dance, which was acquiring the sophistication it now so strongly embraces, and becoming the impetus that would lead flamenco to become a global cultural force. The initial impression is, cante has withstood the test of time far far better than guitar…we have Paco to thank for that…and better than dance as well.

Miracles tumble from the screen unto your eyes and ears, one after another… A youthful Chano Lobato does palmas for Aurelio Sellé on a Cádiz rooftop. Antonio Mairena is heard but not seen, singing siguiriyas for a short vignette about a romantic triangle, and another brief episode makes use of liviana-serrana in the voice of Jacinto Almadén to set the mood. This light theatrical touch manages not to get in the way of the cante.

There are flashes of gentle humor that have not gotten stale over the years. There is also a young woman, Mariluz, who is repeatedly seen dancing way too much, too superficially and frankly…not very well. Probably the film’s only failure.

We hear the voice of Manolo Vargas singing tangos de Cádiz for a young dancer with the backdrop of Puerto de Santa Maria. Also around the same area, we see the element which has aged the least, and which you could present today anywhere in the world as “current flamenco”; it’s a bulerías fiesta on a boat gently floating down the Guadalquivir. The irreverent gestures, the compás, the palmas…it’s a ritual moment that shows no signs of falling into disuse.

Folkloric and semi-classical dance, as well as bolero school, so important in the configuration of flamenco, are also included. The brilliant Antonio Ruiz Soler takes your breath away interpreting the Sonatas of Father Antonio Soler, Spain’s answer to Scarlatti.

There’s wonderful footage of Granada and Sacromonte, Vejer de la Frontera, Córdoba… The stark beauty of the landscape and the towns, the emptiness, the endless rows of white-washed houses not interrupted by high-rise office-buildings, fast-food shops or graffiti…and almost no vehicles.

Just that whiteness, the searing sun, the parched earth. And suddenly, two adolescent girls in Utrera, Fernanda and Bernarda (listed in the credits as “Bernarda y Fernanda de Utrera”), and Bernarda sings soleá for an impromptu dance in the unpaved street: Por el hablar de la gente, olvidé a quien bien quería, mientras viva en el mundo, se me acabó de alegría… it’s like hearing it for the first time, and you have the feeling of being witness to something so real it’s unbearable. For those who remember Spain in black and white, there’s a terrible sense of loss, even when prosperity has replaced those postwar times of dire poverty.

The majestic Pilar López with her Ballet Español lays out a sober vision of Spanish and flamenco dance for future generations, with the elegance and aplomb that would eventually infect an entire crop of male dancers under her influence, including Antonio Gades, Mario Maya, El Güito, José Greco, and the nearly-forgotten Alejandro Vega, not to mention the legendary Mexican-born dancers, Roberto Ximénez and Manolo Vargas. Alejandro Vega is seen partnering Pilar in an early example of a couple dancing caña, while the cante of caracoles is danced by the entire company featuring Vega and Ximénez-Vargas, whose artistic sobriety actually looks quite modern. Roberto Ximénez also dances zapateado atop some rather small tables to the guitar accompaniment of Luis Maravilla.

One of the most extraordinary moments is a scene in which we see Pastora Amaya singing bulerías seated by her husband, Farruco “Viejo”, grandfather of the current Farruquito. Pastora died tragically not long after the filming when the vehicle in which she was traveling was hit by a train. A 16-year-old Farruco, with their infant daughter Pastorita on his lap, sits next to his wife, proudly grinning, keeping compás, smiling at the camera and even mouthing the verses his young wife sings, oblivious to the tragedy soon to befall his family.

The spectacular ending is the great Antonio dancing to the martinete of el Pili, (father-in-law of the legendary singer Chaqueta). Commissioned by Neville specifically for the film, Antonio’s creation is considered the first danced martinete, and remains a classic to this day.

Good luck trying to find this amazing piece of film. Hunt it down at YouTube if you can…there are several versions: black and white, color, with or without English subtitles… Invite a couple of flamenco friends over for wine and tapas…sit back and enjoy… 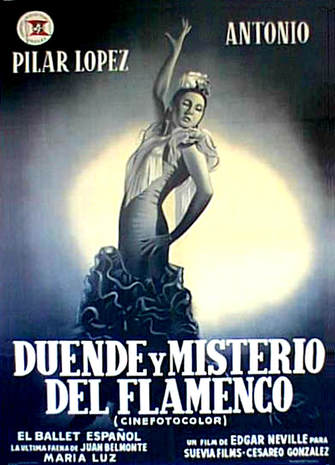