They used to say about Manuel Torre that once you heard him live, his voice got into your ears and stayed there forever. This is what happens to me with Paquera de Jerez, her voice keeps echoing in my head fifteen years after it was forever silenced. 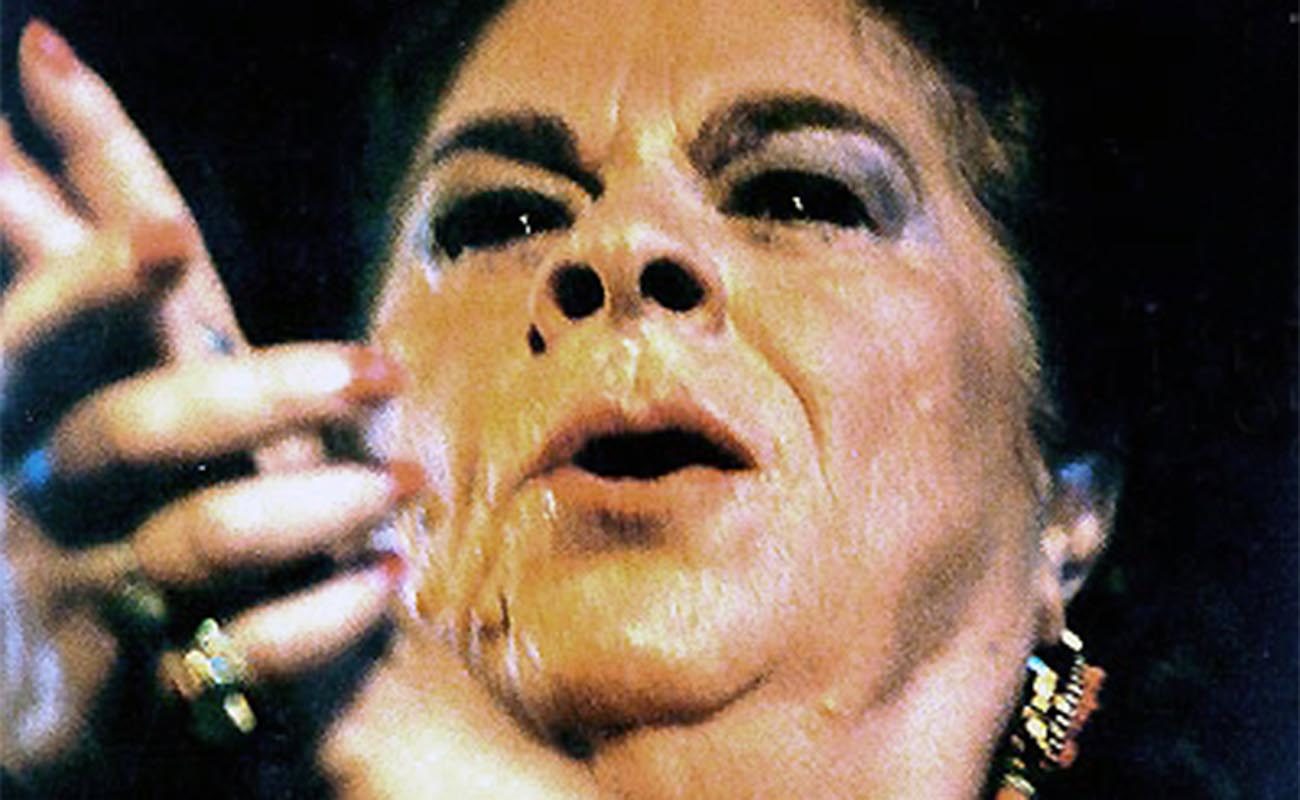 I’d gone to Málaga that sunny April day in 2004 to visit a dancer I’d known for many years from the Taberna Gitana, spend a couple of days having roasted sardines on the beach and seeing flamenco friends Cañeta and José Salazar.  We had only gotten through our first couple of beers when we heard the news on television: Francisca Méndez Garrido, “Paquera de Jerez” had just died. The sea breeze stopped blowing for a moment, and I looked at the people around me, but they seemed not to be aware that a force of nature had fallen silent.

I had to get back to Jerez.  I didn’t even know why, but I had to return.

My head was full of images from a year and a half earlier when the Festival del Cante de las Minas de La Unión was dedicated to Paquera.  Numerous honors and plaques, words of praise for this bigger-than-life artist who at the time had just made her first and last trip to Japan where the adventure was immortalized in the fine documentary Por Oriente Sale el Sol of Fernando González-Caballos.

I was in the first row for her historic 2002 performance in La Unión.  Never before had I sensed so strongly the division that exists between the fandango zone of southeastern Spain, and the soleá-siguiriya-tonás zone of the west. Paquera felt it as well.  After receiving a long and sincere ovation worthy of Her Highness, the lady from Jerez gestured with both hands like the Queen of England, and spoke with long pauses as if addressing beings from a distant planet: I like your songs…very much.

Her stage presence was overwhelming. Standing, she clutched a chair on either side as if providing an electric arc to transmit her message. Her surprising voice pumped out a megadose of flamenco that made our insides tremble.

All this ran through my mind as I tried to fall asleep in my apartment that night back in Jerez beside the Plaza del Arenal, as the Queen of Bulerías lay in state at the old Town Hall, less than a hundred yards away.  It was a strange feeling knowing she was so close by, and at just past three in the morning I felt compelled to get up and dress to go see for myself if such a tremendous vital force could really be stopped so totally: all that power and humanity, it seemed to defy logic.

Within our heads, the heavy silence was full of her voice on this grey rainy day:  bulerías as only she could sing them, tientos, tangos, seguiriyas, soleá por bulería, fandangos, bone-crunching saetas, taranto, alegrías, an endless assortment of Jerez-style villancicos, Caracol zambras…

The powers that be waited too long to crown this queen with the honorific prize “Compás del Cante” she was to receive only days afterwards. Nor could she wait to be officially named “Favorite Daughter of Jerez de la Frontera”.  Not even her appointment with King Juan Carlos I to receive from his hands the Gold Medal of the Arts was enough to stop her premature disappearance.

They used to say about Manuel Torre that once you heard him live, his voice got into your ears and stayed there forever. This is what happens to me with Paquera de Jerez, her voice keeps echoing in my head fifteen years after it was forever silenced.

From May 25thto June 28th, the Provincial Federation of Peñas Flamencas of Cádiz has programmed a series of 14 recitals in memory of doña Francisca Méndez Garrido, “Paquera De Jerez”. 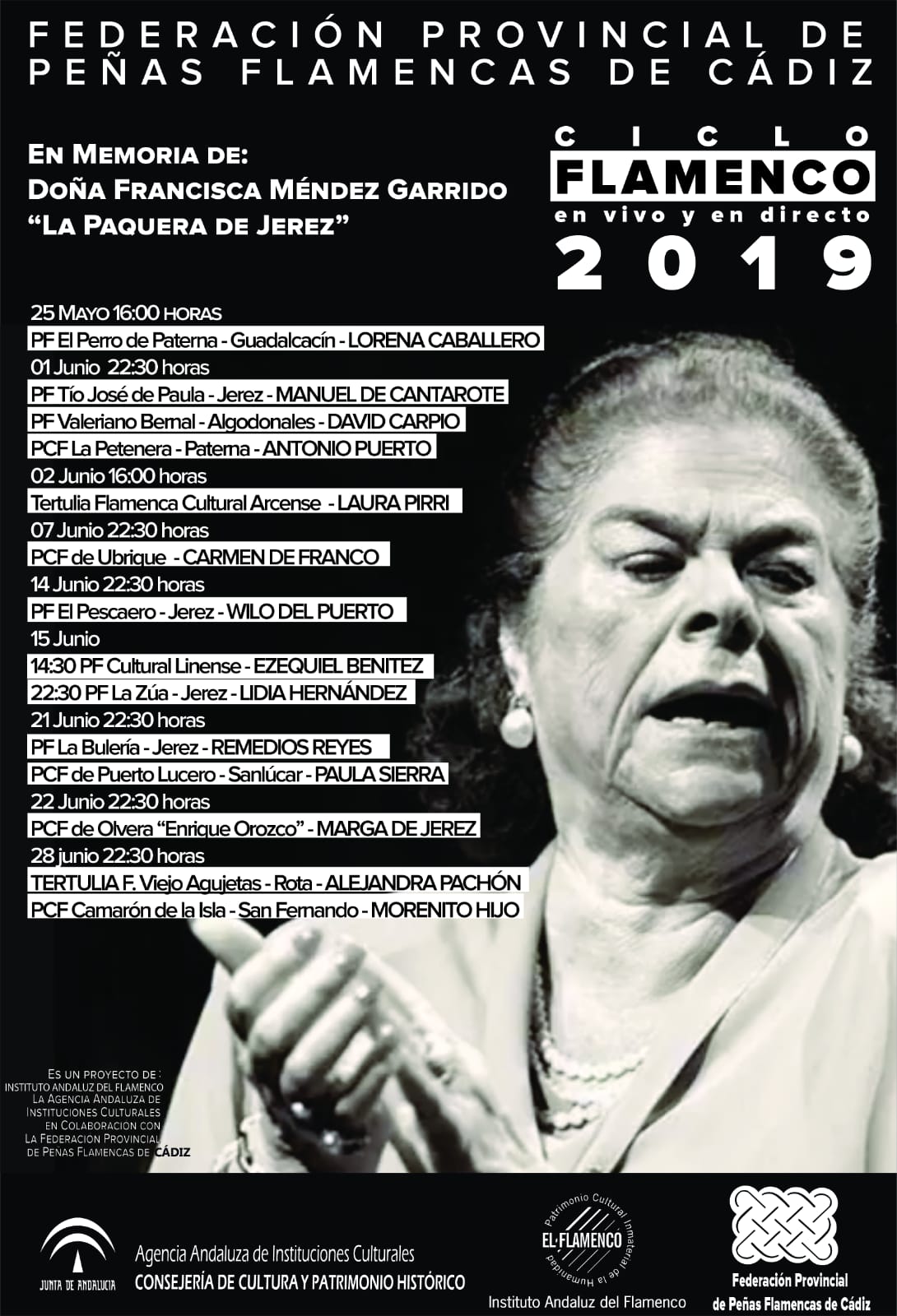