Home / Estela Flamenca  / What story do the hands tell?

What story do the hands tell?

You just finished a show. As you sink into a chair in the dressing-room shared with dancers, singers and guitarists, you look in the mirror and notice your eye makeup has melted away as admirers and well-wishers excitedly line up in the hallway to take their photo with you, perhaps have you autograph their program or tell you they have 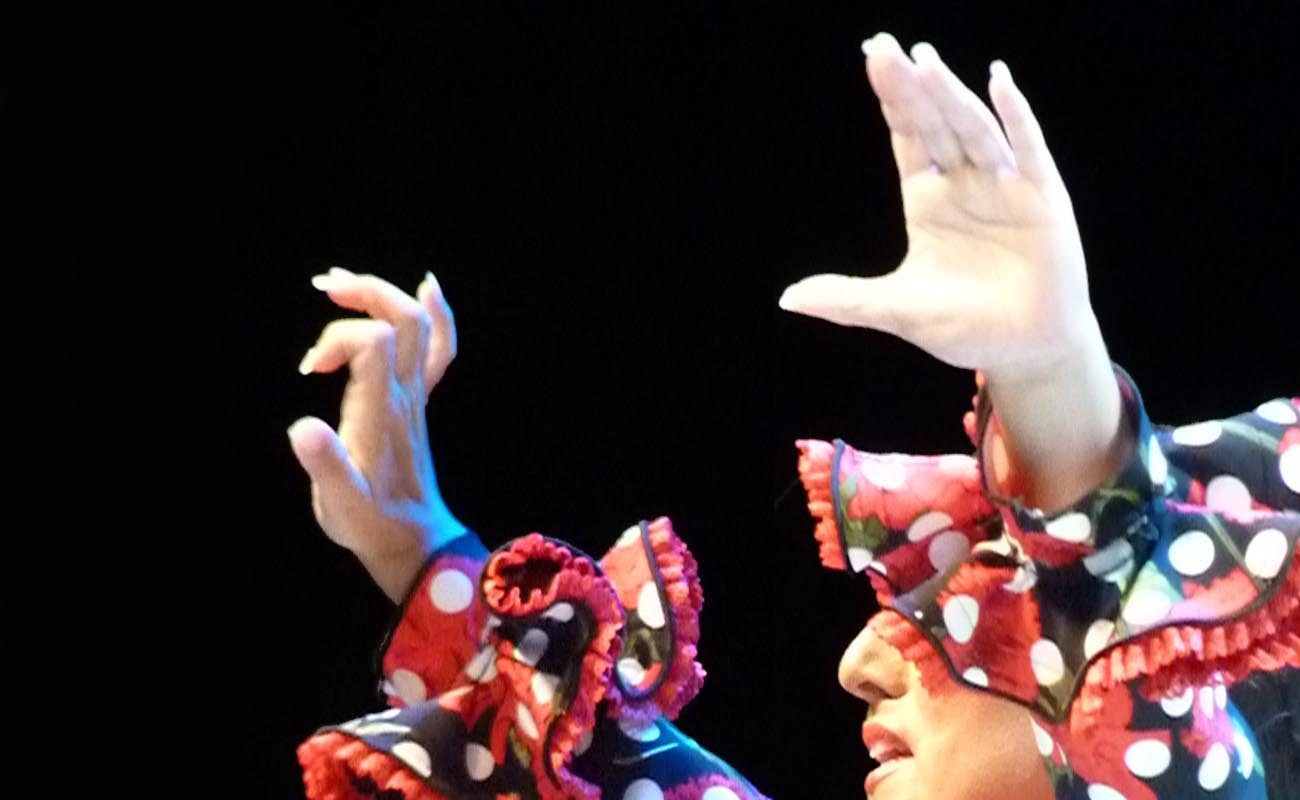 You just finished a show. As you sink into a chair in the dressing-room shared with dancers, singers and guitarists, you look in the mirror and notice your eye makeup has melted away as admirers and well-wishers excitedly line up in the hallway to take their photo with you, perhaps have you autograph their program or tell you they have a granddaughter who studies flamenco dance. You wish they had waited just five minutes until you caught your breath and rehydrated, but you don’t want to be rude to the very people who make your job possible.

Then it happens. Assuming you’re working outside Spain, someone is likely to pop the question: “I loved the show… but what story do the hands tell?”

If you clicked on this article hoping to find the answer, here it comes: the dancers’ hands tell no story whatsoever. In fact, aside from theatrical contrivances that have become so popular over the years using flamenco as a vehicle to tell a story, the choreography of traditional flamenco is abstract and has no explicit narrative (Beware of shows that require studying a convoluted libretto in order to make sense of the flamenco.  In the struggle between good theater and good flamenco, the former tends to come out on top).

What happens next is odd  The person who asked the question will usually hasten to correct you: “everyone knows the hands tell a story!”

There’s an iconic scene in the 1958 Rodgers and Hammerstein musical South Pacific in which actress France Nuyen acts out the narrative lyrics of the song Happy Talk using hand movements. That may be where people got the idea, Hollywood was notoriously culture-ignorant in those early years, and had few qualms about using incongruous references that would go on to become installed in a fanciful new reality.

The much-admired veteran dancer Luisa Triana who worked and traveled with Carmen Amaya’s company when her father choreographed and partnered the legendary Catalonian dancer, told me in private conversation that when she danced in American-made films, directors always pressured her for more intensity, more fire and foot-stomping, no matter if a scene took place around a campfire in Mexico. Nor did Rita Hayworth fall short with her seductive “flamenco” dancing in which she flirted shamelessly with cowboys. Or were they gauchos?

Everyone who’s been to my house knows I have a large poster of Fernanda de Utrera on the wall. When a British friend visited some time back and asked who she was, I answered that it was a famous flamenco singer. The friend kindly corrected me: “surely you mean flamenco dancer… there’s no such thing as a flamenco singer”.

Another old chestnut is the barefoot flamenco dancer. Images exist of authentic barefoot street urchins displaying their flamenco dance ability, not to mention La Chunga (Micaela Flores Amaya, Marseilles, 1938), who began dancing barefoot in the street, afterwards achieving great fame and turning that into her trademark. However, when sophisticated theater-goers ask if wearing shoes to dance flamenco is “authentic”, it’s a sobering reminder of how misunderstood and romanticized flamenco is among the general public. And what’s with the rose between the teeth?

But foreigners don’t have the monopoly on skewed data. More pernicious is the still-lingering belief among older undereducated Spaniards that the profession of flamenco dancer is actually a cover for the world’s oldest profession. But that’s for another article folks…