He is one of the most talented flamenco guitarists of our days. His latest album, 'Llanto de la guitarra’ (‘Weeping of the guitar’) is a very interesting musical work with the collaboration of giants such as Tomatito and Vicente Amigo. It may be one of the best albums of the year. 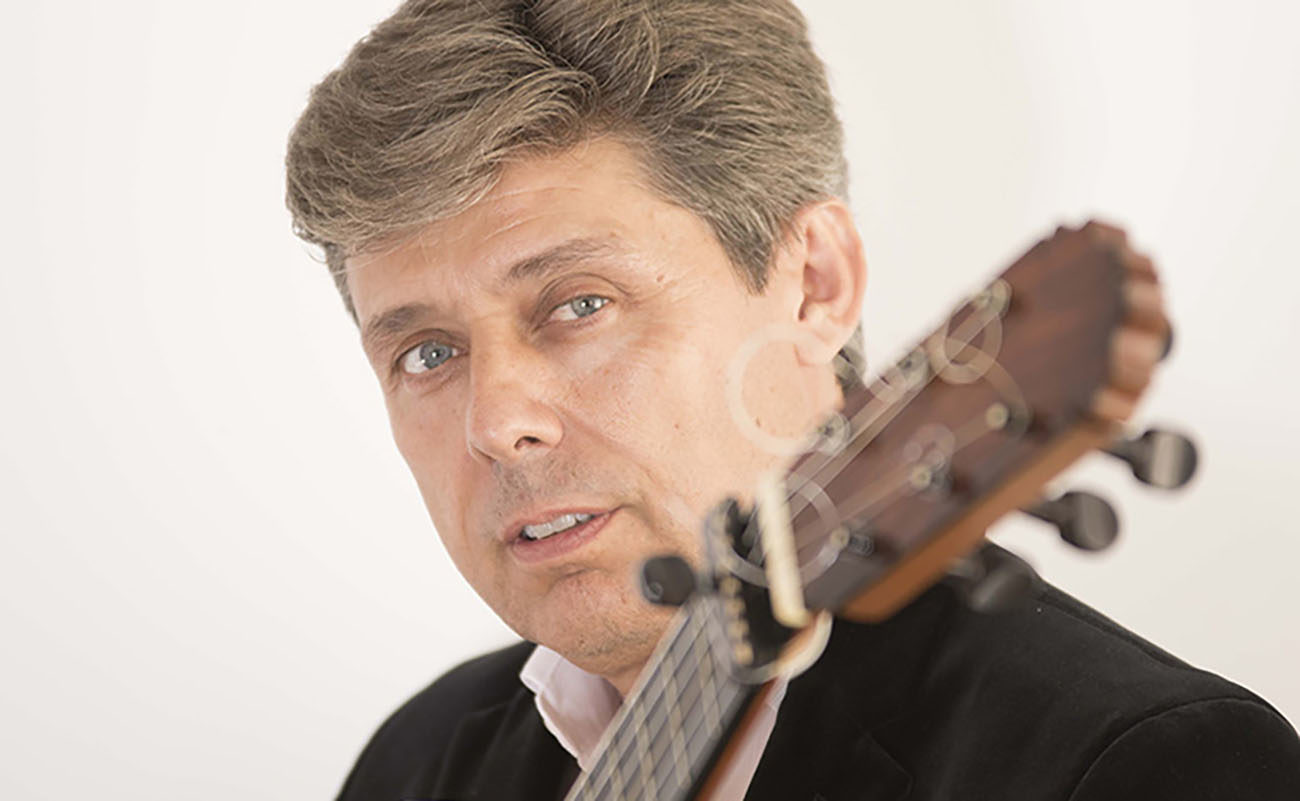 Pedro Sierra is from Barcelona, but he’s been living in Seville for decades, where he raised a family with the cantaora La Tobala. Without any doubt, he’s one of the most talented flamenco guitarists of our days, but he believes that Paco de Lucía is an unsurmountable wall. One day I say how that genius from Algeciras congratulated him in public for one of his albums, Decisión, in front of other great guitarists. He didn’t faint, just blushed. His latest album, ‘Llanto de la guitarra’ (‘Weeping of the Guitar’) is a very interesting musical work with the collaboration of giants such as Tomatito and Vicente Amigo. It may be one of the best albums of the year. Pedro is a very well-rounded artist, although he may lack ambition.

– What do you use to laugh about when talking about contemporary flamenco guitar? Or perhaps you feel like weeping, due to the little importance people give to guitarists in this country?
– I laugh about how little people know about flamenco guitar in our days. And I feel like weeping because the solo guitarists don’t have much exposure. In a certain way, it makes sense, because when cantaores or bailaores are hired, the guitarists are often included in the contracts. Yet, it shouldn’t be like that, because those of us who have squeezed our brains with musical ideas need to express them.

– Your album is wonderful. We would expect that this would translate into a tight schedule of performances this year, although I imagine you don’t have high hopes. Or maybe you do?
– Many thanks for the wonderful compliment. My schedule is what it is, and I have no complaints, although you suggest that I should be swamped with offers. Even so, I’m content with what I have.

– One day I saw how you blushed when Paco de Lucía congratulated you for one of your albums. Did you admire the genius of Algeciras that much?
–  You have a good memory Manuel, hahaha. Yes, that was when Paco de Lucía was awarded the Niña de los Peines prize in Seville. He walked straight towards me and, in front of Vicente Amigo, Tomatito and Raimundo Amador, he congratulated me for my album Decisión. I blushed more because of those around me than because of Paco’s compliment. It was obviously a moment for blushing, because all the guitarists of our generation were musically born guided by the hand of the genius of Algeciras.

– Among today’s young guitarists, who do you think could represent in the future what Paco represented in the world?
– Nowadays, no one. Paco was someone exceptional, the context, the moment. Flamenco guitar was well represented by geniuses such as Ramón Montoya, Sabicas and Niño Ricardo. Yet, Paco added freshness, new ideas, without ever getting off the rails. Today there is no need to look for a substitute of Paco. What we have to do is stay on solid foundations and understand what he projected in his early days.

«Flamenco is nowadays in uncharted territory. I think that there is so much information that the new artists get confused»

– Sell us your album. Tell us why we should buy it and how we should listen to it. I listened to it in my car and almost got off the road. Your music, from this album, moves me.
– To sell an album, the best presentation is to make people listen to it, because I worked on it building pieces with musical coherence, unifying all pieces to make a complete work which can then be performed live on stage.

– Do you think that having renowned contributors like those in your album are necessary to sell it or to make it reach thousands of aficionados?
– The collaborations in this album are timely. These are colleagues that wanted to contribute to this album. If that results in we all helping each other to reach more aficionados, then that’s great. For example, I’m a friend of Tomatito since the Bienal of 1984. Likewise with Vicente Amigo, we attended the courses of Manolo Sanlúcar in that same Bienal and we all have good memories of those days.

– What did you mean to tell, if you meant to tell anything with this new CD?
– It’s true that whenever an artist records a CD, it’s to tell something. My concept of flamenco guitar is very clear: flamenco foundations, riveting falsetas, melodies and, above all, pieces that become whole.

–You live off flamenco but, be sincere: is it a good life?
– I live off flamenco, but I’ve always thought I should not depend on the guitar. That’s why I also have my own record label, besides teaching at the Fundación Cristina Heeren since the year 2005.

– Is flamenco in bad shape, or much worse than what you’ll tell me, although you don’t want to admit it?
– Flamenco is nowadays in uncharted territory. I think that there is so much information that the new artists get confused. We must be able to take advantage of all that information and manage to digest it. Intuition is also lacking. And we must never forget the foundations from where we’re from. That’s not the same as imitating.

– What do you expect from the new government of Andalusia? If you expect anything at all, of course.
– I don’t believe in politics. The authorities must be respected, but politics have not given a solution to humanity’s problems, no matter how good intentions are.

– Do you have any dream you may be able to confess? Tell us what you would like to do with your guitar.
– I’m very satisfied with my career. Besides, guitar and flamenco are not my life priorities. The guitar is the instrument with which I earn my living, with whom I’m satisfied, because it’s a profession where you can make people feel good, while I myself feel good.

– I could ask you about Rosalía, but I won’t. You can say whatever you feel like.
– Hahahaha. If I answer that, I’m sure it will make headlines, and I don’t think that girl needs further publicity, so I’ll keep my opinion about Rosalía for myself.

– Many thanks for your patience.
– I give you thanks you for your very kind words about Pedro Sierra’s Llanto de la guitarra and my artistic career.