Flamenco and the “Madrid Scene”

Flamenco and the “Madrid Scene” The Madrid Scene (La Movida Madrileña, a countercultural movement in post-Franco Spain) influenced all art genres, particularly in flamenco, for sure. 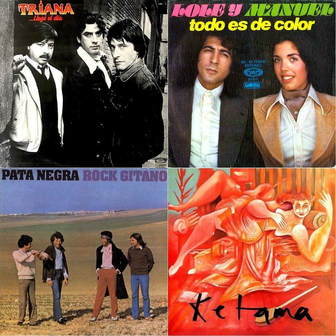 Flamenco and the “Madrid Scene” The Madrid Scene (La Movida Madrileña, a countercultural movement in post-Franco Spain) influenced all art genres, particularly in flamenco, for sure. After a long period of darkness, the doors or light and freedom became wide open and the musical trends got into the hearts of that roused youth. Triana, Lole y Manuel, Pata Negra, Lebrijano, Ketama, Camarón, Paco de Lucía and many other artists contributed in great measure to make flamenco more accessible for everyone, making it the standard bearer of this renewed emancipation, awaited for so long, after being subjected for many years to that hopeless regime, being pawed as entertainment for capricious gentlemen and stuffy aristocrats.

The National Ballets were created and consolidated, and great personalities in the history of Spanish dance and flamenco made their voices heard, loud and clear: Antonio Ruiz Soler, Antonio Gades, Cristina Hoyos, Mario Maya, Farruco, Matilde Coral, Manuela Carrasco… among many other stars of both academic, rigorous dance, and Gypsy, self-taught baile. The dance schools were teeming with daring souls. Television became the perfect showcase for all of us to reach every home, giving a beating heart to those emblematic figures of flamencos and flamencas which for so long decorated the top of our snazzy TV sets.

New horizons opened for the Spanish diaspora and many aficionados and artists were able to come back to their homeland, without fear or caution, eager to know, seek and update their memories, thus filling up the whole country with the salt of flamenco from overseas. This lead to the creation of many schools and international festivals which nowadays are essential spaces for the good health of our eternal art of flamenco dance. Here, during that splendid metamorphosis which bloomed out of necessity, the most exquisite and the most despicable controversies were forged.

It was a time of change and rupture. New generations without affiliations or uniforms, fighting in unknown, mudded battlefields. Flamenco becomes World Heritage Treasure. Unsettled times on a fallow land, eager for water, sun, wheat and fruits.