The popular peña of Jerez will host on October 18th the premiere of ‘Albariza’, the new album by José Carpio Fernández 'Mijita'. It was recorded at the tabanco of the mythical El Majuelo vineyard of Fundador Cellars.

In a December morning of the year 2018, the mythical El Majuelo vineyard in Jerez, belonging to Fundador Cellars, opened its doors to receive renowned flamenco personalities who had come to listen to the cante of José Carpio Fernández, better known by his family nickname Mijita. Luis Moneo, Rancapino Chico, Vicente Soto, Alfonso Mijita (father and son)… couldn’t miss this event. José locked himself in a small tabanco with all those friends and with the rest of the crew who would create what became the album Albariza, which will be officially presented on October 18th at Peña La Bulería, which he considers his “second home”.

Mijita has acknowledged that “behond this work there is a big effort, and I specially thank my guitarists Pepe del Morao and Domingo Rubichi, as well as the palmas of Diego Montoya, José Rubichi and Carlos Grilo”. The album is made up of eight styles, from a seguiriya and bulerías to a malagueña and fandangos, some with popular lyrics and others with lyrics written by Pepe del Morao himself, José María Castaño, José Gallardo and some which had been “kept” by Antonio Gallardo Molina (rest in peace).

This recording had the collaboration of the studio LaAzotea in Sanlúcar, as well as the participation of Cepillo in the process of edition and post-production. The label releasing this album is Flamencos Vive and the cover photograph is by Claudia Ruiz.

José has insisted in thanking the Fundador Cellars for their collaboration, as well as the peña which will host the premiere. Advance tickets are on sale for 12 euros (15 euros at the door, with a risk of selling out). Tickets can be purchased at the peña itself on Empedrada Street in Jerez’s San Miguel district, or by telephone dialing 856 053 772 or 628 632 002.

Fruit of the Albariza land

We had the honor of writing the text in the sleeve of this album, where we state:

«Jerez keeps the flavor of many centuries past and takes good care of the weight of its history, as its wines and its cantes can attest. Fruit of this ALBARIZA land, whose rich organic matter greatly exceeds most agricultural soils, are the renowned wines of the “Marco de Jerez”, infusing the locals with a character typical of these wines, open and full of sensibility. That is why these roots going back thousand of years influence the romantic aspect of cante flamenco, deeply seeking its essence and the respect for tradition. José Carpio Fernández (b. Jerez, 1982) appeals to the incorruptible truth of a live performance in the naked expression of his Gypsy voice. From the tabanco in the mythical El Majuelo vineyard of Fundador Cellars, this cantaor allows himself to be taken over by the friendly and relaxed atmosphere create by thirty-something friends, relatives, colleagues and good aficionados who came to listen to him. This is his quintessential habitat, the social gathering, the room full of flamenco lovers where the feelings of great flamenco evenings, nights and early mornings flow. His cante, soaked by the freshness of the water that once surrounded his San Miguel neighborhood and scented by the fragrance of the fields which peeked at Santiago, is the result of the nature of flamenco — not without evolution — being eager to reach that ALBARIZA which keeps all the properties of this mystery».

[Translator’s note: “Albariza” is the name of a particular type of soil very well-suited for vineyards and characteristic of the so-called “Marco de Jerez” (“Frame of Jerez”) region, which surrounds Jerez, extending as far as Lebrija and Sanlúcar to the north and Chiclana to the south] 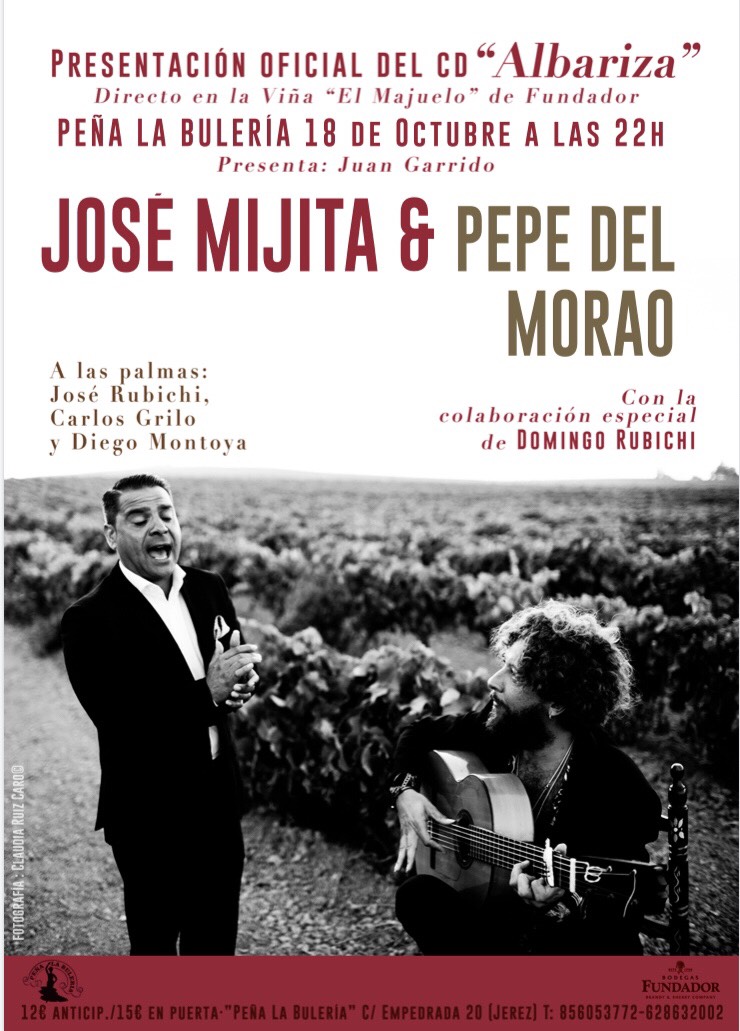