Without a doubt it’s the best album of ‘cante jondo’ in history. Listening to it is getting to know flamenco in style.

In 1967, book collector José Blas Vega (Madrid, 1942 – 2012) was hired by the Hispavox record label to be in charge of the folklore department, a position he held until 1983. In short, he was to become Hispavox’s executive producer of flamenco albums. His first project was based on a brilliant and risky idea, with the goal of capturing duende in vinyl microgroove, to be enjoyed for one hundred generations. The title captures the essence of authenticity in two words: Canta Jerez (“Jerez Sings”)

It was the golden age of Madrid’s tablaos. To the traditional Villa Rosa and Los Gabrieles were added, in the 1950s and 1970s, the mythical Zambra, El Corral de la Morería, Las Brujas, El Duende, Torres Bermejas… And, above all, Los Canasteros, opened by Manolo Caracol in 1963. In those days, almost all renowned flamencos artists lived in Madrid, flamenco’s Mecca, and there is where Blas Vega sought the performers for his album. All of them were from Jerez’s Santiago district, more specifically from a handful of streets where cante flamenco had acquired a local, familiar character: Nueva Street, Marqués de Cádiz street, Cantarería street.

The cast was part of an inimitable generation of Gypsy cantaores from the golden age of cante in Jerez de la Frontera: Manuel Soto Sordera, Manuel Valencia El Diamante Negro, El Sernita de Jerez, Tío Borrico, Romerito de Jerez and Fernando Terremoto. All of them lived in Madrid, except Tío Borrico. For whatever reason, the first pick as guitarist, Manuel Morao, was dropped from the lineup. This wasn’t a major setback, though, since in Madrid there were several other first-rate tocaores who were used to accompany all of these cantaores in tablaos, such as Paco Cepero, also from Jerez — although from the rival district of San Miguel — and Paco de Antequera, from Málaga.

The idea was simple but also brilliant: gathering all of them at the Hispavox studio in Madrid at 11 AM and let them feast on ham and Tío Pepe sherry. No one had the obligation to sing, and they would only do so when they felt like it, on open mic. On one side of the studio there was a large table with plenty of food and drink, on the other, a wooden floor ready for baile. That’s how an authentic gathering of cante took place, where harmony and laughter soon gave way to singing.

Among the eleven tracks of this album, there are two veritable jewels. One is a fiesta por bulerías, where the soniquete of the two guitars feeds on the palmas and jaleos of all cantaores, who sing in the same tune. The other is a couple of cabales, veritable masterpieces, masterfully performed by El Sernita de Jerez: the cabal of Silverio and the cabal of Loco Mateo:

[From Porverita
To Santiago
The sorrows of death, oh
Mother, have surrounded me]

There are three seguiriyas, each better than the next, performed by El Sordera, El Diamante Negro and Terremoto. The soleares are to die for, with Tío Borrico making a musical tour from Alcalá to Cádiz and from Cádiz to Jerez. Then there are the fandangos de El Gloria, sung by El Sordera. The bulerías por soleá and the Nochebuena (Christmas songs) por bulerías were performed by Terremoto and Romerito de Jerez, respectively. The vinyl is completed with magnificent soleares de Juaniquí, brought to life by Romerito, and the martinetes of Manuel Valencia.

In 1987, on occasion of the twenty years of its first edition, Hispaxox re-edited a vinyl version of Canta Jerez. This time Pepe Marín was in charge of writing the sleeve text, replacing the original by Blas Vega. Marín once again wrote a new text in the year 2000, for a CD edition of this album made by Jerez City Council and the Federación Local de Peñas Flamencas .

The wonderful book Sernita de Jerez, ¡Vamos a acordarnos!, by José Manuel Gamboa, compiles the answers of several cantaores and cantaoras when asked which, in their opinion, is the best flamenco album of all time:

El Torta: Canta Jerez, with Terremoto, Borrico, Sordera… What I like the best are the cabales del Serna, by Sernita de Jerez. They are inimitable, unique. They can be sung in a worse way, but never better, never as good as that.

Capullo de Jerez: In my opinion the best [flamenco] album ever recorded has been Canta Jerez. It features very good artists, with a lot of soniquete, and the jaleos come out so naturally. No computers involved!

José Mercé: Whenever people ask me to recommend a flamenco album, I always answer “Canta Jerez”. It’s a way to get to know flamenco in style. 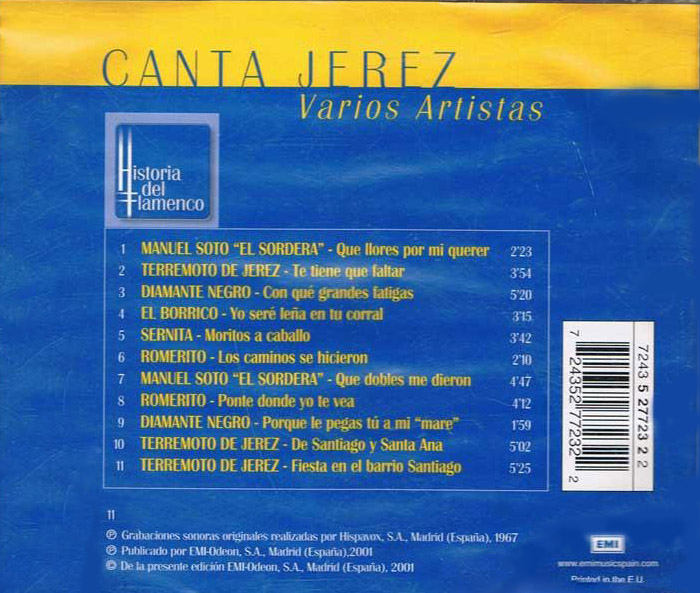