The peñas flamencas of Madrid have played an essential role in the last few decades. 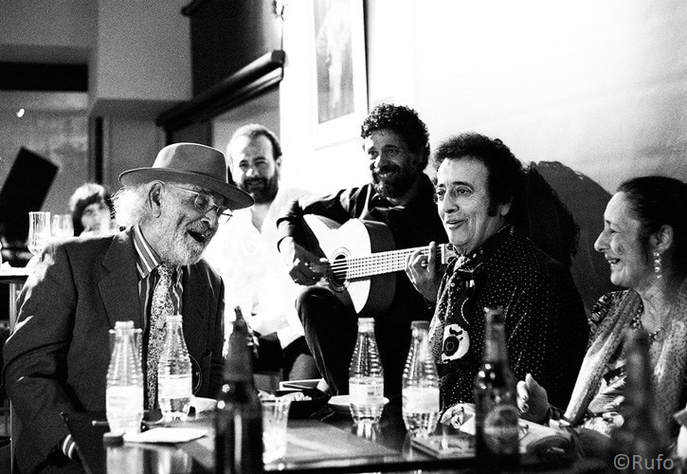 The peñas flamencas of Madrid have played an essential role in the last few decades. I’d like to highlight some names such as the venerable Peña Charlot (a place of fruitful gatherings where Pepe de la Matrona, José Blas Vega, Enrique Morente, Carmen Linares and many others would socialize); Fosforito, Los Cabales or the beloved Chaquetón (where in the 80s and 90s we were able to enjoy, face to face, the cante of Manuel Sordera, Paco Toronjo, María Vargas, El Torta, José Mercé, Gabriel Moreno, Canela de San Roque, El Mono, Chano Lobato, etc.). Nowadays, there are a few left, such as Peña Duende, El Mami or Paco del Pozo.

Evidently, lifestyles and, by extension, flamenco itself, have changed radically through the years. Thus, in the summer of 2013 a group of aficionados decided to undertake a flamenco association project to bring about different initiatives which at that time were hard to find in Madrid.

Our activities have two essential pillars. First, live flamenco: we bring in both the main stars of contemporary cante and the most acclaimed young cantaores, without forgetting those cantaores who, for different reasons, seldom perform in public events, having always quality as the only goal. Baile and concert guitar also have their space in our programming. The other block is made of activities which we consider necessary to better understand our music: presentation of books or albums, conferences, debates, tributes, etc.

The “third leg” of our cante concerts have been of those artists who don’t perform in big events as much as we’d like to, if at all. That’s the case of Inés Bacán, La Kaíta, Diego el Cabrillero, Enrique Soto, Antonio Agujetas, Márquez el Zapatero, Luis Moneo, Morenito de Íllora, Dolores Agujetas, Cancanilla de Málaga or Mari Peña.

Concerts of flamenco guitar seldom feature in these types of venues. Yet, that’s not our case, as we have featured performances by stars with the stature of Víctor Monge ‘Serranito’, Rafael Riqueni, Paco del Gastor, Diego de Morón, Diego del Morao, Alfredo Lagos or Dani de Morón, among many others.

We conceive baile as an artistic expression closely associated by the emotion produced by cante, and not so much as a dance discipline where the voice is just a tool which appears, disappears, stretches or shortens according to the needs of the dancer. Going against the flow, we have enjoyed performances by Carmen Ledesma, Pepe Torres, Javier Heredia and José Pañero, and Diego de la Margara. We would like to develop and expand the presence of baile in our programming.

The icing on the cake, on top of all these concerts, are our albums, produced under the title Directos en el Círculo Flamenco de Madrid (“Live at the Círculo Flamenco de Madrid”). Up to now, we have released two of these: one featuring Antonio Reyes and Diego del Morao in 2015, and the other featuring Tomasa La Macanita in 2016. Both albums were nominated for the Latin Grammy Awards. We are working an a third one.

As I said earlier, the other pillar in our programming is all the activities which help to understand flamenco in greater depth, from very different angles. Naturally, our music can be enjoyed just out of simple curiosity, but when aficionados understand flamenco better, they’re able to perceive a wider range of nuances, and that definitely makes it more enjoyable.

Among these complementary activities stand out the meetings with artists who are no longer performing, or who never had a public career. That is the case of Antonio el Rubio, Antonio el Álvarez, El Güito or Luisa Triana. The cantes performed by the two first artists are still reverberating in out minds, as well as all of their testimonies.

We consider the teaching of flamenco as something essential, so we have promoted master classes by some of our most renowned guitarists: Manuel Parrilla, Diego del Morao o Dani de Morón.

Our intense activity is promoted by the wonderful posters of María Artigas, a novelty regarding flamenco information, avoiding clichés and exploring new expressive options.

All this audiovisual material doesn’t just disappear: we record and store it in a special box each year (not for sale), giving one each for our members, as well as for the Spanish National Library and for the Andalusian Center of Flamenco Archives.

To wrap it up, I have to say that from the beginning we were faced with many difficulties. Standing up for a flamenco taste like ours, from Madrid, is not easy. We are located away from the natural flamenco centers (let’s not forget that flamenco artists no longer settle in Madrid as in former times, and many who did so have now returned to their hometowns), and that adds up to our expenses. As we live in a big city, it’s harder to get in touch with our public representatives: in Andalusia, many peñas operate from venues handed over by their municipalities, yet in Madrid that would be unthinkable. Another problem is that, with so many options to enjoy flamenco in the Spanish capital, less seasoned aficionados don’t feel the need to join an association like ours. I could go on listing other hurdles, but this project –collective and distinct – demands our attention. We shall keep working on it!