How is it possible that the true origins and profound influence of the Spanish guitar, this country’s gift to the world of music and the instrument that took the 19th century by storm, is still relatively unknown?

It is not fair that the main contribution of Spain to the world of music remains virtually unacknowledged around the globe. It is also annoying that the exceptional influence of this Spanish instrument in the world’s popular music is virtually ignored in its birthplace. How would the Beatles have fared if George and John had never played the Spanish guitar? Would Hendrix, Steve Howe, Jimmy Page, Ritchie Blackmore, Joe Pass or Bob Dylan have succeeded in their musical careers if they had never touched a Spanish guitar? Electric or not, with either nylon or metal strings, but always Spanish, that is, tuned as mi-ti-so-re-la-mi.

All the evolution experienced by this instrument and all its influence in the most diverse cultures since the 18th century — when a sixth string was added to the five-string guitar — apparently are not enough to make it a matter of pride in a country that often needs a boost to its self-esteem, because we cannot rely on Rafael Nadal forever. I think the government should gift every newborn in this country a Spanish guitar (plus one Pata Negra ham and telera bread).

«How would the Beatles have fared if George and John had never played the Spanish guitar? Would Hendrix, Steve Howe, Jimmy Page, Ritchie Blackmore, Joe Pass or Bob Dylan have succeeded in their musical careers if they had never touched a Spanish guitar? Electric or not, with either nylon or metal strings, but always Spanish, that is, tuned as mi-ti-so-re-la-mi.»

I have always found peculiar that many of the hard-cover books about guitars in the big bookstores, with titles such as The Book of the Guitar, feature in their covers a Gibson Les Paul or a Fender Stratocaster, but never a Ramírez, not to mention a Conde Hermanos. Moreover, browsing some of these books, I have noticed that some don’t even have one single image of a Spanish guitar. They feature all kinds of electric guitars, the so-called Californian acoustic guitars, and even guitars from other countries, all of them stemming from the Spanish one, yet the mother of all guitars is nowhere to be seen. As for the flamenco guitar, as you can imagine, not a chance.

Something similar happens with those other books with titles such as 10,000 Guitar Chords, where no matter how carefully you look, you will never find the chords of the taranta, or the granaína, not to mention the minera o the rondeña. The sustained Re? never ever. This is a perfect example of how our own music has fallen into oblivion. How harsh flamenco is punished, compared with other genres of Spanish music. In a recent controversy regarding the supposed injustice committed by TVE against the Taxungueiras, a Galician folk group, regarding the Eurovision music contest, I read in the social networks how people blasted this TV network, stating that it always gave priority to flamenco, always flamenco. I can only wonder, what TV programs do these people watch? Maybe it was the new flamenco show anchored by Miguel and Soleá what gave them an excuse to attack the Spanish music genre with the greatest international acceptance.

I am surprised to read how part of Spanish society complains about flamenco at every opportunity, as if flamenco had been played nonstop for the last forty years, when the opposite is true. Of the 3 national public radio stations, RNE3 is saturated with pop music, RNE2 has one flamenco program, the one hosted by José María Velázquez, and RNE1 doesn’t feature flamenco at all. Flamenco barely features anywhere, yet the moment it shows up, hundreds of thousands of people complain how they are sick of it. It is insane.

Resuming the topic of this article, How is it possible that the true origins and profound influence of the Spanish guitar, this country’s gift to the world of music and the instrument that took the 19th century by storm, is still relatively unknown?

«Part of Spanish society complains about flamenco at every opportunity, as if flamenco had been played nonstop for the last forty years, when the opposite is true»

The guitar is a harmonic instrument, that is, it can produce multiple sounds simultaneously, six to be precise, one for each string, so chords can be made, as it is the case with the piano, the organ or the clave. Yet, unlike those three, the guitar is portable. That is the greatest advantage of the guitar: it can be easily transported everywhere by one person, unlike a piano, not to mention an organ. This feature is the key to the success of this Spanish instrument, also resulting in its popularization around the world, particularly in the American continent, filling with music the north, center and south of the New World, where it was in turn modified in multiple models of three, four, five, six and even ten strings. In the American continent the guitar had many sons, cousins, nephews, grandsons and great-grandsons. That was the source of the guitar industry developed in Cadiz.

In a small research I did many years ago in the 19th-century North American press, seeking information precisely about Spanish guitars, I found many references, and two in particular, from 1855 and 1856 respectively, caught my attention, regarding the text in the adverts:

“The Spanish Guitar is becoming more and more to be used by those who have good voices, and wish for the best accompaniment for it that there is in the world, for there is nothing so sweet and elegant as a rich, full voice with the guitar. We have just received a good stock, ranging from 3 50 to 25 dollars, at ADAM’s Book and Music Store ”. “A few years ago it was quite a novelty to hear a Lady or Gentleman play the guitar, but the popularity of the instrument has so greatly increased, that there is now scarcely a family of any musical pretension, but at least one of its members number among their accomplishments that of playing the guitar”. (Western Reserve Chronicle October 8th, 1856 and January 3rd, 1855)

In that year 350 guitars were shipped to Warren, Ohio, a small city midway between New York and Chicago, retailing for $23 each. If they were so many on sale in this small town at such early date, we can only wonder how many were sold in the major American cities. Nobody knows! 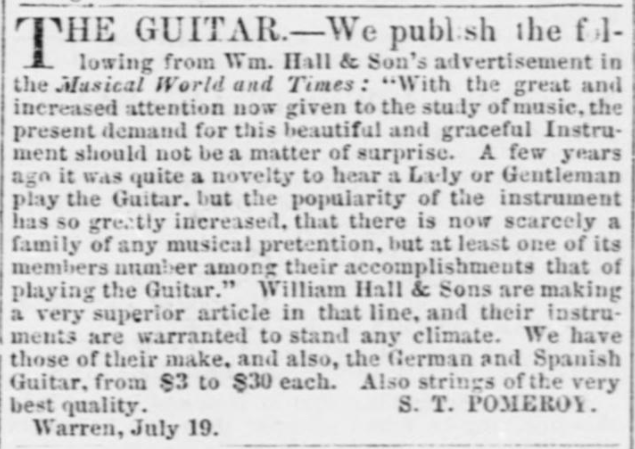 1855 Western Reserve chronicle and weekly transcript of the times January 03, 1855