Among the several activities, the Reading of the Flamenco Manifiesto by José María Velázquez Gaztelu and the awarding of a prize to Antonio Benítez Manosalbas for his work in behalf of flamenco stand out. 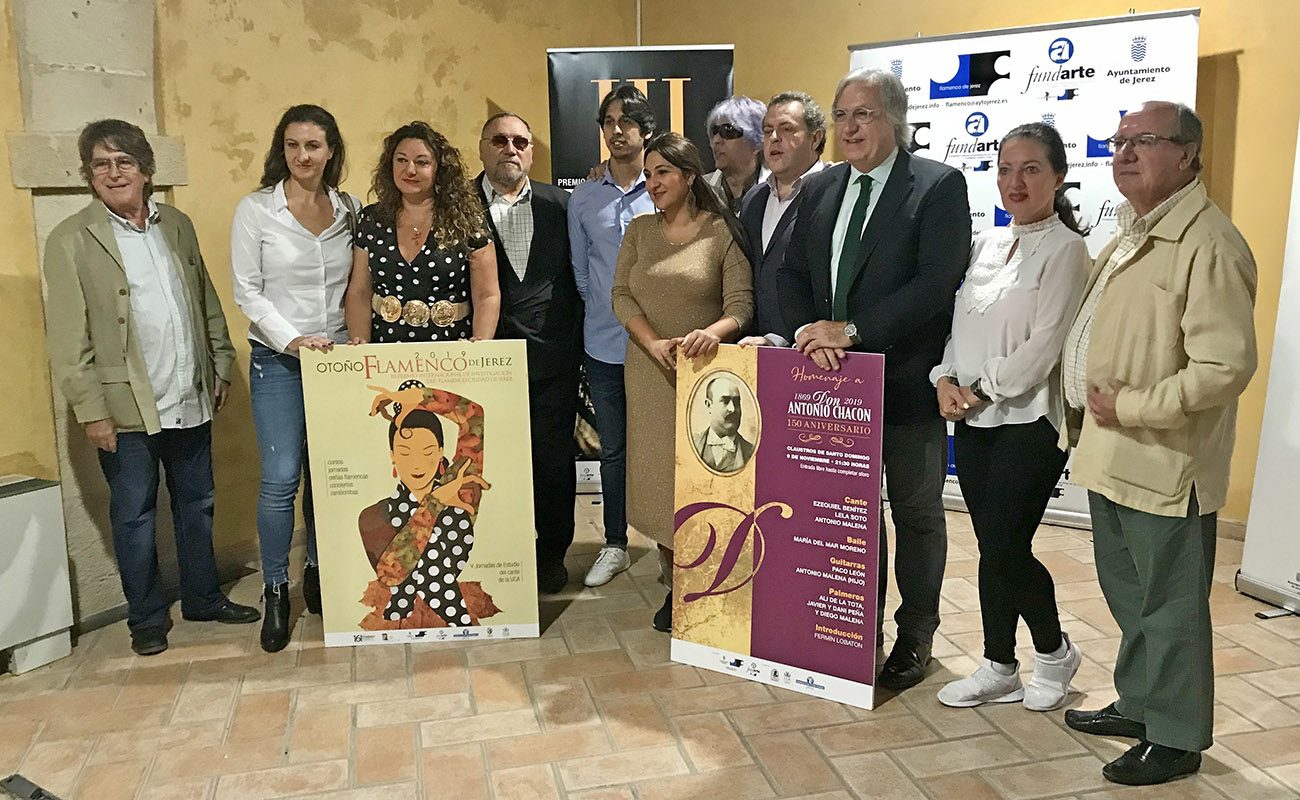 In the morning of Tuesday, October 29th, Jerez’s City Council unveiled the program organized for its Otoño Flamenco (“Flamenco Autumn”) program. It’s true that some of the activities have already taken place in the current month, «but due to technical issues, the press conference was delayed». To the numerous recitals organized by the peñas flamencas of this city — many of them already reported in this website — and the several performances hosted every day by tabancos, we have to add several dates of special interest, such as November 9th, when a great show honoring Don Antonio Chacón will take place, celebrating the 150th anniversary of his birth.

This concert will be the epilogue of the 5th Sessions of Study of Cante (V Jornadas de Estudio del Cante) organized by the University of Cádiz and the City Council itself, which will be held on November 8th and November 9th and are dedicated to that illustrious cantaor from Jerez’s San Miguel district. These sessions will take place at the city’s Museo Arqueológico and will be moderated by our colleague José María Castaño.

The concert itself will feature Antonio Malena, Ezequiel Benítez and Lela Soto, and will have the collaboration of bailaora María del Mar Moreno and the guitars of Paco León and Antonio Malena (Jr.). Palmas will be performed by Dani and Javi Peña, Ali de la Tota and Diego Malena. This act will be presented by Fermín Lobatón. It’s important to highlight the participation of the Centro Cultural Flamenco Don Antonio Chacón in this event, which fully committed all its efforts to commemorate the important anniversary of its namesake. In the press conference. Antonio Malena stated that «we’ll focus on the repertoire of this master, honoring his legacy, although I can say this won’t be easy». The concert will take place at the Claustros de Santo Domingo venue at 9:30 PM. Admission is free.

On November 13th, the 2nd ‘Ciudad, Patrimonio Flamenco de Jerez’ will take place. This is a series of conferences and round tables moderated by Juan Salido Freyre where different points of view about the current state of flamenco in the city will be discussed. This event will take place at the Palacio de Villapanés at 6 PM. Two days later, on Friday, November 15th, the 3rd Prize of Flamenco Research ‘City of Jerez’ will be awarded at the Williams & Humbert Cellars, at 8 PM. On Saturday, November 16th, International Day of Flamenco, the Reading of the Flamenco Manifesto will be done by José María Velázquez Gaztelu at the Alcázar de Jerez at 11:30 AM. Afterwards, Antonio Benítez Manosalbas, founder of Peña Los Cernícalos (50 years ago), will be awarded the 1st Premio a la Afición for his extensive work in behalf of flamenco. At noon, Jerez will enjoy moments of popular participation with different flashmobs performed at the squares in the city center, organized by the academies of María José Franco, Macarena de Jerez and Marián Jiménez.

December will feature the traditional zambombas which are in increasing demand year after year by people from all over Spain. On December 14th, starting at 2 PM, the 5th Zambomba Commemorating the Declaration of Flamenco as Intangible Cultural Heritage will be held at the Museos de la Atalaya.