Home / Actualidad flamenca  / Flamenco autumn in the peñas of Jerez

Flamenco autumn in the peñas of Jerez

The programs of Peña Los Cernícalos, the Fernando Terremoto ACF and the Tertulia Flamenca Pepe Alconchel attest that there is plenty of flamenco this autumn in Jerez 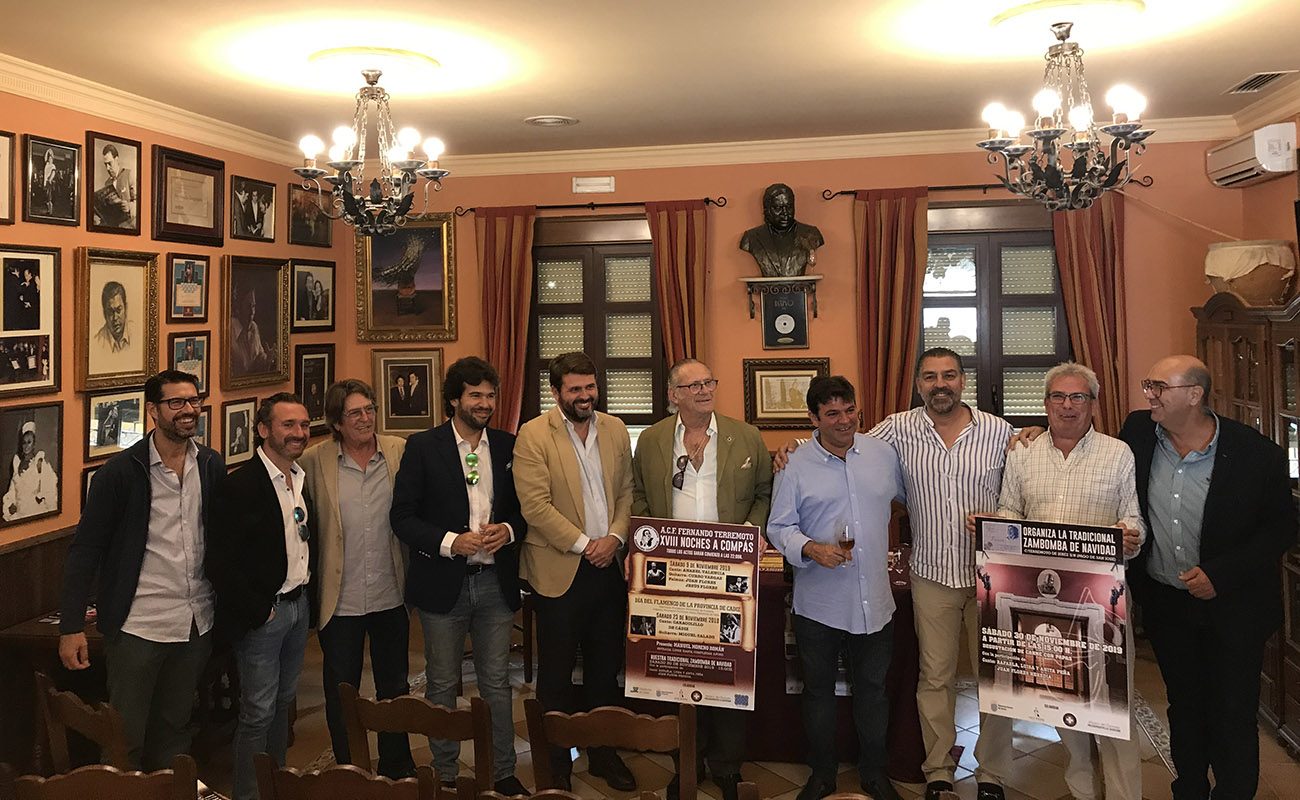 No one can say that there is no flamenco this autumn in Jerez. Nothing could be further from the true. We had already mentioned in our website the programs of Peña Tío José de Paula and Peña Buena Gente, as well as other private projects such as the (now cancelled) concert of Rancapino Chico or the greatly successful presentation of José Mijita‘s album Albariza at Peña La Bulería, and now we can add the programs revealed by other entities such as the veteran Peña Los Cernícalos, in Jerez’s San Miguel district, and the Fernando Terremoto ACF (“Asociación Cultural Flamenca”), as well as Tertulia Flamenca Pepe Alconchel. Still pending are the programs of Peña El Pescaero and the name of the artist who will deliver the Exaltación de la Bulería organized by this peña each November

The fact is that, in the midst of celebrating the 50th anniversary of its foundation, Los Cernícalos is planning to hold three recitals in November, clearly focusing on young artists. This series will start on November 9th, at 9:30 PM, with the cante of Momo Moneo, who will be joined by the guitar of Juan Diego Mateos and the palmas of José Rubichi and Manuel de Cantarote. Momo is nephew of Manuel, Juan and Luis Moneo, and was born and raised in the Plazuela district of Jerez, so he stated being «eager to come back to the place where I performed for the first time». The next session will take place on November 15 and will feature Samuel Serrano, cantaor from Chipiona, who will be joined by Paco León on the guitar and José Rubichi and José Peña in palmas. There is no doubt that the recital of this young cantaor has created great expectation, because Samuel is at a great moment in his career after the extended tour promoting his album Dos Caminos, sponsored by Paco Cepero. Finally, the female component of this series will be Lela Soto ‘Sordera’, who expressed to be extremely grateful for the opportunity to perform in this peña with «such a long and venerable tradition». Her recital will take place on November 23rd at 3:30 PM, with Antonio Malena Hijo on the guitar and the palmas of Markito Carpio and El Pirulo. This performance is sponsored by Cádiz’s Provincial Federation of Peñas.

On its part, the Asociación Cultural Flamenca Fernando Terremoto, in Jerez’s Pago de San José district, is also planning to hold two recitals in November, as well as its traditional zambomba. The 18th Noches a Compás will feature cantaora Anabel Valencia, from Lebrija, and cantaor Caracolillo de Cádiz. Both concerts will start at 10 PM, with free admission. The first performance will be Anabel’s, on November 9th, when she will be accompanied by the guitar of Curro Vargas and the palmas of Juan and Jesús Flores. Caracolillo’s turn will be on Saturday, November 23rd, thanks to the collaboration of Cádiz’s Provincial Federation of Peñas, with Miguel Salado on the guitar. The zambomba will take place on November 30th, at noon, with the participation of Rafaela, Luisa and Anita Peña, and Juan Flores Heredia. This entity also announced that soon they’ll hold a news conference to explain the details about the zambomba that will take place on November 7th at the Villlamarta Theater, an event that is already sold-out.

Last but not least, Tertulia Flamenca Pepe Alconchel (#2 Castaño Street) will feature two cantaores whose renown in flamenco continues to grow: Juan Lara and Manuel Borrico. Each will offer a recital as part of the 23rd Flamenco Series of this peña in Jerez, which is also organizing a zambomba that will take place on December 14th at 9 PM. Juan Lara, from La Plazuela district, will perform on Saturday, October 26th, accompanied by the guitar of Antonio Jero, while Borrico, from the Santiago district, will perform on November 16th, joined by the guitar of Manuel Heredia. The admission to those two recitals, starting at 10 PM, is free until the venue is filled to capacity. 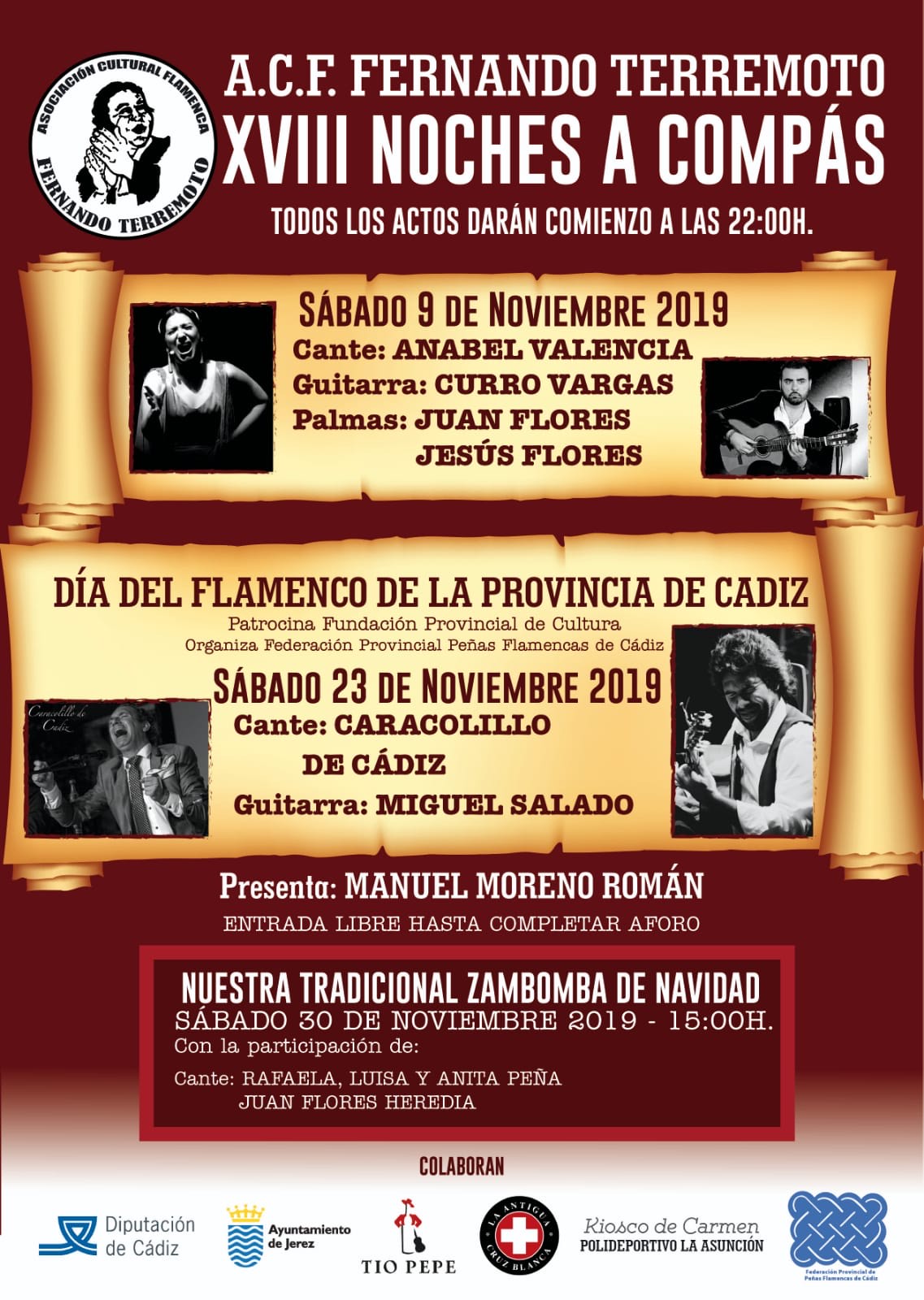 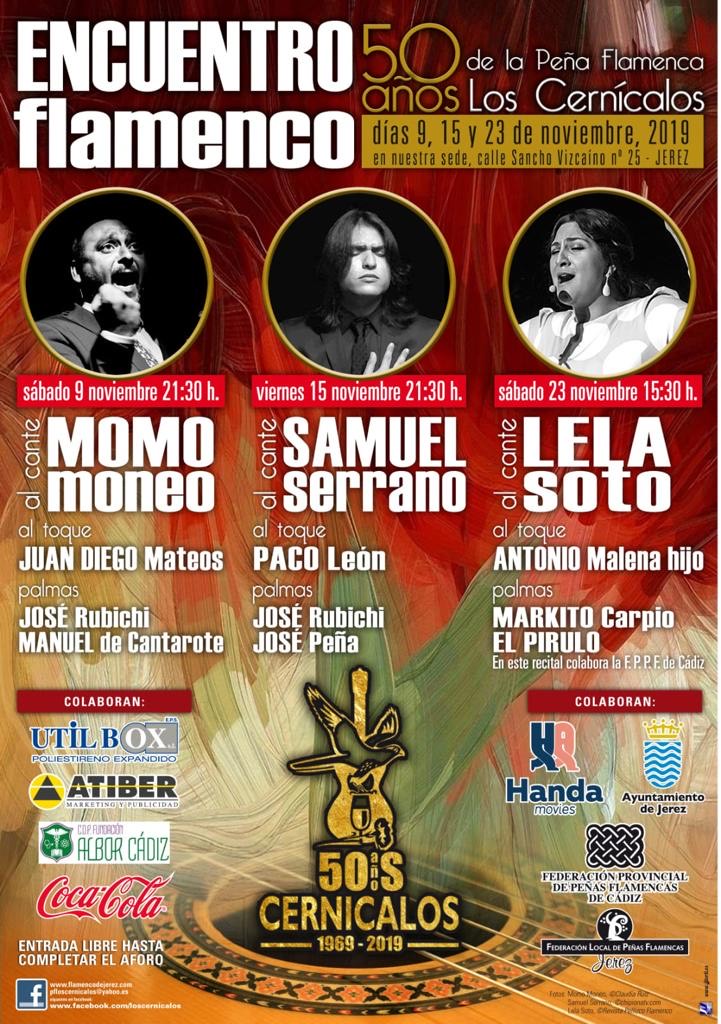 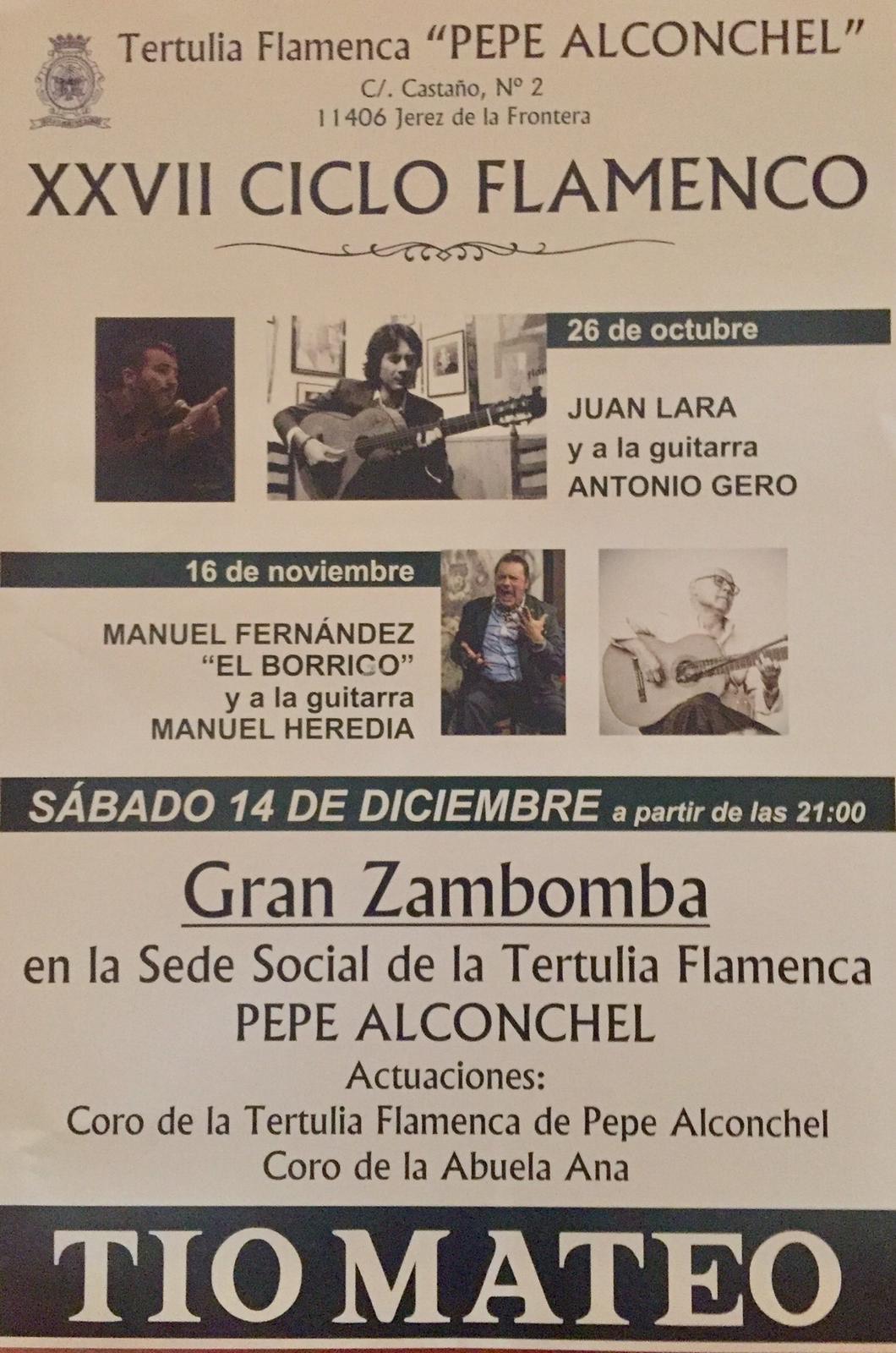