In the mid 1950s, few Gypsy families slept in the labourer’s farmhouses of the country estates. Most of them had their own places, mostly rented. Tenements (known as “casas de vecinos”, literally “houses of neighbors”) were very popular, having always a sizable inner yard and a small place to live.In the flower beds of those old tenements, peppermint and rosemary 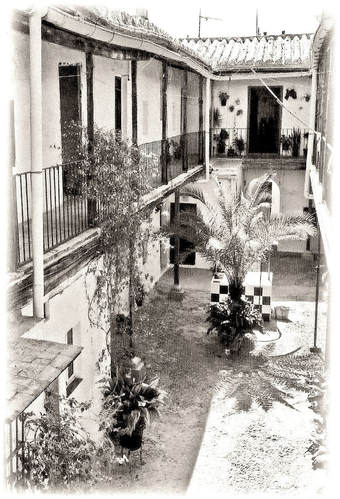 In the mid 1950s, few Gypsy families slept in the labourer’s farmhouses of the country estates. Most of them had their own places, mostly rented. Tenements (known as “casas de vecinos”, literally “houses of neighbors”) were very popular, having always a sizable inner yard and a small place to live.

In the flower beds of those old tenements, peppermint and rosemary were plentiful, as these were the favored aromatic plants of Jerez’s Gypsies, together with jasmine, as it was deemed important that houses had a pleasant scent. The strong smell and flavor of rosemary caused this herb to be used sparingly when cooking, except in the case of lamb, when it was used to supress its strong and pungent smell (“chero”), and even so it was removed soon after the cooking started.

The interaction among the families in these casas de vecinos was similar to that of the farmhouses, although in the tenements each family had their own place to eat and sleep. However, cooking was still communal, as there was one single coal kitchen for the whole tenement, with the pots of each family gleaming in the fire, one next to the other, competing to be the one exuding the best smells.

Some Gypsy women became famous in their neighborhood for their talent with the stoves. Such was the case of Manuela Jiménez Jiménez Tía Maora, who was considered the best cook in all of Jerez at the time. She learned her trade from another great cook, her mother Salvadora Jiménez Soto Tía La Mini. Tía Maora cooked “to go”, like we would say nowadays. She would also set up a tent at the fair where her “poor people” stews would be in high demand by Jerez’s elite: famous artists and bullfighters of those days, such as Manolo Caracol and the master Antonio Ordóñez. Among her specialties, people could savor guiso de menudo (tripe stew), retorteros (calf tonsils), morros (calf snout) and potaje con pringá (vegetable stew with pork and sausages). These dishes were very inexpensive, but quite laborious.

There were other Gypsy women who also cooked “to go”, such as Josefa Romero Jiménez Tía Pepa la Cola, who passed down her experience and recipes to my maternal grandmother. My mother, when she was still a young girl, would help Tía Pepa washing pots and pans. Another woman who cooked “to go” was Manuela Vargas Romero Tía la Morena de Cola, daughter of Tía Pepa Ia Cola. Tía La Mini (mother of Tía Maora) died when she was 100 years old, thirty years ago. Popa Chopo was the patriarch of this family and he died when he was 101 or 102 years old. In the case of this family, how far back in time would this gastronomic tradition go? Tía Maora’s recipes are still being used. That’s the case, for example, of Ramona Pantoja Carpio Tía Ramona, wife of Manuel Moreno Jiménez Tío Manuel Morao, son of Tía Maora.

Women like these were the ones who, without trying, taught the others and, without even noticing, created a gastronomy school in the communal kitchens of the casas de vecinos, as it formerly happened in the farmhouses. With few resources, the would cook dishes full of flavor, prepared and ready for the most demanding palates.