What happened to good taste in flamenco posters?

Organizing my collection of historical flamenco posters made me think about how graphic design has evolved, particularly when it comes to the town’s summer festivals. 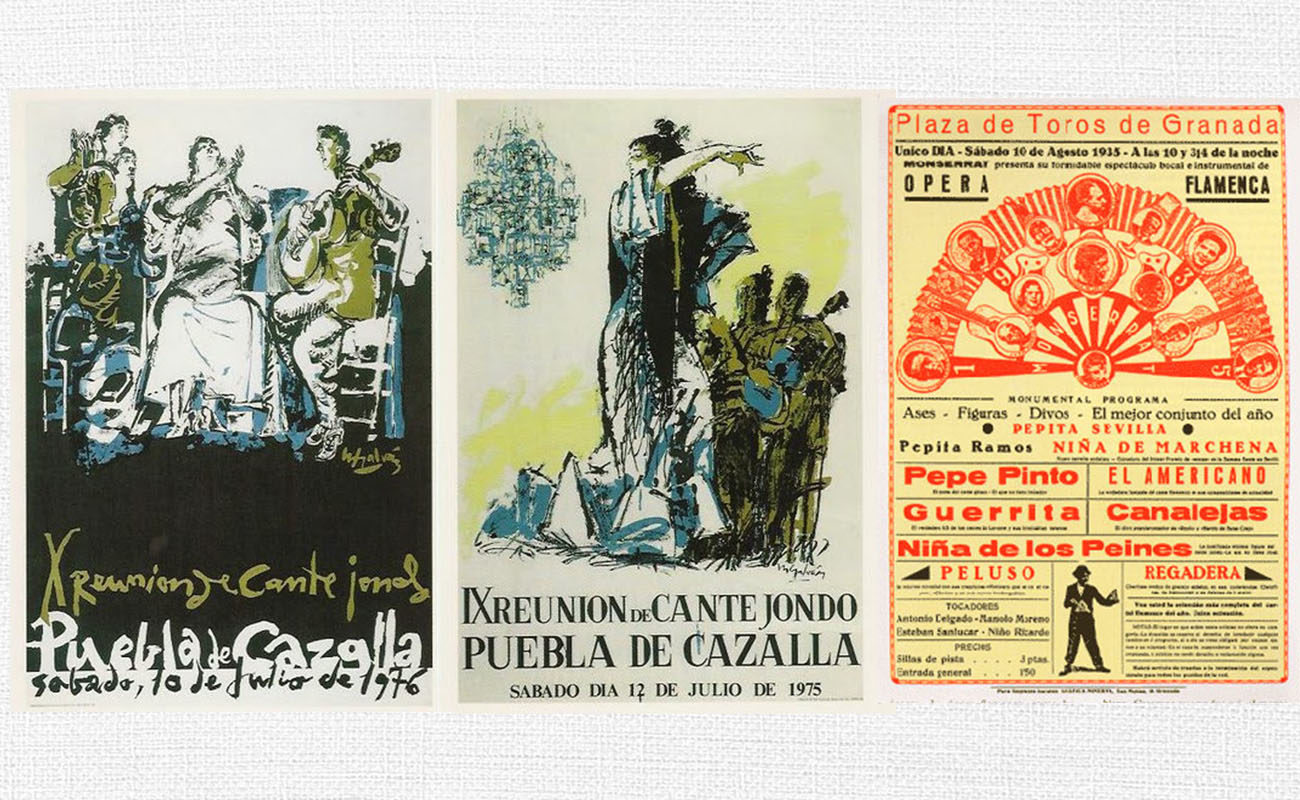 Organizing my collection of historical flamenco posters made me think about how graphic design has evolved, particularly when it comes to the town’s summer festivals. Some posters from the 1960s should be at the Fine Arts Museum in Seville, because they’re masterpieces by renowned Andalusian painters such as Francisco Moreno Galván and Juan Valdés. I also remember the posters by Luis Suárez Ávila, which now are highly prized by collectors.

In those days, people would get the posters in the mail (at home or at the office) inside a cylindrical cardboard container, to prevent creases. Nowadays they are not even sent, but just published in social networks on the internet. Besides, some of them don’t even look like flamenco posters, but rather seem like ads for a pizzeria or for a dollar store, just like those flyers that fill our mailboxes and are then quickly thrown in the garbage.

We no longer have those posters with rosemary scent that just seemed worth keeping. Thankfully, good taste is still preserved by some festivals, but these are just a handful. It’s also true that everything evolves and flamenco posters eventually change, like everything else. I’m not saying that all of today’s flamenco posters are bad, but more often than not, they’re just ugly. Some people still remember those posters from the final days of the Opera Flamenca festivals, made for the companies of Valderrama, Rafael Farina or Juan de la Vara, which had no artistic merit whatsoever beyond the printed names of the artists.

Then in the 1960s and 1970s the posters usually featured a theme associated with the town of each festival, such as the church’s tower, the main square or one typical corner of the village. Basically, anything that would identify the place, making it stand out. It was a time when great painters, illustrators and photographers would flock to the festivals because they liked the aesthetic character of the small towns and the flamenco performed in those years, which was more traditional and far removed from the flamenco shows for tourists in the big cities. Yet, those artists no longer go to the festivals, perhaps because they don’t like their new format, or perhaps because they miss the stars of those days, artists such as Antonio Mairena, Juan Talega, Matilde Coral, Farruco, Fosforito, Melchor de Marchena, Fernanda y Bernarda de Utrera, Diego del Gastor, José Menese and El Sordera de Jerez.

A while ago I talked with one of these painters who used to go to the flamenco festivals in the ‘60s and he told me that now there was nothing to motivate him to drive on a Saturday all the way to Utrera, Lebrija or Mairena del Alcor. “There is nothing that makes it worth going to those festivals anymore”, he told me. I let him know that I disagreed, because I think there is still something that captures the spirit of those days, but he was partly right. The summer festivals had their golden age in the ‘60s, ‘70s and ‘80s. With the Bienal and other festivals of the same type, such as the Jerez and La Unión festivals, the aficionados have embraced the new format and no longer have the stomach to drive up a rural road to end up listening to the same stuff over and over until dawn. That is clearly reflected in the posters, from where art has virtually disappeared.