The cantaor celebrated the release of his album Por mi amor al arte with a recital in Nueva Carteya (Córdoba). 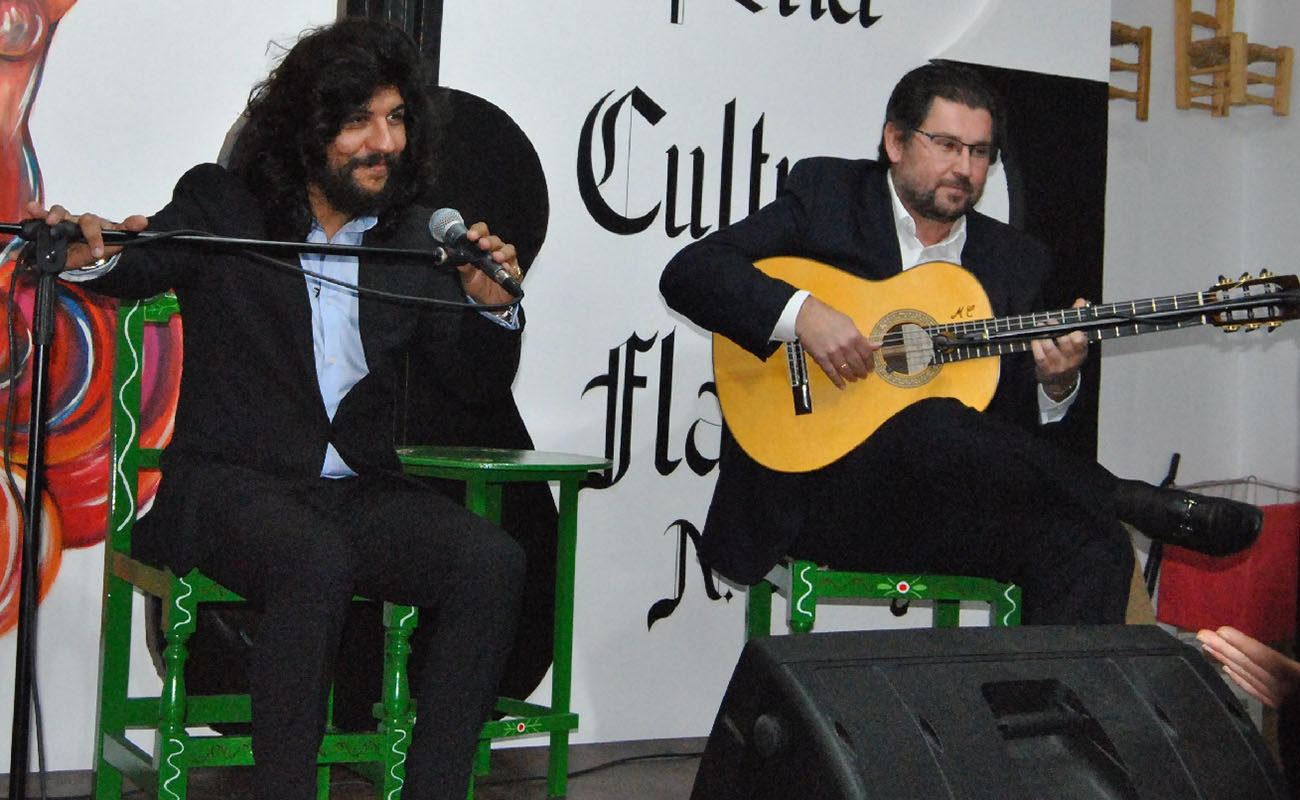 We took a bite off the apple and, as expected, it was delicious. A hundred loyal fans came to Peña Flamenca de Nueva Carteya to cheer their idol. And since we’re here, please sign the album, and let’s take a selfie, because no one can sing any better. The renown of Alonso Núñez Fernández Rancapino Chico (b. Chiclana de la Frontera, 1988) goes beyond flamenco. We can attest to this by looking at the long line of fans, album in hand, parading towards the stage after the recital, seeking an autograph of this Gypsy cantaor, like in a holy week procession, válgame Undivé.

Six prayers, six, prayed the artist in his temple. “I feel at home, and I feel for you the same love that you feel for me”, was the greeting of this cantaor from Chiclana to the audience and to Pupe López, president of the peña. He gets ready and motions his accompanist to set the guitar on six and a half.

Alonso announces fandangos before the intermission. He evokes Caracol, perhaps too much. “This is from El Almendro, that’s from El Gordito de Triana”. “Don’t cry, Carlos, this is just the beginning”. When the cantaorstands up and sings in the style of Antonio de la Calzá, the public sobs. Now it’s time to discuss the cantes in the bar. Some clear their throats, others clog them with tobacco. It’s flamenco, after all.

The guitar of Antonio Higuero Pazos, (b. Jerez de la Frontera, 1969) calls us back to our seats. It’s a Mariano Conde Guitar, made of cypress and rosewood, which cannot possibly sound more flamenca in his hands. Celestial tremolos introduce the malagueñas del Mellizo (the chica and the grande). Poetry played with the left hand. Antonio will take to Jerez the oles he gathered inside his guitar in Nueva Carteya. Where will this love take us? Wherever you want, Alonso. Yet, don’t forget the seguiriya, calls out a veteran aficionado in the back of the room.

There was no seguiriya, something inexcusable in peñas, guardians of traditional flamenco. It’s also true that we never saw so many young people in a peña. Food for thought. Instead of seguiriyas, we get tangosextremeños, those of Camarón and Marelu. And those of Paco Cepero, too, quite a statement of principles:

Antonio Higuero’s rasgueos make the public delirious por bulerías. Let’s listen, please. Silence returns to the peña. Yet, emotions cannot be supressed, and we all know how to clap palmas too. Who can resist those lyrics of Juanito Villar, Pansequito, and Perla de Cádiz? Rancapino climbs on Caracol’s love boat, finishing with the boat of Remedios Amaya. With those boats we get carried away, ending evening with sorrowful hearts again: the cry of Camarón’s fandangos de Macandé, sin sentido y sin razón, perdóname, mare mía.