The 6th edition of Flamenco Madrid will be dedicated to the figure of Camarón, on the 30th anniversary of his death. The festival takes over the streets with performances which are open to the public around Madrid Río during San Isidro.

As the epicentre of flamenco, the Spanish capital recovers and promotes the Madrid Flamenco Festival after a year of absence. And it does so with a return to its origins thanks to a program that combines new artists and some already well-established figures. On Monday, April 25th, the municipal delegate for Culture, Tourism and Sports, Andrea Levy, presented the 6th edition together with the artistic director, Ángel Rojas. Rojas will once again set the pace for this festival having directed all its editions from its creation in 2015 until 2018.

The opening of this unique event was held in one of the new venues on Madrid’s cultural agenda: Palacio de Cristal de la Arganzuela. There, the bailaora (flamenco dancer) Lucía la Piñona, the cantaora (flamenco dancer) María Mezcle and the guitarist Joni Jiménez shared a small piece of their art and talent as a taster of what will be experienced in Madrid from May 11th to the 29th.

One of the main features of this edition is that the festival stretches across twelve stages with performances of singing, dancing, and Spanish dance. However, it maintains its focal point in the Fernán Gómez Theatre, Centro Cultural de la Villa. The aim is to reach the widest possible audience, touch every Madrilenian’s heart, and let the public know that the city of Madrid is Flamenco territory during the month of May.

Ángel Rojas will be directing the festival again after three years: “He’s my little boy”, he declared when speaking about the affection he feels for Flamenco Madrid, which, he recalls, “was born from the impulse of the artists”. This edition “is very close to what I imagined”, Rojas assured in reference to the content and artistic depth that caters to more and less orthodox audiences and “to different sensitivities”.

Schedule of the Madrid Flamenco Festival

Flamenco Madrid’s scheduled performances are varied and diverse. From the most orthodox flamenco, such as Antonio Reyes and Pedro ‘El Granaíno’ in the opening recital with ‘mano a mano’, to more transgressive performers such as Rosario ‘La Tremendita’. In the list of artists, the public will find established names, such as Mayte Martín or Pedro G. Romero, director of Lucía La Piñona. But there are also emerging talents, such as the Chilean Florencia Oz and the young pianist Antón Cortés. Moreover, almost all the scheduled shows premiere in Madrid: either as their first debut or as their first performance on the capital’s stages. There will also be those who will take their first steps as professional artists, participating in the Spanish Dance and Flamenco Choreography Contest from May 11th to the 13th at the Fernán Gómez.

Among the new developments, a new location has been opened to enjoy flamenco with the family in open-air: Quinto de Los Molinos, where dance for everyone is encouraged with José Maldonado and Rita Notuel, as well as group classes with Juan Paredes and Torombo. There is also a chance to discuss ideas and to hear what other arts say about flamenco, such as documentary screenings at the Cineteca Madrid in Matadero and at the photography exhibition by Antonio Gades at the Fernán Gómez. In addition to the variety of stages at the festival is the diversity of artists, with vermouth time performances for Madrid lovers, along with aperitif and concerts in the participating tablaos and the CentroCentro auditorium.

Madrid Flamenco Festival will come to an end at the Sala Guirau del Fernán Gómez Centro Cultural de la Villa on May 29th. It will pay tribute to the renowned figure Camarón, performing 30 años. Las mujeres cantan al mito, through the voices of Remedios Amaya, La Kaita, Montse Cortés and La Fabi. The festival poster was created by the illustrator David Despau. 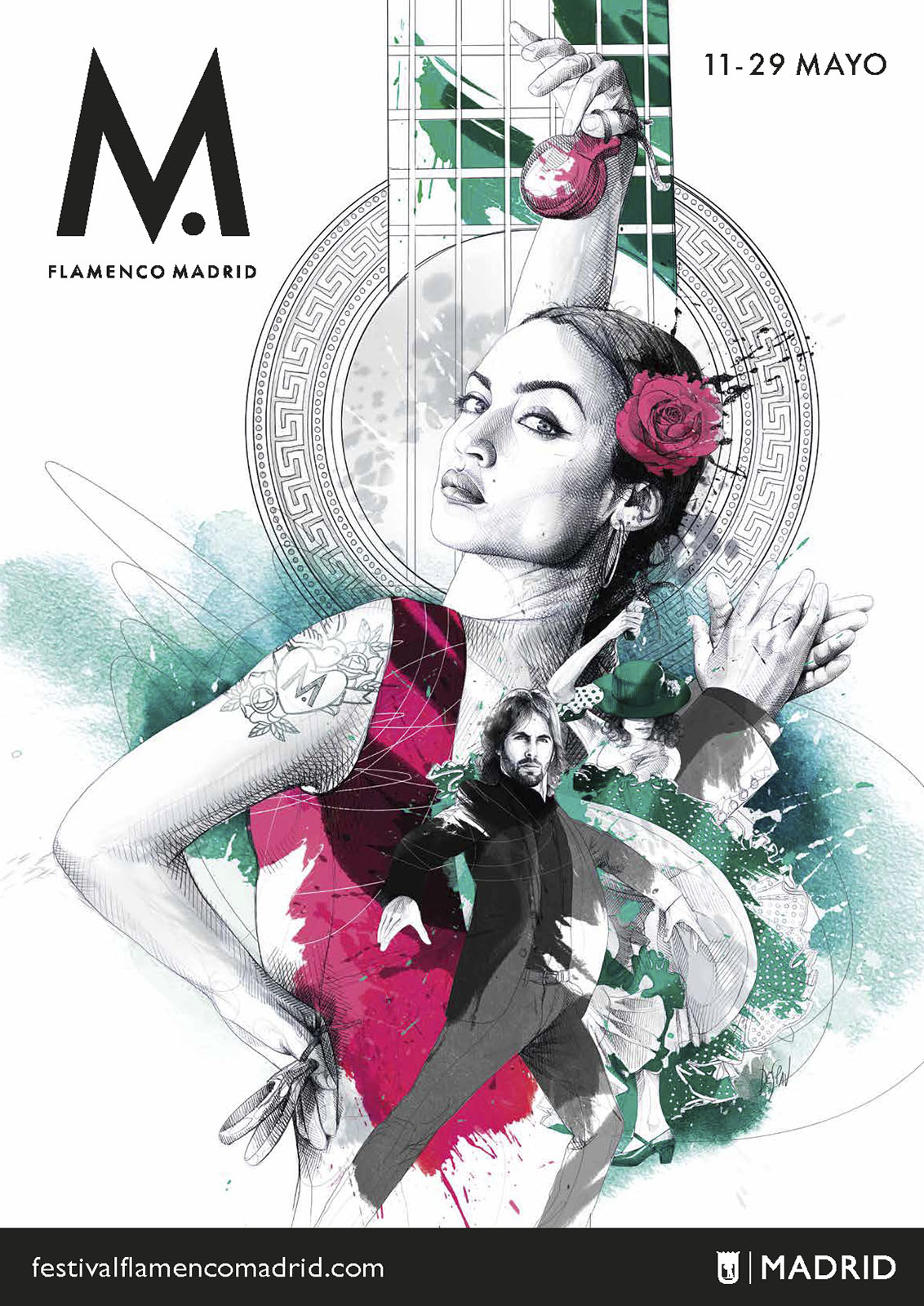